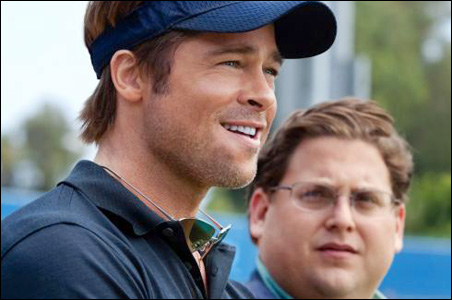 Brad Pitt is a character actor whom Hollywood insists on treating like a movie star, and it’s been bad for him. Some people can carry a film with the sheer force of their charisma. They can settle back into being a cinematic version of themselves, and trust that it’s enough. Cary Grant could. George Clooney can. Brad Pitt, for whatever reason, can’t. It may be that his screen version of himself is underdeveloped, that when he’s called on to do very little, he retreats back to nothing. But his films as a lead actor are notorious for lukewarm reviews and poor box office. “Meet Joe Black”? “Troy”? “The Curious Case of Benjamin Button”? He seemed vaguely absent in these films, and audiences were vaguely absent as well.

But he’s a marvelous supporting actor. All the lazy charisma he lacks in his lead performances were on display in “Ocean’s 11” and its sequels, in which he played a con artist with a grinning insouciance, and spent most of each movie eating, for some reason. He’s gleefully anarchic in “Twelve Monkeys” as a deranged radical; this role turned feral in “Fight Club.” He’s impossible to understand  in “Snatch,” and, as a result, the funniest thing in the film; he moves from incomprehensible to uncomprehending in “Burn After Reading” and the film is the better for it. And he plays his murderous Nazi hunter in “Inglorious Basterds” as broad satire, which would be exactly wrong were he the lead performer; as it turns out, his role is a glorified cameo in the film, and so he’s just right.

I suspect the problem is that he’s a very good-looking man, and Hollywood is at a loss for what to do with good-looking men who excel at being weirdos onscreen. He’s part of a long lineage of mediocre movie stars who are dependably superb in character parts, including James Caan, Alec Baldwin, Johnny Depp, Mickey Roarke, and, most recently, Colin Farrell. They all suffered for their good looks, and spent good portions of their career at sea, so to speak, playing attractive nonentities in undistinguished films until their either took control of their careers or aged out of movie stardom. Either way, all are at their best being more or less bonkers onscreen.

Brad Pitt is getting older. He’s closing in on 50, although, thanks to the miracle of whatever genetic lottery he won, coupled with hours in the gym, he’s a 47-year-old with the face of somebody in their 30s and the body of a teen athlete. Nonetheless, he’s old enough that he’s started to age past pretty-boy roles and starting to grow into the sorts of roles that he might not have been considered for earlier. Case in point: “Moneyball.“

He plays a real person in this film, Oakland Athletics General Manager Billy Beane. In fairness, the actual Beane is a good-looking man, but this is not a film that is concerned about appearances. Far from it, the movie is based on an epochal shift in the way professional baseball is scouted. With the help of a Harvard economics grad named Paul DePodesta (played in a slightly fictionalized role here by Jonah Hill), Beane applied something called sabermetrics to the A’s. Previously, players had been scouted for batting average, skill in a particular position, and such intangibles as how good-looking they were. Sabermetrics throws that all out in favor of number-crunching and bean-counting, and, in this film, it really boils down to one question: Does a player get on base? If yes, they’re good for the team. If no, they’re not.

This shouldn’t have been as big a deal as it was in baseball, which, after all, is a game that seems to turn even the casual fan into an obsessed statistician. But it meant putting people into play who had been abandoned by the rest of baseball, and, to conventional wisdom, this looked like madness. In fact, famously, it helped the A’s come in first in American League West in 2002, and earned them a record-breaking streak of 20 consecutive wins, despite the team working with a budget that was one-third that of the New York Yankees, and despite the team having been gutted for its best players by richer teams.

It’s a good story for film, because it has an enjoyable up-the-establishment vibe to it, and it’s always nice to see a film in which underdogs change the world because they have better ideas. But it’s also nice to see, because this film was scripted, in part, by Aaron Sorkin, and Sorkin has always been less concerned with stories of attractive people doing good-looking things attractively, and instead has gravitated toward stories of oddball characters doing genuinely remarkable things. And so “Moneyball’s” Billy Beane isn’t a charmer, and has, in fact, been burned by his having been a good-looking kid. He was recruited out of high-school into an undistinguished career as a ball player, a source of ongoing frustration for him. And so he has aged into a prickly middle-aged man with a temper problem, a habit of chewing mouthfuls of seeds, and an impatient sense of humor. And that’s a role Brad Pitt can play.

In fact, despite the presence of Jonah Hill, who is usually a film’s resident smartass, it is Pitt who gets most of “Moneyball’s” punchlines. (Hill, to his credit, falls back on a wonderful ability to look out of place, which the film makes great use of.) Pitt deals with management with a lopsided, devil-may-care grin that seems false, and is. Down in the bowels of the O.co Coliseum, he’s an impatient, chastising force, given to temper tantrums and moody moments where he sequesters himself, either in the gym or in his own car, and refuses to listen to his team’s games or communicate with anyone on the team. Pitt plays it as a character part, as it is meant, and, as a result, he’s enormously interesting to watch.

This is the leading man Brad Pitt should always have been; he’s best at starring in a movie when he isn’t expected to be a movie star.

Why Brad Pitt isn’t a movie star, and why ‘Moneyball’ is the sort of film he should star in