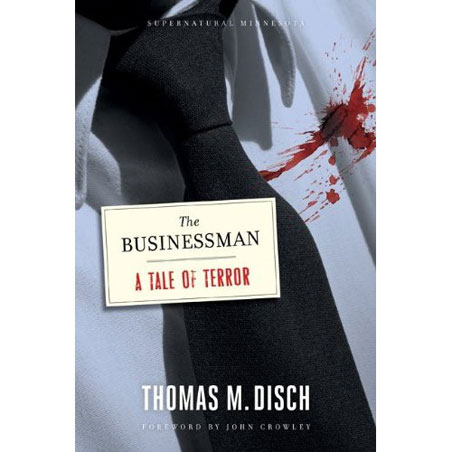 Photo courtesy of University of Minnesota Press
“The Businessman: A Tale of Terror” by Thomas M. Disch

I’m not one who believes in ghosts — at least, not until 3 a.m., when I bolt up in bed, certain somebody is in the room with me, and must give myself an hour before my heart settles down and I convince myself that the shape in the corner of the room is just a pile of clothes. Then I can return to unbelief, although that doesn’t mean I won’t keep my eye on that clothes pile, just in case.

But I do believe in ghost stories.

Let me explain. I think we live in a world that doesn’t have a history, but, instead, histories. It’s easiest to see this as it’s being made — the next few years we will probably see a lot of jockeying over who gets to claim the democratic revolution that is sweeping through the Middle East. Some will claim that it was George W. Bush, as this is precisely what the invasion of Iraq was supposed to produce. Some will claim it was Barack Obama, with his address to Cairo in 2009. Some will point to WikiLeaks, or Twitter, or some other technological innovation. And I feel certain that Middle Eastern historians will have their own stories in which western influence is absent. This may never be settled and made official. Some things aren’t, and are just a bone of contention forever.

The same is true of regional histories. Most places have local historians, or history centers, which will be happy to tell you tales of old industrialists, or famous people birthed in the town, or when the first school was built. This is the easily accessed history, and becomes sort of the official history. But then there are the stories people in town tell each other, and these tend to be stranger and more gossipy. I call these the folk histories of a place. One of my favorite books, “Peyton Place,” is essentially a fictionalized folk history of a town: a detailing, for a brief time, of every affair, ever terminated pregnancy, every runaway, and every murder.

These are the stories that are left off the official record. Nobody talks in a very public way about the suicides, the madhouses, the industrial fires that killed 12 people one July summer. Except in the ghost stories they tell. Sometimes a ghost story is just an urban legend — you hear about a little girl haunting a bed and breakfast and dig through the newspapers, but no little girl ever died there. All theaters in America are haunted, as actors are a primitive, superstitious lot, just one step removed from cavemen. This fact made it into the “Prairie Home Companion” movie, which hints at the reputed hauntings at both the Fitzgerald Theater and the Chanhassan Dinner Theatres. Actors.

But sometimes you dig and you find a real tragedy behind a ghost story, forgotten but for the tales of the anguished spirits they leave behind.

Let’s look at the Washington Avenue Bridge, as an example, which spans the Mississippi River and links the east and west banks of the University of Minnesota. This is undeniably a location of tragedy. Poet John Berryman, for example, took his life by leaping from the bridge, and there’s a similar suicide every so often. When I was a student at the university, a fellow student wrapped himself in his vintage comic book collection and took the fatal dive, a fact that I remember only because of the odd detail of the comic books. And so the bridge had developed a reputation for ghosts — so much so that there is a Facebook group dedicated to the subject, although it seems to have fallen into disuse. According to the stories, the pedestrian part of the bridge is the location of unidentifiable footsteps and cold spots, although one poster on the Snopes website claims to have been approached by a man on the bridge who then disappeared.

Writer Thomas M. Disch was raised in the Twin Cities, and, between 1984 and 1999, set a series of novels here, collectively called the “Supernatural Minnesota” series. His first novel in the series, “The Businessman: A Tale of Terror,” details a collection of ghosts united to redress a murder, and among them is John Berryman. He has been refused the opportunity to move into the afterlife as punishment for scorning another poet, and may not travel more than five miles from the Washington Avenue bridge, where he mopes about and reads poetry. Disch hadn’t written much supernatural literature before this series of novels — he made his reputation as a participant of science fiction’s literary and experimental period in the ’60s and ’70s, called the New Wave. But “The Businessman” is vintage Disch nonetheless, revealing a prickly imagination that delights in upending expectations. The book’s ghosts are its most sympathetic and human characters, while the world of the living is where monsters live, in the form of the titular businessman, who is as psychotic and inhumane a character as has ever been written. The rules of the world of the dead are idiosyncratic and seemingly arbitrary, and the afterlife is essentially a well-kept shopping mall.

There may be no such thing as ghosts. I hope there aren’t, but that pile of dirty clothes just moved. Nonetheless, there is such a thing as hauntings. John Berryman died in 1972, and that could have been it — he may have entered the official record as a terrific poet who met a tragic end, and any further interest in him would have been literary or biographical. But can anyone honestly say Berryman — in memory if not in fact — hasn’t been haunting the Washington Avenue Bridge ever since?

Now, if you’ll excuse me, I’m going to go hide in the closet until it’s light enough for me to figure out just what is happening with my laundry.