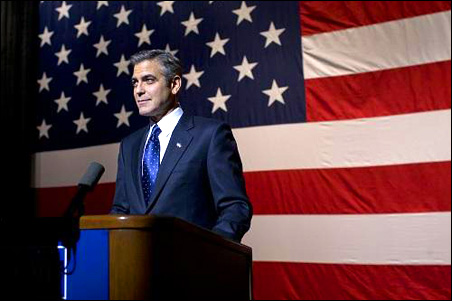 Sometimes there are rumors that George Clooney will go into politics. He’s charismatic. He’s statesmanlike. He’s aged and pepper-haired into an iconic American face. Besides that, he’s a political fellow, with strong, public opinions. Never mind that he remains unmarried, reeks of Hollywood liberalism, lives in Italy for part of the year, and was arguably the worst screen Batman, all of which are potential political liabilities in an election.

Clooney cowrote, directed, and acts in “The Ides of March,” and if this film is any indication, we won’t be seeing George Clooney on a ballot any time soon. I haven’t seen the original stage play it is based on, “Farragut North” by Beau Willimon, so I can’t tell whether the cynicism found in “Ides” comes from the source material and was what appealed to Clooney, or if that was something he added in to the eventual film. But, make no mistake, this is about as cynical a film as has ever been made about the American political process. And that’s saying something, as American political films may be the most cynical of all cinematic genres.

Clooney’s film is a bleak one, telling of a heated primary race and following the shifting fortunes of a political consultant, played by Ryan Gosling. They say you don’t want to see how law is made any more than you want to see how sausages are made, but in the sausage factory of Clooney’s film, the only winning strategy is pure opportunism. We’re told Gosling’s character is a smart man, but there is scant evidence of it — he’s gets played very badly in several cutthroat maneuvers. We’re told that the candidate he represents, played by Clooney, is a good man and would be good for the country, but we have to trust this to be the truth, and the film gives us ample evidence that this man is easily corruptible. You get no marks for loyalty here — the one character who prides himself on it gets railroaded. And good politics doesn’t even matter — the entire election looks likely to be determined by the Republican machine organizing to get the weaker Democratic candidate pushed through the primaries, or by a sleazy Democrat who will put his weight behind whoever pushes him up the totem pole in their cabinet.

As with Bill Clinton, a lot of the story revolves around an intern, a character we’re told is 20 but is written, and played by Evan Rachel Wood, as though she were in her mid-40s, right up until the moment she has to act like an adult, at which point she reverts to being a helpless teenager. She’s the weakest thing in the film, a variation of my least favorite cinematic trope, that women exist as spoilsports. Generally, their spoilsportism is volitional, and they appear as the frowning wives and girlfriends of immature men and their entertainingly stupid lives. In this case, the spoilsportism is entirely accidental, in that Wood’s character just can’t help but blunder about and ruin things, including herself. Either way, it’s just an iteration on a trope, with men plowing along doing the things that men do, and filmmakers think is fascinating, until a woman enters the scene and everything stops being fun. In Clooney’s film, the only thing more dangerous than politics is nubile interns.

In light of this, is was sort of nice to watch a film called “The Personals,” which was filmed in the Twin Cities, with Twin Cities talent, back in 1982. It was written and directed by a fellow named Peter Markle, who has gone on to quite a successful career directing for television. I am not quite sure why it was filmed locally, but for the fact that about half of the film is spent roller discoing around a lake, and we have plenty of those.

The film explores the world of newspaper dating, which was, to a certain extent, still something of a novelty back then — at least, it was a new enough and significant enough development to be worth an entire film. So it follows the romantic misfortunes of a magazine editor, played by Bill Schoppert, whose divorce causes him to seek companionship through the back pages of the Twin Cities Reader. When I worked at City Pages, 20 years later, these back-page personals seemed primarily devoted to fetishists, swingers, and … shall we say working girls. At the time this film was made, it seemed to be able to net Schoppert an actress named Karen Landry, who is still around and still excellent, and just completed a run at the Park Square Theatre.

Of course, all romance brings complications, and this one brings its own. But none of it is caused by a woman trying to ruin the fun, and at least Schoppert always has the system of lakes and some disco music, both of which he takes to avidly nurse his broken heart.

The 1985 film “Desperately Seeking Susan” also based itself around misadventures that result from newspaper lonely hearts ads, but with a sort of new wave screwball sensibility, where answering an ad in Manhattan can lead you on an accidental tour of the city’s downtown nightlife scene. In fact, there is a character in “The Personals” who seems to be living a Twin Cities version the other film — a decidedly punky young woman who comes into The Reader office weekly to claim hundreds of pieces of correspondence from potential suitors.

It’s hard not to be curious about what her story is, but instead we follow two heartsick lovers entering middle age and making awkward attempts at re-entering the dating scene. Roller discoing notwithstanding, the film’s story is that of how the unhip love each other. Mostly it seems to involve cocktail parties where people make flat jokes borrowed from New Yorker cartoons, but they’ve also gotten to the age where everybody is a little forgiving of each other’s nebbishiness and neurosis. Up to a point. Beyond that point is heartbreak, which comes to the hip and square alike, without any need for a meddling intern.