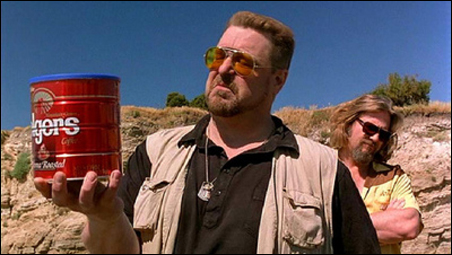 PolyGram Filmed Entertainment
John Goodman and Jeff Bridges in a scene from “The Big Lebowski.”

This Friday, I think I’ll offer up a few arts-and-culture odds and ends that have been bouncing around my head but that I don’t have enough to say about to devote an entire column to. Think of this as a sort of Max About Town as though written by Larry King, back when he had his column in USA Today, consisting entirely of random musings connected by ellipses: Whoever invented zippers for pants should win a McArthur genius grant; I’ve tried button flies and they are terrible … It’s about time Hollywood recognized the talents of the extraordinary Jill Eikenberry and gave her her own show … Note to self, buy toilet paper … Frank! Frank! Is that you?

Firstly, I want to talk about “The Big Lebowski.” I warn you, however, the following comment spoils a plot point, so if you haven’t seen the film, well, go see it. It came out in 1998. What have you been waiting for? When I recently visited Los Angeles, I stopped in Malibu to watch the sunset from a bluff over the ocean called Point Dume. It’s a popular filming location — the climactic scene in the original “Planet of the Apes” took place here, with Charleton Heston making a terrible discovery on a beach that I won’t detail in case you haven’t seen that film either.

In “Lebowski,” the title character, played by Jeff Bridges, goes out to Malibu to meet a pornographer named Jackie Treehorn, who is throwing a beach party just below Point Dume consisting mostly of very happy men tossing a topless woman into the air using a fireman’s canvas life net. Later, Lebowski will have a run-in with the sheriff of Malibu, who will tell him, in no uncertain terms, to “stay out of Malibu.”

Lebowski is no pushover, but he can be a little passive-aggressive, and Point Dume offers up one of the subtlest examples of this. Because later in the film, one of Lebowski’s friends dies and Lebowski participates in scattering the ashes. Now, I’ve probably seen the film 50 times, but it wasn’t until I visited Point Dume that I realized how subtle and how total Lebowski’s passive-aggressive revenge was. Because not only does he return to Malibu to dump the ashes, in violation of the sheriff’s demand, but he returns to Point Dume, bespoiling the exact spot where Jackie Treehorn throws his parties.

I will note that there is some argument about where the ashes-dumping scene was filmed — some maintain it was shot at a spot considerably south of Point Dume. Regardless of where it was actually filmed, I went back and looked at the shooting script, and it specifies Point Dume. I expect this is the sort of thing that will only be of interest to Lebowski fanatics, but I think it points to just how minutely detailed the Coen Brothers were in making what is, at is at its core, a very silly film. It genuinely is possible to watch the film for 13 years and still discover new things in it.

The Coen’s are, famously, St. Louis Park natives, which was also one of my early childhood neighborhoods. I don’t know if this is a uniquely creative neighborhood, or if I am just more alert to the creative people who have come out of it as a result of my connection to it. Nonetheless, when I was a boy, I was babysat at one point or another by two brothers, Matt and Dan Wilson. Those two would eventually go on to be in a popular local band called Trip Shakespeare, and later have separate careers, with Matt soloing and Dan founding Semisonic, and also netting a Grammy or so as a songwriter. I don’t presume most people have future Grammy winners as babysitters, so I can’t help but wonder if there is something about St. Louis Park that inspires creativity.

Another data point: Dan Israel. I have been meaning to write about him for a while, but just haven’t had the chance. Israel has been forging a career as a singer/songwriter here in the Twin Cities for years, producing 11 albums or thereabouts, as a soloist and band member, which is nothing to sneeze at. Nobody really likes to have their music reduced to a few lines of description, but I am going to do it anyway. You musicians do your job, I’ll do mine, and mine is to offer descriptions. So: Israel’s songwriting is smart, well-formed rock ‘n’ roll that is very much to my ears in the tradition of the sharp and sometimes angry singer/songwriters of the the late ’70s, such as Nick Lowe and early Elvis Costello. A few days ago, on Twitter, Israel also joked that he constantly lifts from Tom Petty, and I can hear the Petty influence, as Israel likes jangly guitars and crisp pop melodies. Everything I have heard by him is unambiguously terrific.

Oh, and did I mention that he attended the same grade school I did? Fern Hill in St. Louis Park. He was in my brother’s class, a year behind me. So, St. Louis Park, represent.

I suppose, since I’m on the subject of St. Louis Park, I shouldn’t stop there. The neighborhood was, back in the ’60s, the home to the Dove recording studio, which was a popular studio for Minnesota’s garage rock scene. I could write an entire book about this subject, but, in this case, I’ll stick to one song. Depending on your tastes, it’s either the best or worst song ever recorded. 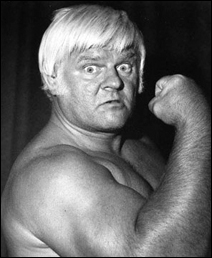 The song is called “The Crusher,” by a band called The Novas out of the Morningside neighborhood of Edina. They were all teenagers when they recorded, and their singular contribution to music is their ode to professional wrestler Reggie Lisowski, better-known as The Crusher. Their song consists entire of unveiled threats to perform various wrestling feats, coupled with calling the listeners “you turkey necks,” which was an epithet favored by The Crusher.

I don’t know precisely what to say about the song, except its utterly memorable. It was deemed awful enough to be included on the Rhino compilation “The World’s Worst Records,” along with such infamous outsider artists as John Waters mainstay Edith Massey, rockabilly howler the Legendary Stardust Cowboy, and paranoid-schizophrenic rocker Wild Man Fischer. The song also inspired The Cramps enough to record a note-for-note cover.

The Crusher’s legacy is responsible for an additional, unrelated song by The Ramones, but to my tastes, it is The Novas’ version that best captures his memory. But, then, I’m biased. I’m a St. Louis Park boy.