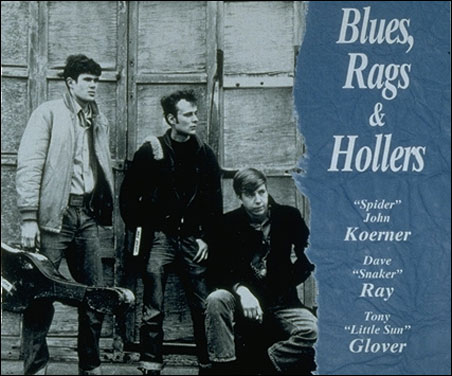 Audiophile
“Blues, Rags and Hollers” by Koerner, Ray, and Glover. A film of the same name was produced in 1986 by Tony Glover.

I was, in my teens, what I suspect many become in their middle age: A Minnesota Public Radio folkie. For whatever reason, in my last few years of high school I started moving away from popular music to see what other music the world held. At that time, this was done by running the dial up and down the radio to see what else might be out there. It would settle for some months on an oldies rock station, and for a few months on the sort of vocal pop I then associated with dentist offices and Lawrence Welk, and, for a while, the radio landed on an AM country-music station.

I picked up a little here and there. I picked up a lot from Minnesota Public Radio, particularly from “The Morning Show,” which, at that point, was showcasing much the first album released by Iowan (and regular “Prairie Home Companion” performer) Greg Brown, a marvelous collection called “In the Dark With You.” I suppose folk had always been creeping around in the back of my consciousness, but I associated it with wan women strumming autoharps while sharp-featured men with beards and voices like billy goats bleated out the indigenous music of the British Isles — a style of music that I later developed a great affection for. But Brown wasn’t like this, or, I should say, he wasn’t precisely like this. There was something of the billy goat to him, but his singing voice was deep and growling, less like a goat than a black bear. He played forceful, expressive guitar, often backed by a howling harmonica, and his lyrics were laden with ironic turns of phrase.

I hadn’t heard music like this before, and I sought out more of it. There wasn’t much, of course — I didn’t know that Brown was drawing from a different well from most folkies. There was a British Isles influence, yes, but there were also hints of country and folk blues there, and I wouldn’t hear them again until I entered college, in 1986, when Spider John Koerner put out a collection of songs called “Nobody Knows the Trouble I’ve Been.” At first blush, the album is a bit of a headscratcher, consisting entirely of the sorts of songs you might sing around a campfire at a summer camp. But Koerner took to them with what I call only describe as full-throated lust, and so if you’ve ever wanted to hear “Froggie Went a-Courtin’ ” performed as a rent party song, this was the album for you.

I speak of rent parties, but I only know of them because of Koerner. I traced his history back to his earliest recordings, as part of Koerner, Ray, and Glover, who were both oddities and defining artists of the ’60s folk scene that floated like a boozy Beatnik satellite around the University of Minnesota. There were what sounded like somewhat reedy intellectuals in Dinkytown at the Five O’Clock Scholar, the venue that gave us Bob Dylan. And then there were drunken misfits and dropouts in Seven Corners and Cedar Riverside, who gathered on a weekly basis to throw parties with live music, hoping to collect enough money to pay their rent. Koerner, Ray, and Glover were very much part of this scene, and, although they were white boys from the Midwest, their tastes were decidedly for the country and folk blues of Mississippi.

I’m thinking about them just now because, thanks to the miracle of the Internet, it is now possible to watch a two-hour documentary about the trio, filmed back in 1986 and called “Blues, Rags, and Hollers,” which was also the name of the trio’s first album, recorded in 1963. The film was produced by Tony Glover, the harmonica player in the trio, and directed by Glover and Gail Glaser; as a result, the documentary is about as autobiographical as a documentary can get, and draws on an extraordinary wealth of archival material. It also charts the odd transition culture often makes, over decades and often accidentally, from disreputability to reputability. Koerner, Ray, and Glover started off pretty chaotically — as they repeatedly point out, they never rehearsed, and virtually never performed live as a trio. They were frequently drunk at gigs, and quickly separated off to pursue their own idiosyncratic projects, some of which, to my amazement, I had never heard of until watching this documentary.

For instance, while I knew that Koerner and local pianist Willie Murphy released an album together called “Running, Jumping, Standing Still” — a classic collection of what Crawdaddy once called “psychedelic ragtime blues” — somehow I missed that the pair had made a movie immediately afterwards called “The Secret of Sleep.” From the scenes shows in the documentary, it seems to consist mostly of Koerner and Murphy running through the woods as skittering figures in police helmets chase them. Apparently, after its first screening, it was mothballed for 20 years, and remains rarely shown, but I find it oddly exciting to discover that Minnesota produced its own hippie freakout movie.

I also didn’t know about Bamboo, a psychedelic band that Dave Ray had for a short time in the late ’60s, and, in the documentary, recalls with no small embarrassment — but it has piqued my curiosity. I have found that artists are universally undependable in their self-assessment, and often dismiss their most interesting work. Screamin’ Jay Hawkins wanted to be an opera singer, which he would have been terrible at, but have him gibbering while emerging from a coffin and he is magic. I don’t know whether Bamboo is good or not, but I am not going to take Ray’s testimony at face value without giving it a listen of my own. I have a taste for psychedelic music — dating back to the same time I discovered folk music — and I’ll be the judge as to whether Bamboo was a misfire or a forgotten minor classic.

Dave Ray died back in 2002, but it’s still quite easy to see Koerner or Glover play around town, sometimes together. I saw one or both of them (both, as I recall) at the Mill City Museum a few summers ago, playing 50 years of their own material and another few decades of music from the Mississippi Delta, and some songs that probably date back further than that. The audience was decidedly middle aged and decidedly sober, and that was fine — after a certain age, if you’re still engaging in a certain sort of reckless behavior, it no longer means that you’re a rebel, it means you have a problem. I’m past that age myself, dammit.

The music is still great, but I was born too late for the rent parties, and so there is a certain frustration at this, and I certain satisfaction that at least Glover preserved its stories in film. I prefer music when it is still disreputable.

‘Blues, Rags, and Hollers’: Looking back at Koerner, Ray, and Glover