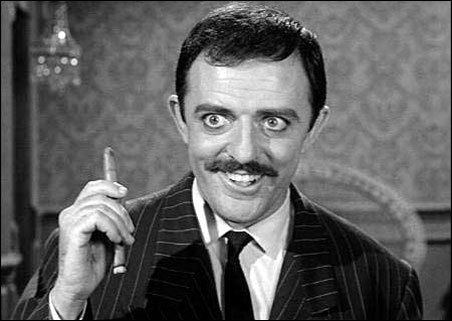 Courtesy of ABC
John Astin in “The Addams Family.” A Minnesotan? Yes, if we say so, he is.

Minnesotans have awfully ambivalent feelings about celebrities. If you want to get on everybody’s nerves locally, get famous.

For some reason, Minnesotans have their own version of what Australians call “tall poppy syndrome,” where, if somebody seems like they may be getting too big for their britches, they have to be brought down. There is almost no culture of local celebrity in this town, and what there is isn’t taken very seriously. C.J. at the Star Tribune? LOL/OMG? Neither have nearly the cultural impact that, say, Hedda Hopper or Walter Winchell did.

C.J.’s column seems like an afterthought at the Strib, especially as she’s never discovered Gawker’s secret, which is that the job of a gossip columnist is not merely to tear down already established celebrities, but to create new ones. LOL/OMG, in the meanwhile, seems like a group of friends retweeting each other, and I say this as someone who has been both quoted and had photographs on the site.

But we live in a celebrity-obsessed America, and Minnesota is not immune to that, and so it manifests itself oddly. My favorite example is our tendency to claim existing celebrities as our own, however slight their connection to the Twin Cities — a recent example was Thursday’s Pioneer Press headline about the Grammies, which identified Bon Iver as a local band. Bon Iver is from Eau Claire, Wis.

Other examples: Judy Garland, who was born in Grand Rapids but left Minnesota sometime before her fourth birthday. Vince Vaughn, who was born in Minnesota but likewise relocated when very young, and identifies himself as a Chicagoan. Both Garland and Vaughn have stars on the Minnesota walk of fame, a fact that seemed to startle Vaughn when he received it. “Thank you for thinking of me that way,” he said. What way? As Minnesotan, presumably.

I’m guilty of this, too. Heck, probably more so than anybody — I don’t suffer tall poppy syndrome, and so am more than willing to claim famous people as Minnesotan, or insist that never-were Minnesotans are actual celebrities and should be treated as such. If you’re a local theater person, there is a good chance I have written a gossip column about you, like you were Pia Zadora. So here’s my list of a few folks who merely passed through the Twin Cities, but I’m going to go ahead and claim them anyway.

Nudie Cohn: The name may be unfamiliar, but to anybody familiar with the golden age of cowboy movies, his work is instantly recognizable — he created the look of the cinematic cowboy. He formerly created costumes for burlesque dancers, and just applied that aesthetic to Western wear when he opened a shop called Nudie’s Rodeo Tailor in North Hollywood. His creations dripped with rhinestones, appliques and elaborate piping, and he was responsible for a number of designs that are now iconic: Hank Williams’ musical-note-bedecked white suit; Elvis Presley’s gold lame suit; Gram Parsons’ needle- and pill-covered suit from “The Gilded Palace of Sin.”

Minnesota connection: He lived here for a few years during his migration from the East Coast to Los Angeles, and his wife, who eventually took over his business, was a Minnesotan.

Ted V. Mikels: Filmmaker Ted Mikels is both a legend as a cult item and as a person. The grinning, swooping mustachioed filmmaker wears a boar’s tusk as a necklace and once lived in a castle in Glendale with a harem of girlfriends. He is responsible for a slew of cheaply made exploitation films that generally overcame their financial and artistic limitations, and are instead balmy minor classics of independent genre filmmaking. These include “The Corpse Grinders,” in which a beatniky cat food manufacturer turns to the local graveyard for a meat source, “The Girl in the Gold Boots,” about a go-go dancer in the Hollywood of the swinging ’60s (and mostly set in a haunted house-themed nightclub), and “The Astro-Zombies,” about murderous, reanimated, solar-powered astronauts.

Minnesota connection: He was born here, although I once emailed Mikels about the fact and he admitted he has almost no memory of his early childhood here, although he remembers coming out for family events now and then.

John Astin: A google-eyed actor with a mischievous grin, Astin is primarily famous for two things: playing Gomez in the original television version of “The Addams Family,” and his marriage to Patty Duke, which produced actor Sean Astin, best-known as Samwise Gamgee in “Lord of the Rings.” Sort of. Sean was actually Patty Duke’s child from another marriage, but John Astin adopted him.

Minnesota connection: It’s not mentioned in his official bio, but he did graduate work at the University of Minnesota, studying drama. He dropped out.

Marlon Brando: This one is a reach, but with an actor like Brando, it’s worth the reach. After all, the once-handsome, always deeply eccentric film actor was almost single-handedly responsible for bringing Method to the screen, replacing a subtle, East Coast-inflected dramatic screen acting with a style that critics reduced to mumbling and scratching, but was, in its time, electric. He remains one of the most interesting actors in film history, gravitating toward wildly ambitious (if sometimes wildly unsuccessful) projects. When Brando died in 2004, it was one of the signifiers of the end of the 20th century, along with the death of Frank Sinatra — for many Americans, these were two of the defining voices of the entire second half of the 1900s.

Minnesota connection: For a while, Brando attended the Shattuck-St. Mary’s School in Faribault, a private prep school best known for its elaborate “crack squad,” which performs military-style drills. Brando was kicked out before graduating.