We live in a germophobic time, and perhaps we should. Our medical horror stories are now ones of tiny monsters that invade our bodies, and how they have evolved to be resistant to our defenses against them, and so they ravage us. There was a web hoax about two years ago, a fictional blog authored by a man who claimed to have smacked into a wall and hurt his eye. He tells of going to the doctor, who discovers his damaged ocular orb has been infected with flesh eating bacteria. A day later, his eye is gone. A week later, the author is gone, as a postscript on the blog by his fictional loved ones informed horrified readers. The story wasn’t true, but was passed around, the way things are on the web, via email and discussion forums. Because it felt true. It felt like stories we hear in the news, of newly hulked up germs running rampant.

There’s a more recent tale that has been kicking around the Internet, telling of a lab in Rotterdam that has created a strain of H5N1 avian influenza that can be transmitted between ferrets. Bad luck for ferrets, you might think, but, apparently, if a ferret can catch this strain of the flu, so can a person. And if the virus got free, it could, the stories tell us, kill millions. Science Insider quoted one of the scientists behind the project describing their invention as “probably one of the most dangerous viruses you can make.” One immediately gets visions of Gwyneth Paltrow hacking her way through the Minneapolis-St. Paul International Airport.

Perhaps it was inevitable that the subject would be tackled by comics — it’s a format that has always seemed to address our mass subconscious most directly, dramatizing our national hopes and fears — and the medium has done so knowingly. After all, when E.C. Comics found they could no longer represent neurosis and nightmares abstractly, through their newly banned signature line of horror comics, they experimented with addressing them directly, through a comic titled “Psychoanalysis.” Sometimes it doesn’t pay to be too literal, though; news vendors refused to display this new title.

Illustrator, writer, and editor Lupi McGinty seems to have learned that lesson, offering up our current germophobia as a series of short, comic parables in the newly published “Germ Warfare.” This anthology, featuring nearly a dozen stories by a collection of Minnesota-based writers and illustrators, alternates between the point of view of humans, besieged by germs, and germs, who are engaged in a struggle for survival that depends on them infecting a host. In fact, the very first story, “D-Co’s Throat” by Lance Ward and David Cohen, follows a group of germs desperate to find something to infest. The whole of it is written as a satire of one of E.C.’s more successful comics line, their true war tales, and so the germs in this story wear helmets, dog tags, and bandoliers of rifle shells. Humans are both this groups’ target and its enemy, and they wield antibacterial lotion like napalm, burning through the infantry of germs. 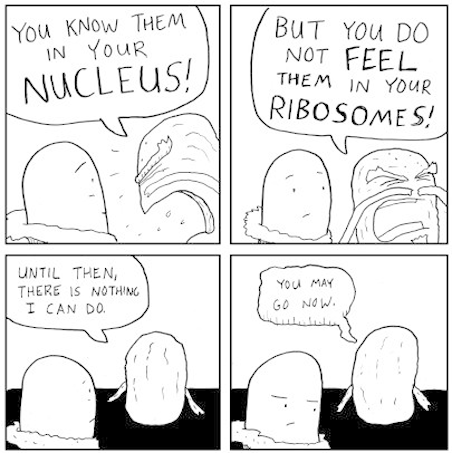 Illustration by Ryan Dow
An excerpt from “Germ Warfare: An Anthology of Comics for Germs and Their Generous Human Hosts,” edited by Lupi McGinty

The anthology’s germophobia is given its most literal expression in a pair of characters created by McGinty named Stew and Beryl Sterrel, whose fear of germs reach a literal boiling point when one chooses to disinfect himself by plunging his hands into scalding water. Ridiculous as this may seem, the couple inhabit a cartoon universe where germs can literally vaporize visiting space aliens and dissolve a human corpse, and even the small colds and chills they cause are causes of personal agony and social embarrassment. Not that the germs have it any better, as their world is a constant fight for survival, not simply against human defenses but against other germs. One cartoon has a group of germs, dressed and behaving like Aubrey-Maturin British seamen, pleading with Beryl to swallow them or they shall surely perish. Any port when at a storm, it seems.

It’s all meant in a spirit of fun — this is not a science textbook, but a series of comic fables told about our uneasy relationship with the tiny organisms that are, in a sense, eating us. I am not sure precisely what prompted this project — I have met Lupi McGinty a few times, and she’s cheerful and energetic and, I take it, given to what she calls “nutty” ideas in the dedication of this anthology. But this seems like a sort of inevitable project to me, after the swine flu scare that, for its duration, felt very much like a war was upon us, including contemporary versions of propaganda posters. Instead of being warned that loose lips sink battleships, we were instructed to sneeze into our shoulders, and little kiosks of antibacterial hand rinse showed up throughout the Twin Cities. I can’t imagine I was the only one who started cleaning my  hands with a frequency and dedication that previously was identified with obsessive-compulsive disorders.

The worst part is that I can’t tell whether that behavior was excessive, and deserving satire, or entirely reasonable, and now that I don’t do it anymore, I have returned to a sort of unintentional squalor that will certain lead to an invasion of germs, as soon as they regroup. It is a sort of war we’re fighting, and have been ever since the first microorganism hitched a ride on the first animal, and it’s a war that neither side can hope to win, except by detente. A germ that is too aggressive will kill its host, and itself, but if it isn’t aggressive enough it dies, or is killed by its host’s natural defenses. And every time we sneeze, or leave food out for too long, or touch our faces, or kiss, we are creating new battlegrounds in this war, and what can we do about it?

Sneeze into our shoulders, I suppose, and, with this anthology, try to laugh about the subject a little.

‘Germ Warfare,’ a new comic anthology about what’s eating us