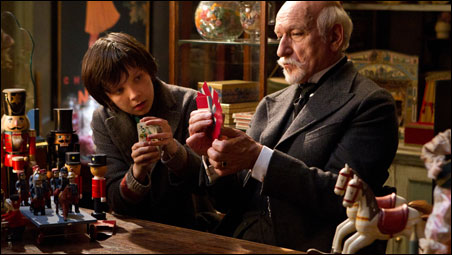 People have been quite fighty about the subject of 3D lately. Roger Ebert, in particular, has mounted a campaign against the technology, arguing that it’s a cheap gimmick used by studios to goose profits, contributes nothing to the completed films, and actually hurts your eyes. I argue this is true of a lot of what goes into film, such as Miley Cyrus. I think my own taste for 3D was, at first, nostalgia, as I associate the technique with old horror movies, where it was always welcome. But later I stumbled on a series of comic books put out by a man named Ray Zone, who meticulously adapted old comics to be viewed with the classic red and cyan cardboard glasses, and his artistry was unmistakable.

Zone brought something to his work that was considerably more exciting than, say, men in ape suits emerging from Bronson Canyon. His adaptations were set in a world of real depth, which was ideal for comics, which was always a medium that favored such tricks of perspective as Dutch angles, foreshortening, and thrusting the action forward, as though it were bursting out of the frame. Converted to 3D, they looked as though they had always been intended to look like this.

Alfred Hitchcock made a 3D film once, “Dial M for Murder,” but it wasn’t released in 3D. I first saw it in 2D, and was unimpressed. He’s a filmmaker who is famous for his extraordinary visual sensibility, but this film seemed stagey and boxed in, as though the whole of it were shot on a very small set. A few years ago I saw it in 3D and suddenly its artistry revealed itself — just how playful Hitchcock was with depth, and how much significance there was to where he placed objects onscreen. The film’s famous sequence, in which a shadowy figure attacks Grace Kelly and her hand flails out, at first in agony, as she is being strangled, and then reaching for a scissors to use as a weapon, becomes unbearably exciting.

So the art of 3D, as with all film art, depends on the artist, and there aren’t that many artists in popular filmmaking. But there is Martin Scorsese, who is responsible for “Hugo,” which opened last weekend to lukewarm audiences. And this is a pity, and one I hope to help remedy, because it’s the best film I have seen this year, and the year is almost over.

A few years back, when Scorsese was making “Gangs of New York,” George Lucas visited the set, which was sprawling, representing a mile of 18th century New York. Lucas was puzzled, informing Scorsese that all of this could have been created by a computer. I am not sure that would have been appropriate for the film, as it was the enormousness of the set that seemed to inspire the enormity of some of the performances, especially Daniel Day Lewis’s Bill the Butcher. But with “Hugo,” set in mid-20th century Paris, Scorsese has embraced the digital backlot, and seems liberated by it. The camera is set free in the film, and it flies about like some occult creature, sailing into the air high above Paris and then plunging through the glass-enclosed Montparnasse railroad station, and then into its walls, where an orphan named Hugo Cabret (Asa Butterfield) tends, in secret, to the station’s clocks.

There are two things I want to mention to begin with. The first is that Scorsese does not bother with realism in this film — the whole of it has the heightened colors and unwordliness of a children’s fantasy. Second, Scorsese uses 3D to represent Hugo as nearly entombed (at one point literally) in a mechanical, watchwork world of springs and gears. The Montparnasse clocks are large enough that he inhabits them, working on his own project, which is to repair a mechanical man who is likewise built of springs and gears. And sometimes he climbs to tallest clocktower in the building to look out on Paris, which he likewise sees as a vast machine. And when repairs need to be done, he does so by stealing parts from a toymaker in the station named Georges, played with unhidden heartbreak by Ben Kingsley.

Georges was a real man, and he really had a toy store in Montparnasse station. His last name was Melies, and, in the early days of film, he was the medium’s thaumaturge, best remembered for an adaptation of Jules Verne called “A Trip to the Moon.” He had been a literal magician, and adapted his stage magic tricks to the new medium. He had a great taste for artifice, and so his films look shot on a stage, with effects that are obviously stage properties or puppets or fireworks, but created with an almost baroquely detailed art nouveau sensibility that overwhelms and delights the eye. But Melies is a broken man in this film, believing his work to be destroyed, and it is up to Hugo to unlock his secret.

The film is unabashedly a love letter to Melies — some of the finest scenes recreate Melies’ glass-enclosed studio, where men in lobster costumes and women dressed like shooting stars bustle about as Melies shouts joyous commands at them. He was the first filmmaker to realize that, with film, we were only limited by our imaginations, as his was prodigious. But, in a broader sense, “Hugo” is a love letter to filmmaking in general, especially from the silent era, and Scorsese visually quotes from Harold Lloyd and Jean Renoire. Additionally, there is a brief sequence that offers a lively recounting of the early years of film, entirely through silent short clips, and they are irresistible.

There are a lot of themes in “Hugo,” all handled well, many quite moving, but all extend outward like spokes from the film’s central tragedy — that Melies was a man made by the creation of art, and unmade by its destruction, and cannot be made whole again until his art is restored to him. There may be no better use of 3D than in the film’s climax, which gives us scenes from Melies, newly and brilliantly converted into 3D, where they dazzle anew. Were such technology available to the filmmaker, who was relentlessly experimental, he no doubt would have made use of it, and were he alive to see these new sequences, he would be astonished by them. We’re thrust into his imagination in a way that would be impossible with 2D, and it’s like we’re watching a live stage show in which the impossible happens, which is, very nearly exactly, what Melies created.

‘Hugo’: Why Scorsese’s film is the best of the year