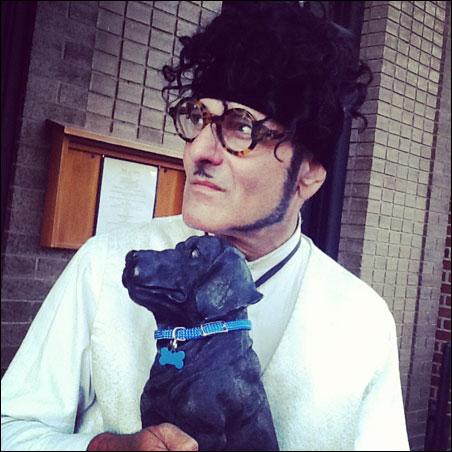 MinnPost photo by Max Sparber
Scott Seekins, one of the few to outlast Jante Law.

Last week I mentioned that Minnesota seems to have a regional variation of what the Australians call “tall poppy syndrome,” in which those who seem to be getting a little too big for their britches must be taken down a notch or two. This seemed puzzling to me, as we really don’t have that many Australians in Minnesota, and those we do have tend to be kangaroos, and I sincerely doubt we’re taking cultural cues from a marsupial. So where did it come from?

Doing some research, I discovered there is a Scandinavian variation called Jante Law. The phrase originates from a Danish author named Aksel Sandemose, who lived in Norway and wrote books in Norwegian, including one with the marvelous name “En flyktning krysser sitt spor,” which translates as “A Fugitive Crosses His Tracks.” The book was based on Sandemose’s childhood small town, which he redubbed Jante in the book, and in this town there are a series of rules. They are as follows:

There is a final, unspoken law, and it seem to be the stick that enforces the others: Don’t think that there aren’t a few things we know about you. Sandemose’s laws immediately became a sensation throughout Scandinavia, where it was felt they described a social phenomenon that, at its best, focused on the good of a community over any of its individual members, but at its worst repressed and minimized individual achievement.

I think we Minnesotans have absorbed Jante Law almost in entirety, and I think it explains a lot about us. There is a certain question this raises, which is why Minnesota, a state that is 38 percent German but only 26 percent Norwegian and Swedish, would be so keen to borrow from a repressive Scandivian tradition. It helps to know that apparently Germany has its own version of Jante Law, which no one has named, but there is quite a lot of online discussion about Germany having a similar spirit of rigorous conformity.

Dramatist Frederick Schiller phrased it in this way: “We are citizens of an age, as well as of a State; and if it is held to be unseemly, or even inadmissible, for a man to cut himself off from the customs and manners of the circle in which he lives, why should it be less of a duty, in the choice of his activity, to submit his decision to the needs and the taste of his century?” One presumes he then took a deep breath, because he had spoken so many words without a pause, and then flushed with embarrassment for having the temerity to express an opinion in public.

I don’t think the Minnesota version of Jante’s Law is a philosophy of rigorous conformity. We are a state of sometimes loopy nonconformity, and it is tolerated, and even celebrated, to a degree, although sometimes after a struggle. Let us keep in mind that, in 1969, when Garrison Keillor began playing popular music on “A Prairie Home Entertainment,” public radio’s predecessor to both “A Prairie Home Companion” and “The Morning Show,” disgruntled fans of the station tried to have the show canceled. And they continued in their efforts until the mid-’80s. It is all right to go quietly bonkers in Minnesota, so long as you don’t go public with it.

But I think Jante Law helps explain Minnesota’s chilly hostility to the idea of the local celebrity. Most Minnesota celebrities achieved their status by enjoying national success, so we had to grudgingly admit that, yes, they are stars. There are some exceptions to this, but they are qualified. There is artist Scott Seekins, whose sartorial eccentricity (all white in the summer, all black in the winter) has made him a popular local Halloween costume. But I recall, back in the ’80s, Seekins appearing in one of our newsweeklies’ annual “get out of town” issues, where they complained that he’s coming off as just another attention-seeker, and maybe it was time for him to move elsewhere. Seekins managed to outlast Jante Law, but it helps that people view him with the avuncular affection one feels toward an oblivious child.

People in sports and television news also enjoy a degree of local celebrity, but I don’t think they are an exception to Jante Law, but instead a modification of it. Sports is a bit unusual, in that everybody who is a fan secretly pretends they are part of the team, and so celebrating the team is really just an extension of celebrating themselves. It’s similar with local newspeople, who, after all, don’t talk about themselves (with the possible exception of Jason DeRusha), but instead talk about Minnesota. Minnesotans are willing to celebrate the individual if it’s a proxy for celebrating themselves.

But that’s it. If you’re attention-seeking in a more individualistic way, you’re going to get some bad reactions. When Diablo Cody first started becoming famous, she actively courted celebritydom, and the Minnesota reaction was swift and terrible — never mind that she was an Illinoisan whose tenure in the Twin Cities was less than half a decade. She always had had a bit of an attention-seeking personality, unlike, say, Josh Hartnett, who still shows up at local plays and hangs out at his old Minnesota haunts, trying very hard not to be too obtrusive, despite the fact that he is 6’2″ and one of the most handsome men on earth. There may have been legitimate criticism of “Juno,” but it was lost in a thrum of “don’t think you’re more important than us.” Every local story on Cody swiftly filled with vicious readers’ comments (and a few shrilly supportive comments from fans, who rightly felt that all this was a bit unfair). David Carr, who himself has long had a decidedly un-Minnesotan attraction to celebrity, wrote an unexpectedly defensive piece about her, suggesting that hostility toward Cody was just jealousy. It wasn’t jealousy. It was Jante Law.

The oddest effect of Jante Law is one that has local publicists constantly confounded, which is that it makes traditional publicity techniques useless. Most local arts organizations don’t do any self-promotion at all, except perhaps sending out Facebook invites; they don’t want to be seen as being too needy for attention. Those that do often find themselves faced with a bewildering contradiction: The more self-promotion they do, they less attention they receive. Indeed, local editors will sometimes spontaneously decide that a local artist or organization has gotten enough attention, and turn away stories about that artist or organization, regardless of whether it is a worthwhile story. This wasn’t always the case, mind you — there was a time when Minnesota publications paid well enough that a percentage of the editorial staff came from out-of-town, and believed in assigning stories on merit alone. But, with the collapse of local legacy media, our editors are increasingly young and local, and enforce Jante Law without even thinking about it.

In my opinion, this is a pity. The arts don’t work the way the rest of the world does. Behavior that is an anathema anywhere else is essential to the arts. For instance, democracy is generally a good thing, but is often disastrous in the arts, which generally benefits from having a single visionary who is, functionally, a fascist. The arts undeniably benefit from a whiff of the celebrity, and the impulse to get into the arts is often linked to an uncomfortably neurotic need for attention. Artists don’t make any money anyway; the least we can give them is the reward of being a local somebody. All they really want out of life are free drinks and groupies, and they work awfully hard, but they are going to be rebuffed here.

I doubt Josh Hartnett minds. There are some people who can’t stand the experience of being a celebrity, and welcome a place like Minnesota, where they can go to buy groceries in peace. But for the others, those who want a dash of fame to accompany their hard work, the best they can hope for is the following:

The only way to know if you’re famous in Minnesota is if everybody is trying very hard to ignore you.