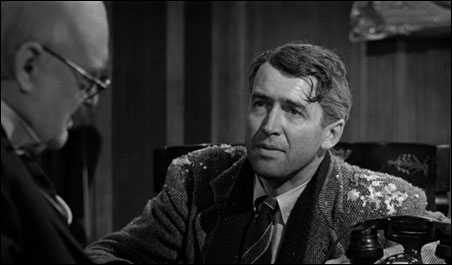 Photo courtesy of RKO Radio Pictures
Jimmy Stewart in ‘It’s a Wonderful Life’: A man with a breaking point.

I think it is fair to say that there is no film I have spent more time thinking about than “It’s a Wonderful Life.” It’s a film I find enormously affecting, and always have, and so will only watch it alone, as I don’t especially wish to be seen weeping — certainly not so copiously. There’s a line in the film that is guaranteed to start the waterworks: When Jimmy Stewart is rushing home at the film’s end, having returned from Pottersville, the noir vision of his hometown that would have existed without him. He pauses for a moment to reach into his coat pocket, where he had kept some flower petals his daughter, Zuzu, had given him, and which had disappeared in Pottersville. They have returned, and he cries out “Zuzu’s petals!” And that’s when the floodgates drop.

Of course, those familiar with Twin Cities musical history know there was an all-girl band called Zuzu’s Petals back in the ’90s. They will also know that the band’s guitarist and lead vocalist, Laurie Lindeen, went on to marry The Replacements’ Paul Westerberg. And those who know me know that if I ever have to develop a drag act, my name as a performer will be Zuzu Petals.

I don’t think my interest in the film is that it makes me emotional. A lot of films do that, and it’s part of the reason I like films. I see a lot of horror films, and am genuinely frightened by them, spending much of my time at the theater hiding behind my hat. (It’s an improvement; as a boy I would actually leave the room when a film became too frightening.) War films can quite literally make me nauseated with terror. A well-made romance will make me all gooshy, although this hasn’t happened in years, as I don’t believe them to be well-made anymore. But something by Lubitsch will make me fall in love with love, like a boy in the spring, strumming romantic tunes on a mandolin.

I’m susceptible, and “It’s a Wonderful Life” is a perfect machine of sentiment, more so that you would expect on first blush. After all, there is something about its omniscient voiceover, a dialogue between two angels, that seems impossibly hokey. One of the angels, Clarence (Henry Travers), eventually appears, and he is seemingly slow-witted and bumbling, like a character rescued from the frequently insipid comedies of the early years of Broadway. The film’s storyline could fit on a Hallmark card, telling of a sad man who contemplates suicide, but is shown the error of his ways when an angel shows him how the world was made better by his presence. Superficially, it has the quality of those earnest religious statues that you’ll see in church gift stores every so often and wonder who purchases. You know the sort: Praying hands engraved with the words “He is with you,” or figurines of Jesus consulting with a football quarterback.

But if the framing of the the story seems hokey, the story itself, about a miserable man named George Bailey, isn’t. Director Frank Capra was one of the greats, and his writing staff was superlative — “Wonderful Life” included “Thin Man” screenwriters Frances Goodrich and Albert Hackett, “A Place in the Sun” scribe Michael Wilson, and, believe it or not, Dorothy Parker. The film’s essential dramatic moment is Bailey’s attempted suicide, foiled by the angel, and the script has led up to it very carefully. On the surface, Bailey’s excuse for offing himself is to solve an economic crisis that might destroy his family — his death would provide them with insurance money. But we have reason to believe that even without that excuse, Bailey might have tried to do himself in anyway.

He’s a man of endlessly thwarted ambition. All he has ever wanted to do is escape his hometown of Bedford Falls to the big city, and his ambitions are repeatedly foiled by circumstance. The first few are out of his control — World War I, and then the Great Crash, which both conspire to push him into a job as a small-town bank manager. Bailey was meant for greater things, or, at least, more adventurous things — put him on a dance floor, he’ll jitterbug with the best of them, which is exactly the sort of thing that made Joan Crawford a star in Hollywood. He starts the film ambitious, fun, and young, but he enters his middle age helping immigrants get loans to build small houses on distant plots of land, his hopes for adventure thoroughly crushed.

Bailey is, of course, played by Jimmy Stewart, a Pennsylvania-born actor who was an avid accordionist, glee-club member, and former assistant to a professional magician. Stewart left the prospect of a promising career as a Princeton-trained architect to move to New York and then Hollywood. One suspects Stewart was well acquainted with Bailey’s conundrum, as he himself was once faced with the choice between a stolid but quotidian career and adventure — Bailey could have been Stewart, had he become an architect. Stewart was already a very fine actor, but when “Wonderful Life” was made, in 1946, Stewart had just returned from World War II. He had volunteered as a a combat pilot in the Army, flying missions in Nazi Germany.

Now, despite his genial reputation, before the war Stewart was an actor who could play a role on the edge of madness (you can see a sample of this in 1936’s “After the Thin Man”). After his military service, this wildness seemed nearer the surface. Hitchcock used it very well, playing up the peeping Tom quality of his character’s voyeurism in “Rear Window” and vividly portraying sexual obsession in “Vertigo,” a film in which Stewart literally goes mad.

There is some of this in “It’s a Wonderful Life.” Bailey’s disappointments are reserved, but ever-roiling, and the final straw is his budding romance with neighbor Mary Hatch (Donna Reed), whom he has developed an enormous affection for, but also knows will be just another chain binding him to Bedford Falls. The scenes in which he both resists her and succumbs to her are exceptional, especially as Stewart’s conflict sometimes emerges as cruelty to Hatch. He’s not a lunatic, but Stewart’s George Bailey is a man with a breaking point, and it’s one that’s not too hard to get to.

And so the film watches him break, and there’s nothing about this that feels forced or hokey. We actually don’t spend that much time with Clarence the angel — Bailey’s tour of Pottersville is a whirlwind. Most of it is spent in Nick’s bar, which is now crowded with grim looking men getting sloshed on cheap liquor as the bar owner abuses them. Eventually, Stewart discovers Hatch has turned into a timid spinster, and decides life is better with him alive than with him dead. But these scenes in Pottersville are terrifically important, and I think I have realized why.

This is the moment when Bailey gets a taste of the big city. And it is appealing — more than one critic has pointed out that Pottersville, with its collection of neon-lit dance joints and watering holes, seems like a lot more fun than Bedford Falls. But once you enter these places, the people inside don’t look like they are having fun. At best they are guarded and taciturn, and at worst they are mean, and their single goal is to obliterate their misery with alcohol as quickly as possible; as Nick says, “We serve hard drinks in here for men who want to get drunk fast, and we don’t need any characters around to give the joint ‘atmosphere.’ “

Compare this to the Charleston contest in Bedford Falls, which is full of character and atmosphere, and actually performed in a gym that opens to reveal a swimming pool underneath, which it does mid-dance. Bailey’s the sort of man who would rather be at the Bedford Falls dance than the Pottersville bar; he’s a better match for Bedford Falls, in which he can be a good, honorable man and still have adventures, than Pottersville, where he is a nobody and an irritant. Had he left for the big city when he was a boy, as he wanted, he might have discovered this and returned to Bedford Falls of his own accord. Some do well in a big city; Bailey does well in his hometown, which, thanks to the influence of the bank he runs, has become a reflection of him — compassionate, fun-loving, and unexpectedly ambitious.

I suspect I am the sort of person who would prefer to live in Pottersville anyway, bleak though it may be. But, then, I’m not preparing to fling myself off any bridges on Christmas Eve, I have never helped a man build his own house, and I have no Zuzu of my own. I’ll take my chances with the drunks and the dancing girls, which may be my station in life, if Clarence is watching me and keeping score. But every Christmas, I like to be reminded that there are men like George Bailey, whose life is at once worse and better than mine, and who would also like to be with me among the drunks and the dancing girls, but has better things to do.

An obsession with ‘It’s a Wonderful Life’