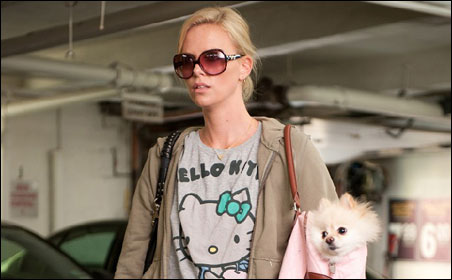 There’s a fair amount of speculation about how much autobiography is in “Young Adult,” the newest film from screenwriter Diablo Cody and director Jason Reitman. Of course, one of the advantages of being in Minnesota, where Cody lived for four years and where she sets her films, is that there are an awful lot of people here who knew her, and know her. They tell me that it’s impossible to see Mavis Gary, the character Charlize Theron plays, as anything other than Cody writing about herself as though she had absolutely no filter to prevent every neurotic impulse she has from becoming action.

In some ways, this is unsurprising. Cody has admitted that Juno MacGuff, the main character from her and Reitman’s previous collaboration, is an idealized version of herself — I heard Cody say exactly this at the Walker Art Center when her film was screened there. So, in a lot of ways, this is the photo negative of that character. Rather than cast all her hopes and aspirations for herself on the screen, Cody seems to have cast all of her fears about herself.

It’s an interesting approach — more interesting, I think, than “Juno.” Were it not for the enormous charms of actress Ellen Page, who played Juno, and the genuine cleverness of much of her dialogue, her character would have been that most loathed of characters to appear in fiction, the Mary Sue. Particularly in fan fiction, this is a term for a character who is obviously an idealized version of the author, and is so pernicious that there are online tests to determine if a character is a Mary Sue or not.

In fact, here’s one. If you like, you can run through it and see how much of it applies to Juno, subtracting, of course, anything having to do with magic, as Juno was a pregnant teenage girl and not an elf. But characters are less interesting when they are idealized and more interesting when they are misbehaving, and so I find “Young Adult” to be a considerably more mature film than “Juno.” There is almost none of the precociously showy dialogue that was “Juno’s” signature, and which split audiences. “Juno” had a twee sensibility and sprightly pacing. “Young Adult” is paced for details, many of which are revealed slowly and without dialogue: the way Mavis Gary casually mistreats her tiny dog, her disaster of an apartment, her incessant drinking.

Gary gets it into her head one day to return to the small Minnesota town of her childhood and steal her high-school sweetheart, who is now married with a child, and she rolls into town like a natural disaster. She has a chronic inability to pay attention to the sorts of things that everybody else thinks is important and a terrible ability to externalize her own desires. Whatever she wants, she decides this is what other people want for her, and that it is what is best for them. This is the sort of unbalanced worldview that could play out as comedy, and “Young Adult” has a few marvelous one-liners, but it is a work of irony, and irony is often more stinging than enjoyable. Mavis Gary is a thoroughly unlikable character, and her misbehavior is often impossible to fathom, until she has an explosive meltodown at the film’s climax that locates a source for her misbehavior, and it comes from genuine, never-addressed heartbreak.

The most awful people often have heartbreak in their life. I know the idea of neurosis doesn’t have much currency in the psychiatric world anymore, but, in my own life, I find it a useful concept. It helps me to know that many people go through life with unhealed wounds that have made them tender in unexpected places, and, when they feel threatened in the same way that caused the injury, they often respond with unthinking defensiveness. This does not excuse the behavior, but it does make it human, and comprehensible.

Thankfully, the film has given Mavis Gary a friend, in the person of Patton Oswalt, an aging high-school misfit with decidedly nerdy tastes and a destroyed lower body, the result of a vicious attack against him when he was a teen, perpetrated by high-school jocks who thought he was gay. He’s caustic, bitter, and genuinely broken, and he becomes Gary’s unwelcome Jiminy Cricket, tolerated by her in part because he makes his own bourbon and in part because he dotes on her. For some reason — perhaps because she finds him thoroughly unthreatening — Gary feels comfortable exposing the whole of her miserable self to him, that she’s just as broken as he is, and in some of the same ways.

The two performances here, Theron’s and Oswalt’s, are superlative, alternating between an unforced chumminess to genuine viciousness. Many critics have suggested that Oswalt’s character might have been somehow good for Theron’s had he only come into her life at an earlier time, because he’s a voice of unvarnished truth. But I don’t think this — she ignores everything he has to say, and, when he’s becomes too forceful, cuts him back to size with some of the cruelest dialogue ever written. She uses him as an unwilling enabler, which she can do because he’s likely to forgive whatever she does. But when Mavis Gary listens to advice, it is only the advice that supports her, as demonstrated in a marvelously ambivalent scene at the end of the film with Oswalt’s sister.

I am not clear what responses to this film will be. It’s being marketed as a comedy, and it’s not very like a comedy at all, but instead like an occasionally wry tragedy. And there is a difference between independent film, which tends to be popular filmmaking made by independent companies, and art films, which tend to be films made for niche audiences, and can be alienating to everybody else. “Juno” was an indie comedy. “Young Adult” is a bitterly ironic art film. It is, I think, the sort of film that Cody and Reitman should be doing, and will continue to mature at doing. But I am that niche — I like films with unlikable leads and genuinely ambiguous conclusions. I’ll be curious to see how many audience members share my tastes.

The opposite of ‘Juno’: ‘Young Adult’