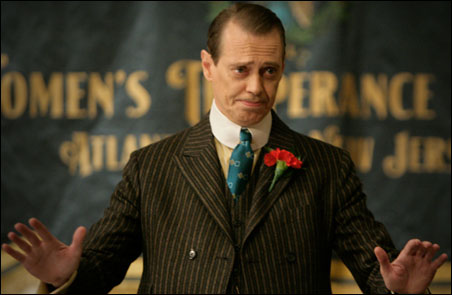 It may not be a very Christmas-y thing to do, but I have been pondering “Boardwalk Empire” lately, which just completed its second season on HBO. There is a lot that I like about the show, and one specific complaint, and perhaps the best way to approach this is just to enumerate the show’s myriad pleasures and then briefly discuss its lone failing. So here they are, the show’s pleasures:

1. Steve Buscemi’s lead performance. Buscemi has long been a reliably great character performer, and he boasts one of the most enviable actor’s résumés in Hollywood. But he’s not often given a chance at carrying a show, and when he has it has usually been in projects that are self-consciously quirky. And that’s understandable, as he’s a quirky character, with a worried, suspicious face and a high tenor voice that, especially early in his career, tended to keen upward into whining. His roles have often tended to be the equivalent of walk-ons, with Buscemi appearing in just one or two scenes to indicate that a film has taken an oddball turn — it’s how the Coen brothers have mostly used him, except in “Fargo.” Take “Barton Fink” as an example. The title character is a New York playwright who has moved to Los Angeles to work in pictures. The Coens’ Hollywood is an alien world, manifested most menacingly by the Hotel Earle, a deco monstrosity in which the wallpaper is literally sweating off the walls. The first person he meets in the building is its bellboy, Chet, who emerges from a hatch in the ground like an imp rising up from the underworld, who then recites an extended list of the hotel’s services in a brisk, disinterested monotone. This is the role they gave to Buscemi, and it’s his only appearance in the film.

But Buscemi can do lovely work with more fleshed out characters, as he demonstrated in one of his first film roles in “Parting Glances,” in which he played a gay man living with AIDS with a high-speed, almost New Wave cool, and in “Ghost World,” in which he played an Orange County sad sack with a huge collection of vintage 78s, an existential disgust for humanity, and an unrequited crush on a teenage girl who befriended him mostly as a prank. He’s never less than an appealing presence, and “Boardwalk Empire” makes full use of this fact. As Nucky Thompson, the boss and primary bootlegger of 1920s’ Atlantic City, he’s a gregarious, avuncular fellow with a taste for big parties, grand gestures, and disarming displays of vanity. He’s an appealing schemer whose primary interactions are with his German valet, whom he comically abuses. He’s also a fiercely intelligent and ruthless man, at ease with murder, and comfortable lying about the fact. He uses everyone around him, and gives them just enough to keep them quiet, if not happy — a parsimoniousness that is the source of most of the show’s resentments and eventual conflicts. It’s a terrific portrait of what we now call sociopathology, and Buscemi brings out one of the defining features of the skilled sociopath — that they tend to be pretty charming.

2. The show’s portrait of Prohibition being a playground for lost men. Both the show’s bootleggers and Prohibition agents are people pushed to America’s margins, consisting mostly of immigrants and either ethnic or racial minorities. A large number of them are veterans of World War I, and are both physically and psychically scarred by the event, treating disagreements like trench warfare and answering every insult with blood. Thompson is the pin that connects the world of the privileged to the world of the disenfranchised, and, were it not for the fact that the rich like booze and need the poor to get it for them, the two groups would barely connect with each other. Much of the show simmers with class resentment, and other resentments — particularly racial and ethnic — do more than simmer. There are a few scenes in the two seasons that show the program’s more unscrupulous characters — particularly Thompson — taking advantage of these tensions for political gain. In fact, the KKK exists in the show’s Atlantic City, but mostly as a bully tool for the corrupt and powerful. This is a show in which social fractures don’t simply exist, but exist for a purpose, and that purpose is to benefit the powerful.

3. The world of “Boardwalk Empire.” The Atlantic City of the show is a Victorian vacation town (the boardwalk was built in 1870s) coming into modernity, and, by virtue of its function as an entertainment capital, is a little ahead of the curve. And so it is filled with all sorts of oddball Victorian entertainments, such as a boxing match made up of dwarfs, as well as offering the latest technological innovations, including boxing matches on wireless radio, a full cinema, and, of course, bootleg liquor, which starts out plentiful in the city when the rest of America goes simultaneously dry. The show has been slow but deliberate in showing the city’s march toward the Roaring 20s — all the female characters started the show with Gibson Girl haircuts and Edwardian gowns, but one by one, starting with the showgirls, they have swapped them out for Lulu bobs and Ertre-style dresses. The younger, up-and-coming gangsters, especially Al Capone (played as an unexpectedly appealing character by Stephen Graham) have started to favor fedoras and suits with slightly padded shoulders. Nucky Thompson drives a Rolls Royce, but the rest drive Packards, the signature car of the gangster, and in just the past few episodes the Tommy gun made its first appearance. The show is inching toward the Roaring 20s, and it has been fun to watch the world of the show transform, bit by bit.

But, as I said, I have a criticism of the show, and it is as follows: For the most part, the female characters are not as well-written as the male characters. This is not as catastrophic here as it is on other shows, but, for the most part, Hollywood still does not know how to write for women, and this is especially glaring in a show like “Boardwalk Empire,” which is otherwise so excellent. It’s not consistent on the show, as the character of Angela Darmody, played by Aleksa Palladino, is a solid piece of writing: She’s the long-suffering wife of an upstart gangster, which could be a pretty limited role. But she lives just on the fringes of a creative community, which she tries to participate in, first as a painter with no great ability, but later as a sexual experimenter. “Boardwalk Empire” isn’t “Mad Men,” which has a large female writing staff, and has exhaustively detailed how limited a woman’s opportunities are in a world in which sexism is unceasingly pervasive, but Angela Darmody gives a hint at that.

But then there is her mother-in-law, Gillian Darmody, played by the typically excellent Gretchen Mol. The writers have tried to provide this character with depth, but have mostly failed, and, as a result, Gillian is almost cartoonishly villainous, a sort of scheming, heartless, needy, incestuous Lady Macbeth. The lone motivation for her misbehavior is that she was repeatedly sexually assaulted when younger (which, to the show’s credit, it treats as horrific), but the link between her past traumas and current misbehavior has not been as finely detailed as with other characters. In fact, it hasn’t been detailed at all; it’s as though the writers just decided that if a woman was abused in the past, that’s the only explanation that is required for her to be a monster in the present.

The actress who gets the worst of it, though, is Kelly Macdonald as Margaret Schroeder, Nucky Thompson’s girlfriend. Macdonald is a fine, expressive, intelligent actress, but the writers have given her a character who is positively schizophrenic. She starts the show as a bit of a political animal, joining a Temperance association in part to push for woman’s suffrage. She’s smart enough to hold her own in conversation with professional politicians, and, once she throws her lot in with Thompson, to actively support his scheming. She was always a bit ambivalent about this, but there was a moment when she seemed to have made a decision to throw her lot in with Nucky’s, whatever the results. This was encouraging, as women were yet another disempowered group at the time the show was set, and it badly needs to show how alcohol was at the center of the first stirrings of feminism. Both temperance and intemperence changed things for women, the latter bringing about the flapper, which was the first really modern role for women. It would have been nice to see Nucky and the widow Schroeder as a gangland power couple, with Schroeder really enjoying her newfound, alcohol-bought power.

But no. Instead, in the second season, the writer’s seemed to lose track of Schroeder. She drifted from being the intelligent and forceful character of the first season to being a guilt-ridden, superstitious scold the second season. It’s as though the writers couldn’t conceive of having a show without the most clichéd of female dramatic characters, the spoilsport, and so saddled Schroeder with that job, even though it suited her poorly. And what a waste. Kelly Macdonald is a lively, electric actress with a long history of playing adventurous roles, starting with “Trainspotting,” in which she seduced Ewan McGregor.

And yet, in “Boardwalk Empire,” everybody gets to have fun in the Roaring 20s except the Widow Schroeder.

The pleasures — and failings — of ‘Boardwalk Empire’