I have a funny relationship with Christmas, and it’s one that makes my parents uncomfortable.

Specifically, I love the holiday. It’s a peculiar love affair, seeing as I was raised by Jews and am an atheist, but the heart wants what it wants. I have been decorating for the holiday since I was in my early 20s, when I bought an inflatable wreath to put on the door of my Los Angeles apartment, but the wreath was promptly stolen. I have obsessed over the movie “It’s a Wonderful Life” for decades, which, while I don’t believe it to be the best film ever made, I nonetheless think is an awesomely complicated one, and unsettlingly bleak. I watch the Pee Wee Herman  Christmas special every year, in which the gray-suited manchild chats with Little Richard and abuses Frankie Avalon and Annette Funicello while Grace Jones sings “The Little Drummer Boy.”

I think I’m supposed to be part of the war on Christmas. I fit the profile: liberal, secular, atheist. I never could manage it, as I am too busy wrapping gifts, setting up lights, and preparing my tiny Christmas tree. And, oh my God, I live for nog. Alcoholic or otherwise, when this time of the year comes around, I drink it in gallons.

I do understand that this is a religious holiday for some. But, for others, it’s a secular holiday, with traditions borrowed from ancient paganism, and that’s the holiday I celebrate. I mean, I do love the Jewish Christmas, when you get Chinese food and go to see a movie, which has long-functioned as a sort of mass reunion for the Jewish community — in line to a Vin Diesel film, you’ll see people you haven’t seen since your Bar Mitzvah. But I have a feeling a lot of those folks also secretly go home to a house filled with Christmas lights and red and green decorations. Sure, we have Hanukkah, a holiday that we have, I think sarcastically, dubbed the Festival of Lights, despite the fact that our eight candles cannot compete with the neighbor’s synchronized Christmas light musical extravaganza.

But Hanukkah is a sort of Johnny-come-lately holiday. If we exchange gifts on it, it is in imitation of Christmas, and why imitate when you can enjoy the real thing? Only busybodies fret when Jews participate in Halloween, which is also Christian, or Mardi Gras, which is specifically Catholic. I say give us Christmas, too. After all, we wrote the best Christmas songs, including “The Christmas Song” (“Chestnuts Roasting on an Open Fire”), written by Melvin Howard Toma, better-known as Mel Tormé, and “Rudolph the Red Nosed Reindeer,” written by Johnny Marks, also responsible for “A Holly Jolly Christmas.” And, of course, “White Christmas,” written by Israel Isidore Baline, best known to the world as Irving Berlin.

Actually, I think I love Christmas songs best of all. I’ll listen to them year-round, whenever I need a dose of holiday cheer, which I find is often especially true in June, for some reason. I collect Christmas songs, and I love how strangely off-balance so many of them are, as though composed by somebody well into their fifth glass of Christmas sherry. Here are a few of my favorites:

First, there’s Juan Garcia Esquivel, the cherub-faced, bespectacled Mexican musical prodigy whose voluptuous, technologically sophisticated musical arrangements have made him a hipster saint to lounge lizards everywhere. He tackled the season in his CD “Merry Xmas from the Space-Age Bachelor Pad” (Bar/None). He offers a monotone intro over a version of “Jingle Bells” in which the lyrics have been replaced by “Zoo zoo dweet, do be wow” and sounds like dialogue from the Playboy mansion. “The mistletoe is right over…,” he begins, then interrupts himself, “Ah! It seems to be occupied right now.” 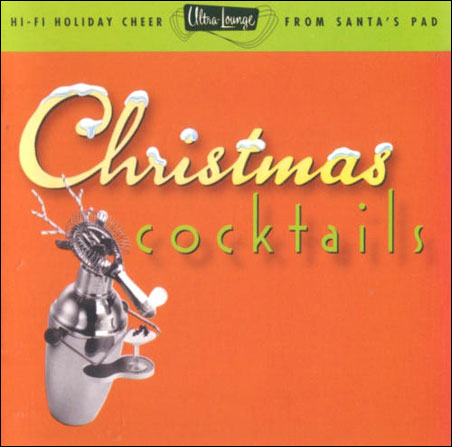 This same bachelor joie de vivre exhibits itself on Capitol’s “Ultra Lounge: Christmas Cocktails,” part of its massive Ultra Lounge series, which also features some of history’s campiest singers: Dean Martin drawls “I’ve Got My Love To Keep Me Warm” while Nancy Wilson implores “What Are You Doing New Year’s Eve,” both sounding suitably besotted. The folks down at Rhino Records must have been in a similarly intoxicated spirit when they compiled “Hipsters’ Holiday,” a collection of 18 hysterical jazz carols, many of which recast Santa as a sort of zoot-suited Harlem hepcat. “Dig That Crazy Santa Claus!” Oscar McLollie and His Honey Jumpers cry out, while Pearl Bailey pleads with Saint Nick for a “Five Pound Box of Money.”

For those in a quieter mood, there is Dancing Cat Record’s Hawaiian Slack Key Christmas, consisting primarily of traditional carols performed by modern slack key guitar masters such as Keola Beamer (who tackles “Away in a Manger”) and Ozzie Kotani (with an exquisite version of “The First Noel”). These performances are so mellow that they call to mind the New Age music that drove everyone into cheerful slumbers in the ’80s, so it is no surprise to discover that the CD is produced by George Winston. There is a risk of drifting off to sleep listening to this, but it will be a happy sleep, with dreams of either sugar plums or seared ahi with wasabi beurre blanc sauce dancing through your head.

Santa Done Got Hip: music for the holidays