Have we reached a point when the American Christmas has stopped absorbing new traditions? That seems such a shame to me, as the holiday is, as it stands, already such a delightful gumbo of various international practices. We get the Christmas tree from 15th century Livonia, the wreath from Germany, and kissing under the mistletoe from the Scandinavians. Jolly old St. Nick himself is Greek, although he was a bishop in Turkey, which might be a bit of a surprise for those who associate him with the North Pole and don’t imagine him snacking on baklava.

There are so many more traditions out there, and, if America has never really managed to be the social melting pot it once promised to be, it sometimes manages to be a cultural mash-up, creating a sort of pidgin culture by combining barely understood practices from our various immigrant peoples. We’re a bit like one of those alien species Captain Kirk and his crew occasionally ran into on the original “Star Trek,” who have imagined an entire society based on a single book they found drifting in space, and I like it that way.

So let me offer a few suggestions for Christmas traditions that have not made it into the American mainstream just yet. A holiday is always enriched with the addition of a new custom, and here are a few of my favorites: 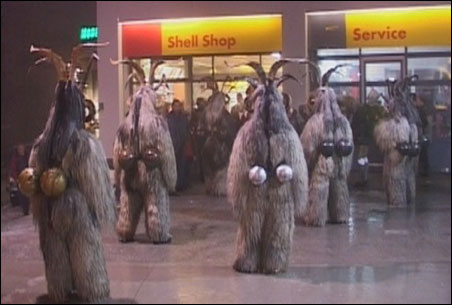 Krampuses: It’s not enough to reward the good; one must punish the wicked. We used to do that by putting lumps of coal in people’s Christmas stockings, but this practice has fallen by the wayside, probably because it makes Santa look like a bit of a jerk.

Alpine countries long ago solved that conundrum. The good get St. Nick. The bad get krampuses. These costumed creatures tend to resembled a bigfoot crossed with a demon, and they stamp through the snow from village to village, jingle bells tied around their matted fur, warning of their coming. And woe be to anybody who meets a krampus — they don’t really keep a list, the way Santa does, but tend to just wildly abuse anybody they come across (as demonstrated in Cameron Jamie’s documentary “Kranky Klaus,” in which krampuses toss passers-by into the snow while crying children wait their coming.) However, krampuses  are capable of recognizing an especially naughty child, whom they immediate seize and stuff in a sack, presumably to eat later.

Mad though this tradition might sound, it has started to find a following in the United States, including parades of krampuses in Portland and Philadelphia. Let me appeal to Minnesota’s insecurity about not being as cool as other cities by saying that once again we find ourselves trailing Portland, and how did we let this happen? They have a better bike culture, hipper stores, better cocktails, and now krampuses? Time to get on it, Minnesota.

Caganers: I am not going to translate the literal meaning of this Catalonian word, but will instead describe the knickknack it names: Caganers are small figurines of people squatting down to void their bowels, traditionally put in the nativity scene.

I know — what the heck? Further, the figurine has evolved since its original conception, when it was a peasant man. Caganers nowadays tend to be celebrities and politicians, which means that some manger scenes in Catalan this year will have the baby Jesus looking out to see President Obama taking a toilet break just feet away.

So why? Nobody knows, but the tradition is tolerated by the Catholic Church, and variations have appeared in France, Naples, and Portugal. People’s best guess as to the reason for this tradition is that it is useful to contrast the sacred with the profane, although others think the tradition really took off because people thought it was funny. In fact, it’s not the only poop-based tradition in the Catalonian Christmas — they also have something called Tió de Nadal, the Christmas log, which is beaten on Christmas Eve to force it to defecate candies and nuts. Lest people think I am playing up the scatological qualities of this tradition, when the log is beaten, the beating is traditionally accompanied by a song that I also will not translate, but literally tells the log that if it does not evacuate its bowels, it will continue to get beaten.

Mari Lwyd: We seem to be losing the tradition of carolers. Oh, sure, store owners will hire small groups of singers, dress them in Victorian garb, and have them wander around malls to irritate shoppers. But they used to show up at your door on Christmas and sing away until you paid them off to leave, a tradition called wassailing that may predate Christianity, and carried with it an implied threat. In England, unless you gave the wassailers their cider and figgy pudding, they were likely to vandalize your house.

I think it might be possible to bring back proper caroling by returning some of the menace to it. I can’t recommend property damage, so I will instead suggest goosing the whole event with the addition of a horse skull on a stick; what could be more fun on Christmas eve than to open your door and see a deceased horse demanding gifts?

The tradition is called Mari Lwyd and originates in Wales, and was accompanied by a whole host of frightening companions, including Punch and Judy and a boy with a whip, all of whom would create some degree of chaos. The horse’s skull, which could be made of wood, was often spring-loaded, so it could snap at passers-by, and would sometimes demand that people engage in long contests that involved creating spontaneous rhymes in what can only be seen as a predecessor to freestyle rapping. One expects that you wouldn’t need to do any of this nowadays. Christmas celebrants, enjoying their Caganers and Christmas log, are likely to respond quickly and with terror to an interruption by a horse skull. One suspects they’ll just toss figgy pudding at you without much prompting, and then it’s on to the next house.