Usually I don’t put myself in the company of children, who I view with the same suspicion that I view drunk adults. Certainly they are sociable and occasionally entertaining, but there is a very great risk they might start crying or fighting each other with no warning at all. And they seem incapable of knowing when you’re sick of them and it’s best if they leave you alone. 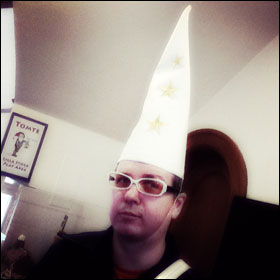 MinnPost photo by Max Sparber
Max as a star boy

But this past Saturday, a tompte was scheduled to appear at the American Swedish Institute, and you don’t often get the chance to see this mythical creature. In fact, we were were warned we might not see it that. Tomtes, which look like little old men, are shy creatures, and have to be fooled into appearing.

What are they? Well, perhaps it would be easiest to start with a description of their appearance: They are bearded and dress like a Scandinavian farmer, except in Denmark, where they are beardless and wear red and grey wool clothes and a fairly shapeless red cap. They sort of malinger around people’s houses and farms, hiding themselves during the day and, out of a peculiar spirit of generosity, doing little chores at night. The Norwegians think the tomtes have four fingers, and some people in Scandinavia think tomtes have glowing eyes, or, horrifyingly, just one eye. But they are rarely seen, so this is mostly conjecture. Also, tomtes may be poisonous.

And they deliver gifts, or don’t. The tomte sort of supplanted an earlier Christmas tradition in Scandinavia, the Yule Goat, which, like the tomte, was a tradition that varied from place to place. He wasn’t precisely a welcome figure in Finland, where, instead of giving gifts, he demanded them. Scandinavians believed the goat watched them, invisibly, to make sure they were preparing for Christmas properly, because Christmas isn’t a hard enough holiday, and what is really needed is an invisible goat watching you and judging you silently. This tradition is still around, by the way — the goat is a Christmas ornament made out of wood, and neighbors will try to sneak them into each others’ houses, just to remind their neighbors that they are being watched, and what could be more neighborly? Sometimes Father Christmas rides the yule goat when delivering presents, coming from his home in the mountains of Korvatunturi in Lapland, Finland, where presumably he spends the rest of the year practicing the tango, which inexplicably is tremendously popular in Finland.

But we’ve gotten distracted from the subject of tomtes. As I said, they have to be fooled into appearing, and the American Swedish Institute has a tradition of doing this by setting out rice pudding, lowering the lights, and singing a song about a tompte, led by a man with an accordion. The song goes like this:

Midnight’s nearing, not a voice is sounding
Nothing’s sounding.
Yet somewhere there is a quiet pounding
Quiet pounding.

We sang this over and over again, and then, in the distance, there was the jangling of keys, and then a pounding on one of the walls. Eventually, a diminutive figure crept through the crowd and began to eat the rice pudding with evident pleasure. 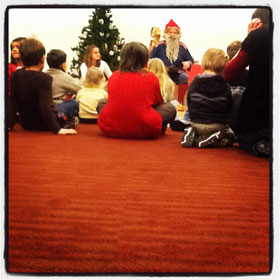 The lights came up. It was a tomte, and apparently one from a mixed family, as he had the garb of a Norwegian, but the beard of a non-Norwegian. Thankfully, he had two eyes. I am not sure if he was poisonous or not, as he didn’t bite anybody. Instead, he looked resigned, and sat down to tell the assembled children a story. He told of two boys who went out into the woods one winter, and nearly froze to death, but were saved by tomtes, who then gave them the tools to become successful tailors.

Afterward, the tomte opened the floor to questions. One child raised his hand. “How do you go to the bathroom?” the child asked. The tomte was confused by this question. “About the same as you, I suspect,” he finally answered. Another child raised his hand. “How do you get out of your clothes?” The tomte, realizing he was in a room full of the equivalent of a group of drunks, tried to be accommodating. “It takes a while,” he said. “I have a lot of buttons.” 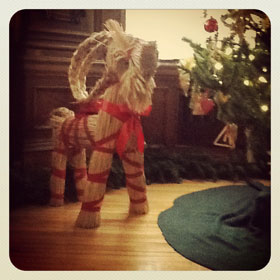 There was a Yule Goat by the tree, by the way. He said nothing, but I know he was judging us.

There are, by the way, an awful lot of Scandinavian Christmas events ahead at the museum, which has recently been extensively remodeled and is in the process of a massive expansion. Each room in the museum has been set up to resemble a different Scandinavian Christmas tradition — the Danish room, as an example, is all done in Danish modernism, including a Christmas tree that’s an abstract shape made of plain wood with simplified, space-age ornaments hanging off it. There is quite a lot of music in the building, and movies, including “The Lutefisk Wars,” a film about feuding Norwegian mafia families, and “Pippi Longstocking,” a film about a budding child anarchist who would later grow up to be Lisbeth Salander, the star of Stieg Larsson’s crime books, if I understand things right.

There will also be a fair amount of crafts, including making things with birch bark, and several celebrations of Saint Lucia, patron saint of the blind, who for some reason has been adopted by Scandinavian Lutherans, who have a feast day in her honor in Dec. 13. The day has a procession, led by a girl wearing a crown of candles and assisted by boys with star-spangled conical hats, call star boys, which sound like something David Bowie might have come up with; there is a Saint Lucia procession at the museum, but it is members-only, alas. Still, there are plenty more events, all listed on the museum’s website. There’s also rumors of more tomtes, so if you’ve ever wondered where they take baths, or how they wash their hands, this is your chance to find out.