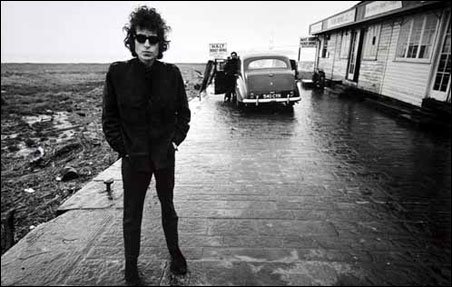 It’s apparently old folkie week on Max About Town. Yesterday I wrote about Koerner, Ray, and Glover, and today I feel compelled to write about Bob Dylan. Tonight, the Parkway is screening D.A. Pennebaker’s 1967 film about the singer, “Don’t Look Back.” This was filmed while Dylan was on his 1965 tour of England, a tour that can, at best, be called troubled. English audiences were surly, the British press declared him an anarchist, and his relationship with Joan Baez was on the skids (the film functionally captures their breakup). Despite this, or because of it, the film also captures Dylan at the height of an odd, squirrelly, punky coolness, smirking from being sunglasses and an anvil wedge of hair, baiting the press for their squareness and launching into impromptu hotel-room jam sessions.

I wrote yesterday about how culture moves from the sketchy fringes of mainstream society to its museums, and this film documents the start of that troubled transition for Dylan. He had already been showered with plaudits, but it was mostly for popular covers of his songs by other songwriters. Now Dylan himself had seized the limelight, and he wasn’t the moralizing, anthemic voice of a new generation that people expected. Instead, he was an electric, sometimes hostile oddball, and his oblique songs seemed to have coded in them a songwriter who viewed the world with a sardonic, sometimes vicious satiric sensibility. Dylan is surprised to hear himself described as an anarchist, but a bit delighted as well. Writing of the movie at the time, the New York Times called “Don’t Look Back” a step toward Dylan’s canonization, and wrote that “It will be a good joke on us all if, in fifty years or so, Dylan is regarded as a significant figure in English poetry.”

It was a good joke.

Another good joke: Television commercials, one of the most debased forms of advertising, are seen as an art in England. Were we to take American commercials and try to curate a museum showcase for them, we’d spend days picking through short semi-comic scenes of bewildered men failing at simple household chores, or slovenly man-children ogling scantily dressed women, or middle-aged women beaming with joy as they discuss how yogurt keeps them regular. But, for some reason, British television has always prided itself on subversion, and so their commercials are sometimes 30-second expressions of unexpected, crackling wit.

The Walker Art Center has long made a habit of screening award-winners from British television advertising, and so starting Friday they are offering this year’s British Arrow Awards. There’s a trailer for it online that offers a few samples of what the evening will offer, including what seems to be a popcorn commercial that suddenly turns grim as a little girl chokes on a kernel and a commercial for Puma in which what seems like an especially tough group of football hooligans offers up a heartfelt rendition of Savage Garden’s “Truly, Madly, Deeply.”

I am not sure what to say about singer and author Kinky Friedman, who appears at the 400 Bar on Saturday, except it will be a real test of society’s ability to neuter it’s rebels if Friedman winds up a museum piece. He’s one-half social satirist and one-half reactionary good ol’ boy, and one can never tell which half will be on hand, and which half should be taken seriously.

Friedman is a Chicago-born, Texas-raised, Austin-educated former Peace Corps volunteer who got his nickname from fellow cowboy satirist Chinga Chavin, a singer most famous for an NSFW song mocking Merle Haggard’s “Okie From Muskogee,” a reactionary tune about hippie punching. Friedman seems to have followed Chavin’s lead, occasionally embodying the tough-talking, cigar-chomping, bar fighting, hooting and hollering character that Chavin lampooned. But Friedman subverts this persona — one of his best-known songs is (WILDLY NOT SAFE FOR WORK) “They Ain’t Making Jews Like Jesus Anymore,” in which the song’s narrator assaults a racist in a bar.

It’s also worth noting that Friedman is a successful author of detective novels. Although it probably also should be noted that these tend to have titles like “Elvis, Jesus and Coca-Cola” and “The Love Song of J. Edgar Hoover,” and Friedman often makes himself the main character in his novels, which involve him solving crimes. It’s not likely that, in 50 years, Friedman will be seen as a significant figure in American letters, and good for him. This world needs a few people who can’t be tamed.