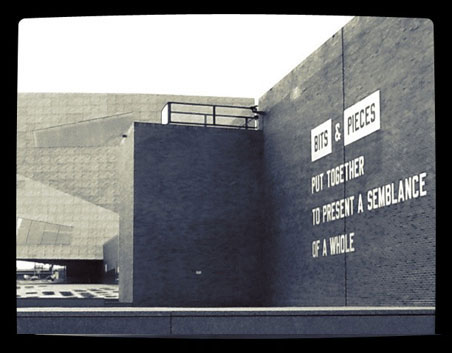 MinnPost photo by Max Sparber
Minnesota, a great place to make art, unless you want to make a living making art.

It probably should be noted, at some point, in some local media, that it is pretty much impossible to directly make a living making art in the Twin Cities. There are arts-related jobs that will provide somebody with a steady paycheck — although, generally, not a great one.

One can go into arts administration; there’s some money there. One might become a professional grant writer, which I am told can bring in a decent paycheck now and again. One can become an arts educator, which may put somebody into the middle class, depending on the institution. If you’re in the fine arts, you might go into commercial art, and fill your bank account with checks from ad agencies. If you’re an actor, well, you can always try to find work doing singing telegrams and the like. You might become a critic, like me, and make a scurrilous income by having an opinion, sometimes ill-informed, about the arts.

This is not to denigrate any of these jobs, except, of course, critic. But it should be noted that few people get into the arts hoping to dress as a rabbit outside a mall store. But I know almost every actor who has any sort of established résumé in this town, and will guess that the number who make their living exclusively from theater and film or television projects is, at most, a handful. I know a lot of artists, and few of them make more than a few thousand dollars a year from their own paintings or prints. Our two orchestras support several dozen classical musicians, but band members? Get out of town — a gig will generally pay, at most, $100 for a night. Divide that up between six band members, count up the number of hours you spent between sound check and when you get paid at the end of the night, and you discover you’ve worked for less than minimum wage. By my estimation, it takes the average band member, performing once per week, more than a year to just pay off the cost of an instrument — never mind the cost of amps and cables and, of course, beer.

I don’t know what this says about Minnesota, I really don’t. We are a town that rightfully prides itself on our arts scene, and yet there is not a mechanism that allows our artists to make a living at it. When my mood about this is at its darkest, and I hear that oft-repeated claim that we have more theater seats per capita than Manhattan, I feel like offering a rude response. I want to say that we should not judge our theater scene by how many seats we have, but by how much money our actors make.

I don’t know whose fault this is. I suppose some of the blame lies with artists and arts organizations. I can speak about the world of theater best, because it is what I have the most direct experience with. The current tax laws encourage the development of nonprofit theater institutions, and those institutions have developed in such a way that most of the money goes into rent and administration. Very little, if any, of that money trickles down, and when it does it typically starts with the tech staff, with a little for the playwright (not much; most playwrights see less than $3k per year for their work), and even less, if any, for the actors. There is an actor’s union, Equity, that is supposed to protect against this, but local actors find themselves  struggling with whether to join Equity and only get infrequent paid work or not join at all, which gets them more work but no pay. But even actors who are Equity members and work all the time rarely make enough money for it to be more than a supplement to their real income, which comes from other sources.

I know it is not impossible to monetize the arts. There are really only two ways to do it: One must find a large audience that is willing to pay a little, or a small audience that is willing to pay a lot. Film and television use the former model, while fine arts choose the latter. A third method, the nonprofit method, is only as robust as its donor base, and when you have a really lively and populated arts scene, that money gets spread awfully thin, and most of it tends to get gobbled up but a few big organizations. For whatever reason, the arts in the Twin Cities has generally failed at both mass communicating and developing a collector’s market that is willing to shill out a lot of clams. It is as if some occult hand were at work, discouraging the arts market.

Admittedly, things are bad all over. The Twin Cities is not unique in having a limited arts market, and the arts tend to be a sort of canary in the coal mine of the economy — when it takes a nose dive, funding for the arts gets cut pretty quick. But we also know that this does not need to be the case — it may seem now that Hollywood is quite naturally the center of the film world. It is, after all, located in the second most populous city in America. But when the film industry started, Los Angeles was a speck on the map, and Hollywood itself consisted of barley, vineyards, and citrus fields. Los Angeles was a desert, and thrived despite its many limitations, instead of thanks to its advantages. Look at other centers of the arts in America, where people actually make a living making art. Austin, which is one of the animation capitals of America? Newark, which boasts some of the country’s highest paid fashion designers? Washington, D.C., which spends more per capita on arts than any city in America? Atlanta, which is one of America’s highest-paying cities for artists?

These are not, in general, cities defined by their hugeness; their success is contingent on either them locating a mass market for the art they produce or developing a base of high-rolling art collectors, something that, for the most part, the Twin Cities have failed to do. And the blame for this can’t just be laid at the feet of the artists. Industries develop with the assistance of state and local governments, but we allocate our tax breaks to other industries and literally bribe sports teams to remain.

And our audiences are notoriously chintzy — if you are part of an audience of 100 for a piece of theater, it’s going to cost you, and it’s still a bargain compared to seeing a band in Target Field. That $100 ticket you paid for a seat in a stadium will net you a worse view and a higher profit margin for the performer than the $20 you pay for a theater ticket, and all it really does is point out that we value out-of-state performers more than we value our own.

I suppose the unasked question is the following: Is this important? Minnesota has a laudable arts scene, and has managed it without having to pay its artists a living wage. We could probably keep on like this forever.

I don’t have an answer for that. Of course I think artists deserve to get paid; I am also an artist, and it’s always puzzled me that I make a lot more money as a critic — an industry that is secondary and dependent on an arts scene to exist — than I do as an artist. I do know this: For every artist who stays in the Twin Cities, scratching for a living that will support them while they make art, we lose a few to cities that actually pay their artists for the art they make. Some boomerang back — moving is no guarantee of financial success, and Minnesota has benefits to offer that sometimes outweigh those found making a living in the arts. But others stay away forever, an ongoing drain of the Twin Cities talent pool. And it’s often, although not always, people who are ambitious and risk-taking, and I think those are the sorts of people that you should want in your arts scene, rather than want them to leave.

Beyond that, having a monetized arts scene is a tremendous source of income for a city — and not just through taxing the profits, but also through secondary industries, like tourism. As an arts patron, I find it especially frustrating that the Vikings can squeeze money out of us just by threatening to leave, and yet we lose dozens, hundreds, thousands of artists per year and we scarcely notice.

I suppose I think the Twin Cities should be the sort of place people move to if they want to make a living in the arts, instead of move away from. And this strikes close to home for me, as this is a decision I am faced with, and in my life I’ve left Minnesota on a few occasions looking for better horizons as a professional artist. In general, I have found them elsewhere, and so Minneapolis, which is my hometown and a place that I think I have demonstrated enormous civic pride for, can only hold me for as long as I am OK not making a living doing the things that I trained to make a living doing.

I suspect there are a lot of artists wrestling with this just now, and I suspect it’s just the sort of thing you have to always wrestle with when you’re a Minnesota artist. I don’t know just what the solution is to this. I do feel comfortable, however, saying that it’s a problem.