The history of Twin Cities garage band music isn’t very well remembered, but, if it is remembered, it’s origins tend to begin with a Christmas holiday:

In Christmas of 1962, three Minneapolis band members vacationed at Balboa Island, Calif. These fellows had played in a variety of local party bands, so they mixed their holiday getaway with their love of music. When they weren’t stretched out on a beach, they looted California record stores for surf instrumentals.

These fellows returned to Minneapolis and cut record that welded together two songs by a raucous LA doowop band called The Rivingtons: “Papa-Ooh-Mow-Mow” and “The Bird’s the Word.” This they performed in gravelly, excitable vocals and a pounding surf beat, creating “Surfin’ Bird,” which tore up the national charts, and also birthed the local garage scene. 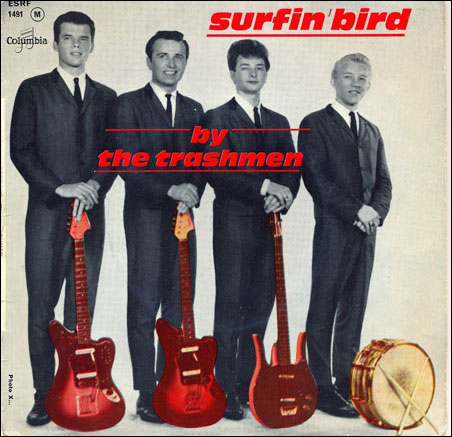 This is a pretty good history, as histories go. It forgets that there were already hundreds of teen bands in the Twin Cities, actively rehearsing in their parents’ garages — the Trashmen themselves were in a few, including the Strings Kings, who recorded some genuinely wild rockabilly inspired shouters for the Gaity label. But never mind. Stories have to start somewhere, and “Surfin’ Bird” is about as good a start as any. Besides, surf instrumentals hadn’t really found an audience in the Twin Cities before “Surfin’ Bird.” The Twin Cities isn’t really a surf town. But after the song broke, you’d be hard-pressed to find a local band that hadn’t incorporated the sound into their act in one way or another.

But there is a local 45 rpm single that’s worth mentioning as being a sort of transitional album, existing somewhere between the hillbilly rock and roll of the ’50s and the stripped-down garage beat of the ’60s. A local performer named Richard A. Caire released a song called “Trashman’s Blues” under the name Kai-Ray in 1961 (currently available as a vinyl single from Norton.) The song is an uptempo country blues number, but features a rollicking Bo Diddley beat, and includes Kai-Ray asking his local sanitation worker the cost of hauling away a pile of garbage. The song was a popular regional favorite, and is important to this story because The Trashmen took their name from it; Kai-Ray later penned a number of songs for the Trashmen, including their a Beach Boys-inspired anthem called “New Generation.”

But it is the flip side of “Trashman’s Blues” that interests us here. The song is called “I Want Some of That” (also often called “Jungle Talk”), and it’s a real oddity. The essential melody has a fairly straightforward rockabilly melody, but it is bookended by a wild, deliberately primitive chant. Over a relentless tom drum beat, Kai-Ray lets loose with a high keening, sounding something like the lampoon of Native-American tribal music that accompanies the Tomahawk Chop. Kai-Ray also makes a sort of melodic Bronx cheer before launching into his song, which, despite its lyrics, is also deliberately primitive, consisting of simple pidgin English phrases repeated over an over again. “Baby take it on back,” he exhorts. “Big coconut hat!”

The song is a very early example of a few features that would be hallmarks of ’60s garage music, particularly in the Twin Cities. His song’s faux-primitive sensibilities would pop up frequently in ’60s garage rock: It was a decade of caveman vests, pounding tom-toms, and pidgin lyrics. And Kai-Ray’s lunatic vocals throughout the song were the first of dozens, if not hundreds, of local tunes in which the singers had license to go haywire — most famously in the gibbered middle bridge of “Surfin’ Bird.” Kai-Ray’s song may not be the Twin Cities’ first garage band song, but it certainly is father to the scene — an early example of the weirdness and wildness that would pour of of Minneapolis for the next decade. It’s no wonder The Cramps, themselves known for weird and wild tastes, have covered so many songs from local rockers, including “Surfin’ Bird” — an, in the compilation albums “Songs the Cramps Taught Us,” included Kai-Ray’s “I Want Some of That.”

It’s interesting how local history can sometimes get embedded in garage rock songs like this — after all, they weren’t meant as documents of history, but instead as frat rock dance tunes. But another pair of songs, “Baldie Stomp” and “Baldie Beat” (the latter not available on YouTube, alas) by The Deacons, hints at a story that is otherwise entirely lost.

Musically, there’s not too much to say about these two mid-’60s local party rock tunes. They’re both three-chord wonders, the first using the same chord progressions as “Louie Louie” and “Wild Things,” a I-IV-V progression that served as the musical nuclear core of ’60s garage band music. The second song is essentially a remake of the first, replacing its blurting saxophone with a propulsive drum pattern. Both songs, lyrically, are invitations to dance (“It’s real neat to do the Baldie Beat; you move your arms and you grind your feet”), and the songs benefit from the sneering, laughing tone of The Deacon’s singer, as well as assorted shouts from the band, which give the songs the feeling of having been recorded live at a particularly wild frat party.

However, the songs become quite a bit more interesting if you know that they are celebrating a legendary — and possibly semi-mythical — youth gang from the Twin Cities (no direct relation to the antiracist skinhead group of the same name that originated in the Twin Cities in the ’80s). Nobody seems to know anybody who was actually a member of the group, but you meet quite a few people who claim that their older brother was friends with someone in the gang. The Baldies are supposed to have shaved their heads, at least up until 1964, when they all switched to Beatles haircuts. The Baldies were middle class and mod, with their uniform of choice being Gant shirts with a loop at the back of the neck and high, tight trousers that they cinched with belts with oversized buckles, which could be removed quickly and wrapped around the hand to serve an an improvised brass knuckles. But their real weapon of choice were their feet: The Baldies liked to kick, and wore steel-toe wingtip shoes to make their kicks vicious.

The Baldies rumbled with a more working-class gang, The Animals, a group of greasers in blue jeans and white T-shirts who carried around metal combs with long points, which they sharpened into makeshift shivs. The Animals reportedly also filed their teeth to sharp points, and it was a point of pride among The Baldies to kick them in the teeth, in order to leave Animal toothprints (perhaps even teeth!) embedded in their shoes. The local law didn’t seem to take these rumors of youth gangs too seriously, tending to dismiss them as either exaggerated nonsense or as a problem for school supervisors; interestingly, a number of Baldies are supposed to have gone on to joint the Twin Cities police force.

The Deacons make no real reference to their eponymous youth gang in their songs, although one supposes they probably actually played the song at parties where Baldies were in attendance. It is, however, a little unnerving to hear The Deacons insist that their dance involves grinding the feet, as, when actual Baldies ground their feet, teeth may have gone flying.