The steady stream of beeps and bloops and rings began shortly before 10 p.m. last night, and the common message, “Carr died” set off a cavalcade of memories that lasted well into the morning hours.

Everyone somewhere has a list of the truly interesting people they’ve met along the path of life, and David Carr is on mine. But that hardly makes me unique. Carr, who had written on media for the New York Times for the past decade, is on a lot of people’s lists, whether they considered him friend, rival or foe.

We met in the mid-1980s. At the time, I was editing the Twin Cities Reader, the alternative weekly then competing with City Pages. With an editorial budget that was half nickels from the change jar and half whatever LPs you could grab from the swag stack, I had a desperate need for anyone who could a.) ask an interesting question, and b.) cobble the response into something worth reading, in an alternative way. Carr fit the bill, and then some.

Over the years, Carr, as most people around the Twin Cities called him (although after I got to know him I preferred the more apt “Carr-zilla”), was far too kind in mentioning me as the guy who gave him his first big break. Nonsense. The big, blubbery, disheveled guy with the classic caustic Irish wit who wandered into my office way back when was one of the biggest breaks I ever got.

Here was a character with an enormous appetite for a lot of the exhilarations of life, including telling a damn good story. There was nothing gray or homogenous about Carr. I may have kissed him after he delivered his second or third piece for me.

( To get a sense of that time – and to have a laugh — check out this series of clips compiled by Tom Oszman at TCMediaNow from a cable access show Carr, Eric Eskola, Dane Smith, David Brauer and I did back in the 1980s.)

As two turned to three this morning I kept rolling back and forth the yin and yang of Carr’s existence. A couple years ago in New York, we fell into a conversation about the essentials of a good reporter. I could never pretend to be one. Carr was by then in the pantheon of “greats.” A fundamental facet of being a great reporter, as he saw it—and one with which I completely agree—is the ability to play a “Hi-Lo game.” Plenty of dutiful, earnest news people can interact well with officialdom, the “Hi” game, nibbling at and parrying with the rule-bound bureaucracies of politics and business. But the same people very often struggle attempting to draw life and meaning from the “Lo”: the unsophisticated, the meek, the duller-witted and the criminal. To be able to speak in both voices, and more importantly ask persistent questions of each, is a special talent, and in Carr’s case one that required living each first-hand.

Carr’s remarkable life arc depended on him never forgetting he was from barely-middle-class Hopkins, raised by a “rag man” father (he worked in a men’s clothing store) and his “career Irish” mom. Nor did he ever forget the abyss into which he fell. We talked about that hole, his oft-recalled collapse into crack addiction, simultaneous with a Hodgkins lymphoma diagnosis, for his book, “Night of the Gun.”

I knew him most, if not best, back in those days, in no small part because of the fact that — before he completely cratered — running with Carr was, as I told a reporter last night, just ridiculously great fun. Whether it was in the back room at Moby Dick’s — where he seemed to be on a first-name basis with a collection of characters who had never heard of Hopkins much less “The World’s Shortest St. Patrick’s Day Parade”—or teetering off the roof of the old Produce Bank Building, a night with Carr invariably meant tasting the exhilaration of scuffing up against mortality. When the book (which is a terrific read) was published, I complimented him for being brave enough to factor in the “fun factor” of his slide to near-oblivion. Junkie memoirs are rarely honest until they give full perspective on the “why?” 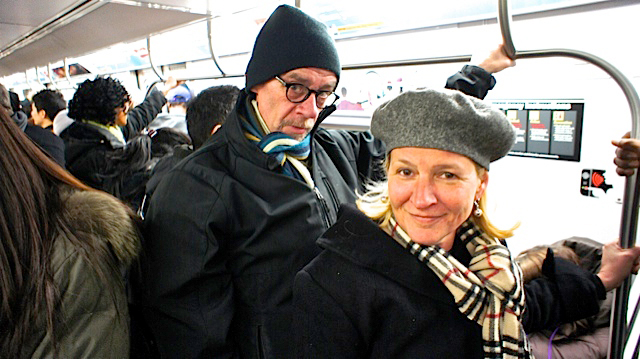 MinnPost file photo by Brian LambertDavid Carr on the subway with his wife, Jill Rooney in April 2013.

Because of how we met, I had a different relationship with Carr than a lot of his local journalism peers. As he clawed himself back out of the abyss — and in a true secular miracle, restored his credibility — he became the employer and the mentor, and according to muttered legends was not always easy to deal with. Probably because he respected effort as much as talent, and when he didn’t see the former he was much less impressed with the latter.

I didn’t see Carr as much in recent years. We had dinner with our wives in New York a couple years ago, a night memorable as much for his extraordinary, almost over-the-top politeness to the waiters as the conversation we had. (He never forgot his years “wearing the scales,” i.e. the goofy theme apron that was required for his onetime job at a local seafood joint.)

I was reluctant to ask more of his time than an occasional phone call, but over the years he inferred that he didn’t expect to live into his dotage. Damage from chemo treatments and god-knows-what recreational drugs he had done had pretty well guaranteed he wasn’t going to be doing a counterculture version of Andy Rooney. I suspected and asked — though he never answered directly — that his constant awareness of a more imminent mortality propelled him, in both the quantity and quality of the work he did, especially with the Times.

That and his innate compulsions. Carr’s greatest talent was unchecked curiosity. He asked questions. Lots of questions. Constant questions. He truly wanted to know, as he often said, “What’s your story?” As anyone who has ever been courted can tell you, the magic of someone’s focused curiosity in you is a powerful, disarming force. To the point you’re surprised at what you hear yourself saying in response, things personal enough to create a substantial bond.

I was often surprised at how often I thought about Carr, and it was usually in comparative terms. On a professional level, it’s not always comfortable to measure yourself against a former peer. But all things considered, I found it healthy, in a humbling way. And before I finally nodded off last night, sometime close to four, I was laughing again, about how an innocent trip to see David Bowie at the Rosemont Horizon in Chicago turned into an all-night-and-past-dawn crawl of the seediest collection of grunge and blues bars I’d ever seen before … or since.

The passing of interesting people leaves a unique vacuum in our lives. The vacuum in Carr’s wake is, as the kids say today, “kinda epic.”