Over the past 25 years, the common migration in the Twin Cities has been for PiPress reporters to build up enough clips and credibility to move west to the Strib, where both the pay and readership numbers are higher. Sports columnist Patrick Reusse moved across the river. As did political writer Jim Ragsdale. Nick Coleman started with the Strib, shifted back to his hometown, then reversed course and returned to Minneapolis.

So when Rachel Stassen-Berger, the Strib’s sharp-tongued Capitol bureau reporter, announced in late December she was headed back to the Pioneer Press, where she worked prior to joining the Strib, eyebrows arched en masse. Conventional wisdom has it that the PiPress, at least as a business entity, has all but entered hospice care; that anyone who has an option to leave, leaves. No one buys back in, at least no under their own volition, and certainly not someone of Stassen-Berger’s value.

Yet that’s exactly what happened. A month into the current legislative session, Stassen-Berger—savvy, well-sourced, intensely-competitive, and hip to social media to the point where therapy might be in order—filed her first piece from her new (and old) perch, along with her usual torrent of Twitter posts.

Her new boss, Editor Mike Burbach, naturally professes great delight in having her back. “She worked here; we stayed in touch. We had an opening, and we made her an offer,” he said. “I couldn’t be happier.”

For her part, Stassen-Berger explains. “Mike, who I’ve known for years and years, made me an offer I couldn’t refuse and I’m glad I didn’t.”

The opening was largely due to the semi-retirement of Bill Salisbury, another legend at the Capitol — and another example of institutional memory that is uniquely valuable in an intense, sprawling beat like state government. (There are reasons why people like WCCO-TV’s Pat Kessler, KSTP-TV’s Tom Hauser and WCCO radio’s Eric Eskola hang on as long as they do. So much of what they know can’t be taught.)

The terms of the deal Burbach and Stassen-Berger struck include her functioning, Burbach says, as “10 percent bureau chief and 90 percent reporter.” What this means in practice, Stassen-Berger says, is that she won’t be responsible for editing colleagues Doug Belden, David Montgomery and Salisbury, “but I’m involved in shaping our coverage, sharpening our focus and getting the most out of our resources.”

Her PiPress team has been given more or less specific areas of coverage. Montgomery, hired from the Sioux Falls Argus-Leader, is the staff geek, happily transforming data into digestible stories and graphics. Belden has what Stassen-Berger calls the “sins and vices” beat: legislation pertaining to guns, alcohol, tobacco and pot. “We’re still trying to decide if hemp comes under that banner,” she says.

Her over-arching mission statement, cooked up with Burbach and other editors downtown, is the mostly-vanilla-and-eminently-fungible vow, “To be distinctive. To bring clarity, and establish a point of origin for issues.” 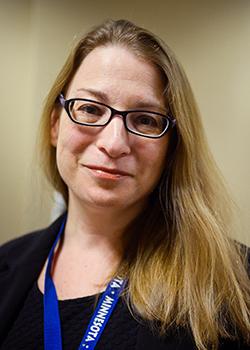 None of which really explains why she left the Star Tribune. When asked for a response to rumors of unhappiness at the Strib, she replies bluntly, “I don’t respond to rumors.”

Pat Lopez, Stassen-Berger’s former boss at the Strib says only, “It’s a personnel matter and a confidentiality thing.”

While Stassen-Berger’s departure was the most conspicuous move, it also punctuates a trend for the Strib at the Capitol, as veteran reporters have moved away to other beats. Such people as Mark Brunswick, Mike Kaszuba, Jennifer Brooks, Pat Doyle and Baird Helgeson are gone, replaced by longtime AP reporter Pat Condon and a new crop: Ricardo Lopez, Abby Simons, and J. Patrick Coolican, with Allison Sherry in DC.

Lopez says there aren’t any specific issues that explains the churn of reporters through the Strib’s capitol office. As Lopez explains it, all is well and good, and she couldn’t be more excited to be working with her new team.

Star Tribune Editor and Senior VP Rene Sanchez echoes Lopez’s view. And though he concedes that the Capitol turnover raises a “reasonable question from people paying close attention” Sanchez says, “I defy anyone to show how our coverage is diminished or weakened by the changes we’ve made.”

He lauds Ricardo Lopez’s weekend piece on the state’s teacher lay-off systems as an example of the new juice running through the Capitol, and points to Condon as a veteran along the lines of Ragsdale. Asked why, given Ragsdale’s well-known health issues, he didn’t make a point of retaining Stassen-Berger, Sanchez says, “It would not be appropriate for me to deconstruct that.”

There is of course no way to prove that the Strib’s “pol-gov coverage” as Sanchez refers to it, has been diminished by the departures of so many established reporters. Condon and the younger turks will likely provide solid coverage.

But since it’s the Strib we’re talking about, the largest and best resourced newsroom covering state government, it seems both fair and reasonable to wonder what an unusually high number of veteran departures does to the paper’s coverage.

Will Stassen-Berger’s jump back to St. Paul cripple the Strib? Not likely. And Sanchez even argues that her presence across the river will make his new team all the better for the competition. And while it is true that worrying and kvetching is as instinctual to reporters as exhaling, the Strib’s situation on a target-rich environment like “pol-gov” bears noting, and watching.

Why did Rachel Stassen-Berger leave the Star Tribune?