Having once worked in a daily newsroom — where every spring brought an all-hands alert about fruit fly infestations; where the maintenance guy with the booming voice and sardonic sense of humor once strolled past shouting, “Outta the way, new carpet coming through!” while yanking yard-long ribbons of duct tape from heavy duty spools — a tour Thursday of the Star Tribune’s new digs in the Capella Tower was a little like the first time I saw Epcot Center. “So, at long last, the future has finally arrived.”

After nearly a decade of “suspended animation,” as top editor Rene Sanchez described it — during which various owners came and went and stadiums were proposed and finally put under construction (with the enthusiastic support of the paper itself) — the Star Tribune is finally vacating its Art Deco fortress on Portland Avenue for three floors in the “flying saucer” skyscraper across from the Hennepin County Government Center. The first full day in the new digs will be March 30.

The space, soon to be sullied by a culture of professionals never known for tidiness or their sense of feng shui, is bright, open, pre-wired for whatever anyone today can imagine the “digital future” will bring, and infinitely better looking than the now mostly empty space they’re leaving.

Where the Star Tribune once housed 2,500 people in about 250,000 square feet, the new offices will see 600 occupy roughly 135,000 square feet, in a configuration that required sawing a three-story hole for a staircase from floors 13 to 11.

Sanchez was the newsroom representative for the 90-minute tour (or half the time it took Gilligan’s “Minnow” to get lost in a storm). Among the many features of the new space: non-flickering, non-humming LED lighting throughout; electronically adjustable desks for every inkless wretch; an audio system that feeds in just enough white noise to take the edge off sharp voices and machinery; and about as many TV monitors as a Buffalo Wild Wings.

The move also comes with the likelihood of more public interactivity than ever before, both electronically and physically. The actual newsroom, located on the 12th floor and sandwiched between administration and advertising departments, has actual editing rooms and a plenty-large (for the moment) studio for pushing the paper ever more into the video age.

Capella Tower — which Sanchez says will soon have “big, bold exterior signage” on the Government Center side signifying the building’s new tenant  — also has a large, glassy street-level atrium that the Strib is already considering as a convenient forum for presentations on various topics: talks by columnists, reporters and sports writers for example, and who knows what else. An actual “town hall” regularly hosted by the state’s largest news organization, is an intriguing option if the paper is truly interesting in mixing it up with the citizenry, or rabble, as the case may be.

The centerpiece of the newsroom is literally a hub, a circular command deck, immediately adjacent to (yet another) glassed-in conference room for the day’s various news huddles. A tower of monitors beaming in everything from business networks to game shows to FoxNews, which should keep Team Strib up-to-the-second with the latest in international atrocities, financial skullduggery and the Kardashians. Likewise, each reporter’s terminal is wired for high-speed streaming video. The days when a TV critic had to ask to use the publisher’s 10-inch RCA with the rabbit ears are long gone. 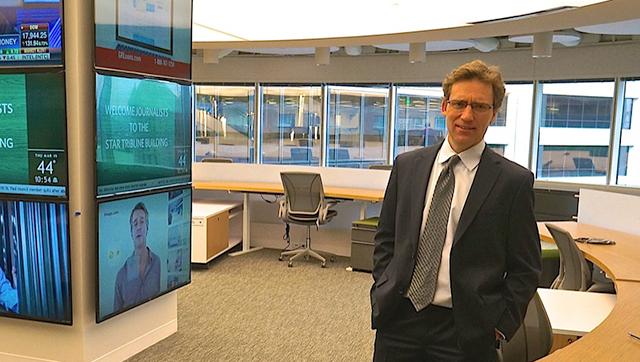 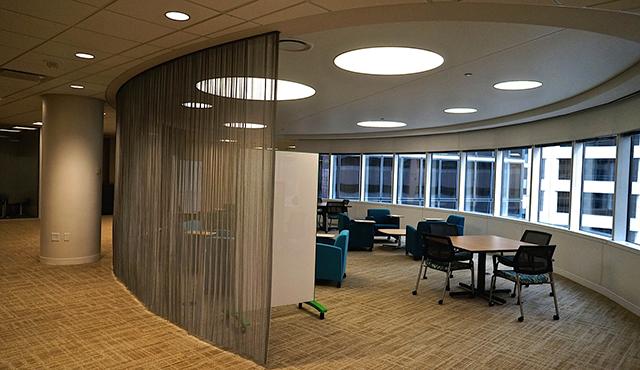 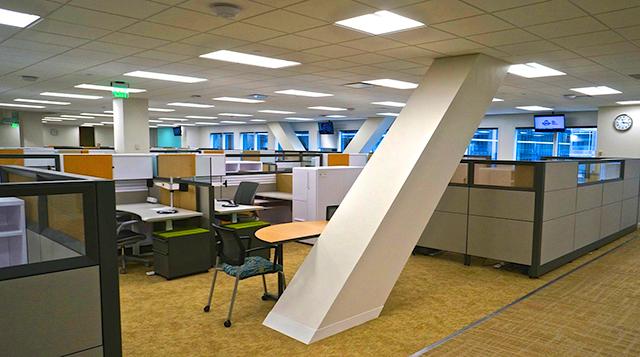 MinnPost photo by Brian Lambert
The 12th floor newsroom has editing rooms and a large studio for producing videos. 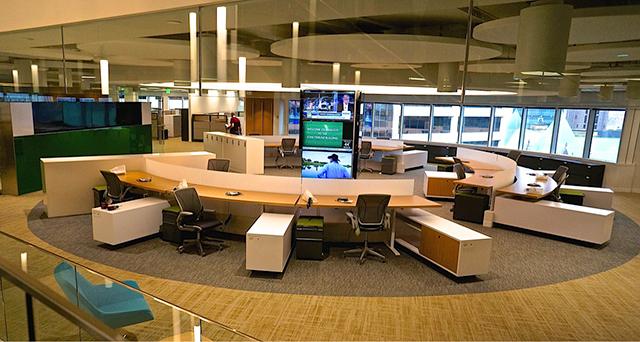 MinnPost photo by Brian Lambert
The centerpiece of the newsroom, a circular command deck, immediately adjacent to glassed-in conference room. 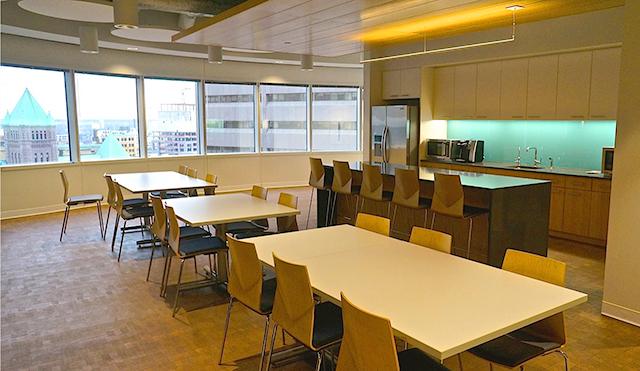 MinnPost photo by Brian Lambert
The break room on the 13th floor. 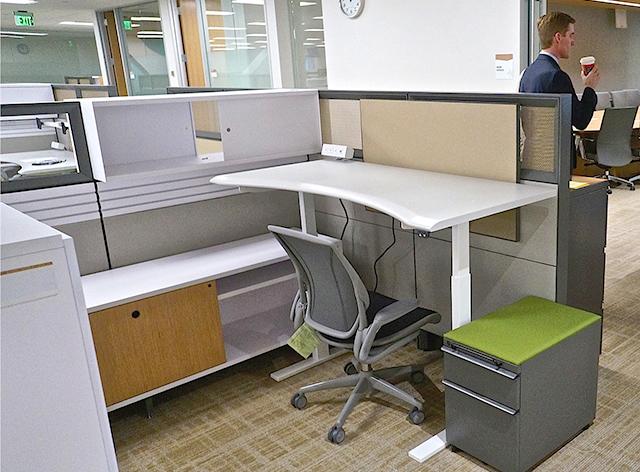 MinnPost photo by Brian Lambert
Every desk in the new offices is electronically adjustable. 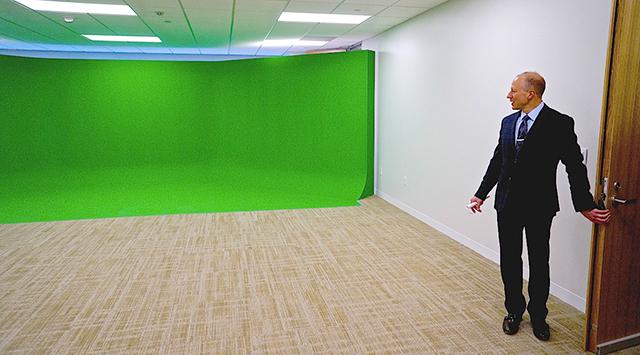 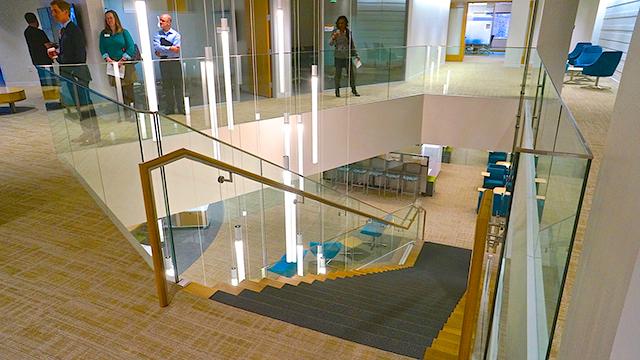 MinnPost photo by Brian Lambert
Three-story stairway goes from the 13th to the newsroom on the 12th floor.