Whatever else you might say about him, John Rogers was clearly one hell of a salesman.

After first buying up several high-profile collections of sports memorabilia, the Little Rock entrepreneur hit on the idea of talking big-city newspapers out of their predigital photo archives. The basic deal being that after negotiating a price, his Rogers Photo Archive would send a truck or two up, package the not­-so-­orderly files of old photos and negatives and haul them back to Arkansas. There his staff would painstakingly scan and organize the material. This would allow the papers to have far more convenient access to their archives — and gave Rogers the photographs and shared rights to the images.

It worked until it didn’t.

Today, Rogers faces more than a dozen lawsuits, which together seek something north of $90 million. First, sports collectors who bought what they thought were original items from Rogers began crying “fake.” Then a series of people Rogers did business with started suing him over unpaid bills. Finally, the FBI raided his place, and he was tossed out of the business, a receiver appointed to make sense of the mess.

The thought that big-city newspapers like the Star Tribune and Pioneer Press here in Minnesota — and others in Chicago, Detroit and Denver — were willing to hand over (for a nice price) one of their (and their community’s) most valuable historical archives to a character like Rogers is startling in itself, and may explain why so little has been said about the deal.

It is kind of embarrassing.

Reporting about Rogers by any of the papers known to have bought into his now-foundered scheme is rare to non­existent. Locally, those in the know aren’t  much more forthcoming. Calls to PiPress Editor Mike Burbach, (the preferred go­-to guy for staffers reluctant to say anything on record), were not returned. After a bit of bouncing around, the Strib’s VP for marketing, Steve Yaeger, got back to concede, “Oh, it’s a story and a half. But because we still have business matters with [Rogers] I can’t say very much about it.”

Features department photo editor Tom Sweeney, who was surprised to hear of the raid and lawsuits against Rogers, had confirmed that the Strib trucked off their photos to Rogers roughly 18 months ago. He did say that Rogers’ operation had notified the Strib that work had been completed, and that the digital archive was ready, which Sweeney said the paper has accessed successfully. Significantly, Sweeney also said the Strib never parted with its vast trove of negatives.

While Rogers’ standard deal with other papers has been for him to retain the originals — some papers’ classic pre-1960s sports photos have appeared on eBay — Yaeger added that as far he knows, the Strib has had everything it originally packed off with Rogers returned to it, “although I can’t say if we’ve got 100 percent of it back.”

Rogers’ pitch made sense to cash-­strapped papers looking at literally thousands of employee hours to scan and organize what were sometimes a 100 years’ worth of photos. And while the idea of turning photo archives over to, say, a local historical society sounds nice, in reality none of them has the staff or technical resources to do the work Rogers promised to do.

In a 2009 interview with the Chicago Tribune’s Phil Rosenthal, shortly after signing his deal for the Sun­Times’ archive, Rogers said, “We’re at liberty to do whatever we want to with those (original photos and negatives). When we hand (the newspapers) the digital product back and they start leasing these things to the public and making posters or whatever they’re going to do, that’s 100 percent [profit for] them.” 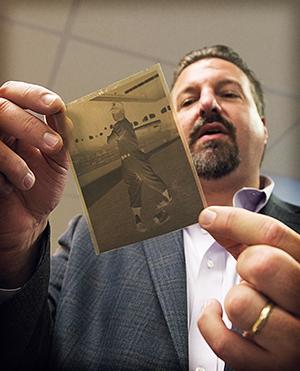 “The papers always wonder what’s the catch,” he continued. “‘You’re going to give us lots of money and you’re going to digitize it for free, which costs millions of dollars? What do you get?’ We get the photos. They don’t get why someone would care about old photos.”

One source with knowledge of the PiPress situation estimated that that paper’s photo archive might contain “as many as 1.5 million images. The Star Tribune’s could be closer to 3.5 million. Altogether, with every paper he’s done a deal with, we may be talking as much as 200 million images.”

Down in Arkansas, the best coverage of the Rogers operation has come from George Waldon at Arkansas Business. (Alas, there’s a paywall on his stuff.) “We haven’t seen the actual contracts,” he says, “and each could be different. But the standard deal seems to have been that Rogers takes all the material, scans it and provides digital copies but retains the original prints and negatives to sell as he chooses.”

Until the FBI’s raid, the material was stored in “a big, pretty posh, climate-­controlled warehouse out in the [Little Rock] suburbs,” said Waldon. The court-­appointed receiver (who did not return a call for comment) now has control of what’s still in the building. Where the operation once had nearly 100 employees, Waldon says the staff has been boiled down to a maintenance crew of less than 10.

“We always kind of wondered about him,” says Waldon, “ever since he first popped up with that Honus Wagner card.” In 2008, Rogers, then 38, bought one of the most sought-­after baseball cards in the world, a T206 Honus Wagner card, for $1.62 million. “No one had heard much about him until then,” said Waldon. “But then he started buying up all these newspaper archives and living pretty large. At one point he had a penthouse overlooking Central Park in New York — although that was a lease deal.”

One rumor had Rogers out­sourcing some of the archiving work to India. But no one can confirm that. He has, however, closed deals with newspapers in Australia and New Zealand, and a news group from down under, Fairfax Media, has already gone to court against Rogers.

“The fate of an invaluable archive of up to 8 million historic New Zealand newspaper photographs and negatives is before the courts in Little Rock, Arkansas,” Brian Rudman of The New Zealand Herald writes. “Fairfax Media is endeavouring to recover the photo archives of 72 New Zealand newspapers dating back to the 19th century, along with those of the Sydney Morning Herald, the Melbourne Age, and other Australian newspapers. In May 2013, the Australian media empire did a deal with Rogers Photo Archive (RPA), Little Rock, to sell the photos, in return for the United States firm digitally copying them, and providing digital files back to New Zealand and Australia. RPA is now in receivership and faces at least 10 lawsuits totalling more than $94 million.”

The strange saga of John Rogers, the man who bought the Star Tribune’s vintage photo archive