To the Strib’s credit, the mystery of “Who Really is Olive Allen?” didn’t linger very long.

Avid op-ed page readers may have caught the correction at the bottom of Thursday’s letters column. On­line it reads essentially the same:

Because of incorrect information provided by the author to the Star Tribune, this commentary was originally published under a pseudonym. It is the policy of the opinion pages to attribute commentaries and letters to the editor to authors’ real names, with exceptions possible in rare cases — when pre-approved by editors — to provide anonymity in extremely sensitive situations.

The commentary was a surprisingly lavish defense of prominent restaurateur Jason McLean, (the Loring Pasta Bar, Varsity Theater), currently embroiled in serious allegations of sexual abuse during his years with the Children’s Theater Company back in the ’80s. The piece was so praiseful of McLean’s various contributions to the Twin Cities arts and dining scene you might have thought it was a “placed commentary” whipped by some PR firm, if not written by McLean himself. And some did think that, with fair reason.

Kate-Madonna Hindes herself owns a small PR shop, “Girl meets Geek,” and also writes a blog with the same title. A rape survivor, she was infuriated by the commentary (and the Strib for running it) and set out to find the author, Olive Allen, “a writer in Minneapolis,” according to the Strib credit line.

The problem was that no such person turned up after hunts through Google and the usual social media venues. She says she and her friends even scanned census data looking for the now mysterious Ms. Allen. (The closest I could find was a young woman named “Olivia Allen,” whom I suspect was baffled by my Twitter query asking if she had written something for the Star Tribune.)

On her blog, Hindes wrote: “I want to believe the Star Tribune published the piece as a ploy for readership — nothing more. But now, I believe it’s the work of a lazy editorial staff who never bothered to fact-­check the named penned on the Jason McLean piece. Could it have been done to sway public opinion by a legal team or public relations before his trial begins? After multiple searches, I couldn’t find an Olive Allen who was a writer in Minneapolis — that’s when I knew, something strange was going on. I just didn’t realize the extent of it all.” 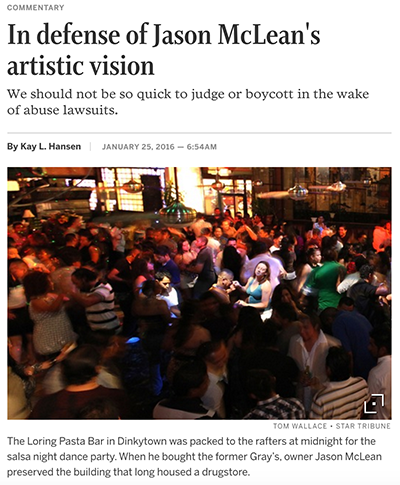 As it turns out, Hindes was mostly right. Her suspicion that the “Olive” in question could be McLean’s daughter and Loring Pasta Bar employee, Olive McLean, didn’t pan out. But she was dead­-on about someone using a pseudonym and getting it past the Strib’s op-ed boffins.

My antenna began twitching when the Strib’s commentary editor, Doug Tice, didn’t return calls asking simply if he had vetted Olive Allen and was confident she was who she claimed she was. As it turns out, Tice and Scott Gillespie, editor of the editorial pages, were busy a big chunk of Wednesday trying to ferret out the reality of who wrote “In defense of Jason McLean’s artistic vision.”

Late Wednesday, Gillespie called with the tale. No, Olive Allen was not the author’s real name, he said. And, if you’re wondering: No, he was not pleased that someone had gamed his commentary system.

“The writer’s real name is Kay L. Hansen,” said Gillespie, and because of her use of a pseudonym, which the Strib allows for commenters but not for freelance pieces like an op­-ed column, changes were going to be made.

Gillespie says the plan is to have revised standards for commentaries, clearly prohibiting the use of pseudonyms, in the paper and up on the website “sometime next week, I hope.”

Thursday morning, Hansen e­mailed me, (Gillespie having told her I was asking questions):

First of all, I don’t have a relationship, per se, with Jason Mclean. I’ve been a big fan of his work since the old Loring Bar and Café days and, as such, a loyal customer. In 20 years I’ve had a handful of conversations with him and always in the context of customer to proprietor. Regarding my nom de plume: I’ve used ‘Olive’ or ‘Olive Allen’ for years. ‘Olive’ is for my great aunt and ‘Allen’ is for my grandmother’s maiden name. It has nothing to do with anyone in the Mclean family. I’m not, as some have suggested, an agent of the McLeans, the Loring Pasta Bar or the Varsity Theater.

The reason I decided to invoke Olive for the Star Tribune is the same reason I decided to write the counterpoint in the first place: When the internet attacks, it goes for the jugular and I already knew this story was getting people worked up. I was merely trying to protect myself. After reading the initial story about the accusations against Jason McLean, I stepped back and watched as social media moved in and started picking at it. After awhile, it seemed to me that social media circles weren’t interested in justice so much as they were interested in total annihilation.

After my op­-ed was published, I watched one particular Facebook thread tear it, and Olive, to shreds. Each indignant comment grew the thread ­­ and it’s level of fury ­­ exponentially. Commenters on the thread all but accused Olive of being pro rape (for the record, I’m not) and set about trying to track her down.

I asked her about the interaction with the Strib when they contacted her about “Olive Allen.”

After the social media sleuths discovered Olive had no internet footprint, the Strib called me and asked me if Olive was a pseudonym. I said ‘yes.’ Though understanding and kind, they were not happy with me, told me it violated the paper’s policy and that they would mull over ideas on how to correct the situation. I then offered a written correction of my own:

‘A few days ago, moved by, what seemed to me, a rush to punitive action regarding the Jason Mclean issue, I sat down and penned a letter to the editor. The letter was meant to point out the positive and lasting impact of Mclean’s artistic vision and to caution against ‘cutting off our nose to spite our face.’

Emotions run high on issues of sexual misconduct and abuse. The court of public opinion, fueled by social media, can be brutal and, sometimes, scary. Which is why I chose to sign my letter using my nom de plume, “Olive Allen.”‘

The blowback was immediate. Indignant readers quickly deduced that ‘Olive Allen’ was a pen name and that put the Star Tribune on the spot. I apologize and I take full responsibility for the deception.

The most interesting takeaways from the episode are these: