Bob Odenkirk had to shake his head.

When you set out in search of the grittier, grimier details of late New York Times columnist David Carr’s wild formative years in Minneapolis, you hear stuff, like the one about the toilet paper dispenser from the men’s room at Tam’s East Garden.

Odenkirk, the producer and star of “Better Call Saul,” the spin­off prequel to “Breaking Bad,” — a guy familiar enough with outrageously drugged behavior (fictionally I mean) — smiled too as Ed Nagle, arguably Carr’s best buddy, remembered how it often went down back at Tam’s in the mid­-1980s well after midnight.

One obvious irony between then and now being that Nagle was telling the tale Sunday night over dinner at 112 Eatery, which is kind of a world apart from Tam’s. Certainly for those who made regular stops of the two joints 30 years ago. Fine dining, Tam’s wasn’t.

Odenkirk made a 48­-hour stop in the Twin Cities to soak up stories, sights and atmospherics for a planned six­-part adaptation of Carr’s 2007 memoir, “The Night of the Gun.” He and his team are hoping to film it a year from now for AMC, the venue for both “Breaking Bad” and “Saul.” (The word “iconic” is grievously overused these days. But Odenkirk’s Saul Goodman genuinely warrants the commendation.)

Gracious and serious, Odenkirk lugged his MacBook Air around town checking out neighborhoods and characters key to understanding the personal and cultural path of Carr, a guy who went from post­-college party animal to subterranean crack addict to (as his boss at The New York Times described him) “the best media writer of his generation,” a field that, while not large, includes some pretty talented people.

Driving and walking between meet­ups, Odenkirk was candid about the responsibility of doing right by Carr’s remarkable story and the difficulty of shooting “the Minneapolis years” in Minneapolis.

“We pitched HBO, FX and AMC,” he said. “HBO does some great shows. But the problem people like us have dealing with them is that we could put in literally years of work on scripts and budgets and they could pull the plug at the last minute and leave you standing there. That’s happened. So we had to factor that in.” FX, home to “Fargo” (in which Odenkirk played a supporting role) was also receptive. But he says it was AMC who showed, as he puts it, “the most commitment.”

Obviously, the success of the two series he’s done for AMC counts for something. But Hollywood is Hollywood. And it’s always as much “What will you do for me tomorrow?” as it is “What have you done for me lately?”

He says writer Shawn (“The Shield”) Ryan’s pitch for Carr’s story was based on a “completely detailed outline of the entire six­ episodes. It was terrific.”

Should “Night of the Gun” get made — and Odenkirk has a show biz veteran’s gimlet­-eyed optimism that, given the commitment AMC has agreed to, it will go into production maybe as early as next spring — the story arc will exceed that of Carr’s book. “We’re going to get into things he didn’t talk about, and we’re going to take it to the day he dies, in the offices of The New York Times,” Odenkirk says.

But as the stories from people like Nagle and local musician Paul Metsa accumulated over the visit, Odenkirk seemed to be weighing the sheer amount of material and possibilities available to him and his writers. Not the least of those being Carr’s coincidental, and in some entirely dramatically valid ways, symbiotic interaction with the Twin Cities music scene of the era. Namely, the flowering of Prince, Hüsker Dü and others, including The Replacements, one of Odenkirk’s personal favorites.

Purely from a marketing standpoint, blending in the actual soundtrack of that era, background music to the hilarity and hell Carr was putting himself and others through, is an idea with a lot of upside to it.

“Have you read Bob Mehr’s book, [“Trouble Boys”]?” Odenkirk asks. “The way he describes [Paul] Westerberg is fascinating. I’ve seen a lot of that. The changes fame puts a person through. The shift in a person’s sense of responsibility to other people. It isn’t pretty. Arrogance. Dismissiveness. It’s very self­-isolating. You end up alienating a lot of the people you really need in your life, especially when your life is changing so quickly. And it happens a lot.

“From what [Carr] said in his book and what I’ve picked up talking to his daughter Erin and people like Tom Arnold, David experienced some of that. Erin told me that her dad really enjoyed being a celebrity, that it kind of went to his head to some extent. That becomes another facet that makes this story so interesting.”

Odenkirk, whose father was an alcoholic, met Carr only once. Carr, a big “Breaking Bad” fan (who wasn’t?), flew out to the “Saul” set in Albuquerque as the first episodes were being shot. (By chance, Odenkirk had already read Carr’s book.) They were scheduled to meet again in New York in February of last year, as Odenkirk was flying back from London, but Carr collapsed and died three days before.

“At that point,” when Carr came out to the “Saul” set, “I was pretty sick of doing interviews and just wanted to get back to work. But, you know, some guy from The New York Times calls and says he’s interested in what you’re doing, you make time.”

As the neighborhoods of south Minneapolis rolled by, Odenkirk recalled Carr watching them shoot a few scenes and saying: “I don’t know how you can do that. Shooting the same lines over and over again. It’s got to be boring as hell.”

“‘Yeah,’ I told him, ‘It is boring as hell, and it kind of drives you nuts sometimes. But it’s the job. It’s what I do.’ I gathered David liked the constant change and variety of what he was doing.”

Walking around 37th and Garfield in Minneapolis, the scene of a key moment in Carr’s rock bottom, the day was far too fresh and sunny and benign to capture the quintessence of Minneapolis on dark, cold winter night: streets, lawns and sidewalks heaped with filthy slag heaps of frozen snow. It was around there that Carr, his infant twin daughters in their not-nearly-warm-enough snowsuits, dropped into a dealer planning to pick up a little something for the night and ended up lingering for hours, forgetting about the kids in the cold car.

“This area looks good,” said Odenkirk, snapping pictures with his phone. “You say it hasn’t changed much? If it were up to me I’d shoot it here. This kind of neighborhood would work. But the problem … is that so many places David and his friends hung out in in the ’80s are gone now. [McCready’s Bar, Moby Dicks, Tam’s]. So I know the people at Sony [which is partnering with AMC on the deal] are going to ask, “If we have to build all these places, what’s the point? Especially if we can get a better tax break in Calgary?’ Even with all the new glass towers, Calgary still has a lot of neighborhoods of that era.” 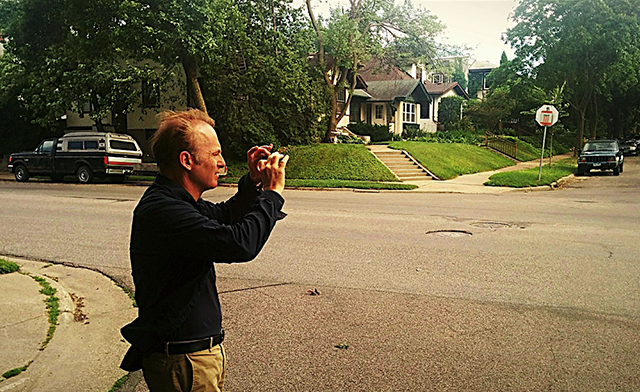 MinnPost photo by Brian Lambert
Bob Odenkirk photographing areas of the 36th and Garfield neighborhood, site of a key moment in David Carr’s memoir, “The Night of the Gun.”

Over the course of the whirlwind visit, Odenkirk was reassured that tax disadvantage withstanding, Minneapolis could probably meet his team’s need for actors and equipment. “There’s a lot more commercial work done here than I first thought,” he said. “That’s good. But another problem is top line crew, a [director of photography], that kind of thing. Sony would be paying to fly those kind of people in and putting them up. Even in Albuquerque it’s different, since it’s only an hour and a half from LA, and so many really top-end production people have been working out there since ‘Breaking Bad’ started. Hell, some are even semi­retired and have bought houses up in the mountains.”

No tour of Carr’s Trail of Beers and Tears would be complete without a stop at the CC Club, although happy hour was about seven hours earlier than when Carr, Nagle, Arnold and Metsa and others usually convened in the back booth next to the ladies’ restroom.

Metsa, the Iron Ranger polymath, still writing, rocking and gigging after all these years (his regular Thursday night gig is at Shaw’s on University), had Odenkirk amused with stories about how the gang would stash small packets of recreational narcotics under the upholstered seat bench in that particular booth, in the not unlikely case that one of them might need a quick pick-­me-­up at an odd hour of the day. Odenkirk seemed impressed by the honor system, as the dope would be exchanged for cash, which the buyer would slide under the cushion and the seller would stop by later to pick up.

Then there was the tale of the time Metsa got busted in a raid on dealer “Tony the Hat’s” place. Getting collared was bad enough. But Metsa had passed out buck naked on a hot night and the cops cuffed him “face down in this shag carpeting.” (Note to “Night of the Gun” art director: Don’t forget the shag.)

It was frankly surprising how many people recognized Odenkirk, who isn’t exactly George Clooney or Bradley Cooper. A half dozen people at the CC Club asked to have their pictures taken with him. (No one asks for autographs anymore.) And another couple stopped him on the street. South Minneapolis may be a target demo for Saul Goodman.

One woman, still cranking the steering wheel to parallel park an SUV on Garfield yelled across the street at a guy snapping cellphone pictures, “Hey, are you Saul?”

Kind of amazing. What facility of mind and memory picks out a fairly normal looking guy in khakis and a windbreaker on a neighborhood street in south Minneapolis and IDs him as the star of a TV show set in New Mexico?

“Does it ever get annoying?” I ask.

Odenkirk was heading to Chicago after Minneapolis to meet up with an old improv buddy, his 17-year­-old son (who’s something of a champion debater), and, you gotta love this, to sing “Take Me Out to the Ballgame” at Wrigley Field. (Odenkirk grew up in Naperville, Illinois.)

“My big concern after talking to all these people is doing right by David’s story,” he said. “Inevitably people who know the whole thing are disappointed by adaptations. Six 42-­minute episodes sounds like a lot, but it isn’t. You have to adjust a lot of things, places, characters, incidents to make it work. But we have a better shot at it then if it was a 100-­minute movie, which was our plan originally.”

And the toilet paper dispenser story?

As Nagle tells it, Tam’s East Garden, like McCready’s down the block, wasn’t exactly The Bachelor Farmer in terms of either cuisine or cleanliness.

“In fact,” he says, “the sheet metal toilet paper dispenser in Tams men’s room was used so often for [cutting up and snorting lines of cocaine] you could, I swear to god, go in and scrape the top of it or wet your finger and get high off the residue. Wild. And then there’d be two pairs of legs, men and women, in every stall. Not every night, you understand. But often enough.”

Odenkirk has plenty to play with.