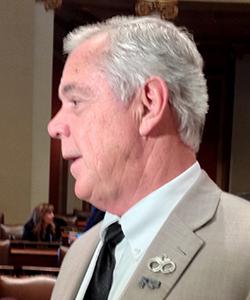 Judging by the responses, most — most — readers of GOP Rep. ​Tony Cornish’s letter​ to the Strib Wednesday rolled their eyes at his list of suggestions for how people who are subject to the use of force by police (presumably black people, given his reference to advocacy groups) might improve their chances of avoiding confrontations with the police. Cornish was a police officer for half a decade 30-some years ago and no doubt thought he was imparting hard­-earned street wisdom based on his experience in rural Minnesota.

Except that it hasn’t played that way, with most people. The Minnesota Legislature’s foremost champion of Second Amendment rights has taken a pillorying in the Strib and elsewhere for the stark dog-whistle quality of his letter, beginning with the never-misunderstood use of “thug,” as in how not to appear to cops.

For example, a letter published this morning from Ian Wolfe of Minneapolis says, “If he were writing to criminals, he would be right. However, he misses the point of criticizing racist structures. Movements against, or criticisms of, racist structures are not a criminal endeavor. People who are criticizing are not advocating for criminals; they are advocating for people who are being treated like criminals. It is one thing to say ‘don’t do a crime.’ It is another to be externally labeled as a criminal because of appearance. I believe Cornish may benefit from some empathy and experience. His self­-proclaimed ‘dirt­-poor’ upbringing still had the privilege of whiteness. So to say to someone ‘I did it, what is your problem?’ is to first disregard issues of race and privilege and also to disregard the opinion that you have even ‘made it.’ Given Cornish’s poor viewpoint and logic, I am inclined to think we ought to at least require some college for politicians, at the very least some classes in logic.”

Others … some … have Cornish’s back. “I applaud Cornish on his letter,” says Dana Isaacson of Bloomington, “We finally have someone not willing to sugarcoat the issues and have a common­sense approach on what our officers have to deal with on a daily basis. I assume that Tony is one of the thinking conservatives, and perhaps a run for governor should be in his future.”

Cornish’s “thinking” aside for a moment, the media point to be made, or defended, is the Strib’s decision not just to run Cornish’s letter but give it top­-of-­the-­letters placement, with a graphic no less, to draw even more reader eyeballs.

KMSP-­TV ​covered the flap​ over Cornish and collected a handful of reader reactions from various on­line venues.

Among them are these:

I was going to say that Tony Cornish’s strib write­up was too gd racist for a newspaper, but Opinion Section, We’ll Print Whatever™ —  Taylor  (@_taylor_) ​June 8, 2016

i can’t believe mpls’ own​​ @StarTribune​ would insinuate police brutality is my fault due to stereotypes. so demeaning​​pic.twitter.com/CgblC7pQxi — ●●● (@HenryJStuart)​​ June 8, 2016

Unbelievably poor judgement from both ​​@StarTribune ​and Rep. Cornish. Shame on them both. https://t.co/ZPttcOEKqQ — Nick Harper (@nharpermn)​​ June 8, 2016

its dope how your paper can publish racist screeds as long as theyre written by your readers ​​@StarTribune pic.twitter.com/Oc7eNRIORt — Myles Brown (@mdotbrown) ​​June 8, 2016

As a daily reader of the​​ @StarTribune​ I am embarrassed and appalled that this ignorant crap was actually printed https://t.co/J1hbQ1QzSB — ECID (@ECIDfitb)​​ June 8, 2016

Again, my suspicion is that this represents a small percentage of the crowd following the Cornish matter. But it’s worth noting and worth saying that the Strib does reader­citizens appalled by the thought processes (or lack thereof) of people like Tony Cornish ​a favor by printing letters like his.

For ​ThinkProgress, Aaron Rupar​, familiar to (some) readers for his former work with City Pages, contacted the Strib’s man in charge of letters, David Banks, for an explanation of why something like Cornish wrote gets printed in a big-city daily.

Whatever one may think of the Cornish letter, it reflects a point [of] view that is shared by a proportion of the people who write to us. Cornish’s leadership role is a factor, too — one I believe is especially pertinent for those who may disagree with his stance. Whether one is trying to develop a point of view or defend an existing one, isn’t it better to be aware of all of the sentiments that may influence public policy?

We fully anticipate publishing responses to the Cornish letter in the coming days. As always, our intent is to facilitate a full debate.

Facilitating a full debate should be obvious to anyone with a grasp of the essential qualities of a democracy, especially in the context of Cornish’s “leadership role” (i.e. he’s an elected public official). Big public news organization should, as a part of their civic responsibilities, facilitate a full debate. Too much “debate” in today’s highly fragmented media is siloed, with partisans raging amongst themselves with little or no exposure to (or risk of) contradiction.

Cornish’s kind of thinking informs decisions he makes routinely in the Legislature. Therefore, since more information is better than less, it is far better that his thoughts on minorities in conflict with police — a serious, potent topic — gets as much visibility as possible so the court of public opinion has an opportunity to judge the merits of his argument.

And as I say, that judgment pretty clearly is not running in Cornish’s favor.

In an ideal media environment, every major news outlet would have a public forum like a newspaper’s letters/opinion pages. Sadly, local television news finds every excuse imaginable to avoid potentially “divisive” topics and the rare radio news operation trading in actual news, as opposed to partisan hysteria­mongering, demonstrates only limited interest in the kind of free­wheeling vox populi that draws in “leaders” like Cornish.

What Cornish wrote, retrograde white paternalism to “most,” was not like shouting “fire” in a crowded theater. What it was was the specific-­to-­peculiar view of a career government employee that doubtlessly represents the thinking of hundreds if not thousands of other Minnesotans, some also perhaps in “leadership roles.”

The publication of his thinking, with responses across all forms of social as well as in the Strib, might … might … give some of them reason to re-evaluate their thinking on minority/police interaction, or more likely, avoid being caught saying anything similar out in public.