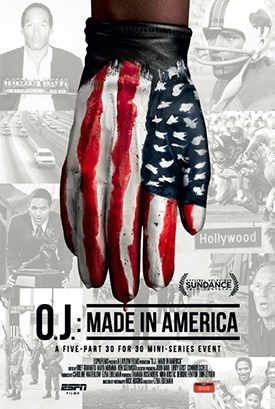 Sunday night, the TV industry hands out another parcel of the 6,000 awards it bestows on itself each year. Hosted by Jimmy Kimmel, who is also a nominee, although not for pre­-loosening Hillary Clinton’s pickle jar, the show will likely feature a lot of speeches from the casts of “Game of Thrones,” “Veep” and the FX series, “The People vs. O.J. Simpson.” But viewers will not hear anything from the folks involved with the season’s best production.

That’s because ESPN’s nearly-eight-hour documentary, “O.J.: Made in America,” premiered several days after the window for this year’s nominations closed on June 1. The series, directed by Ezra Edelman, is — in my humble opinion — the single thickest, richest, most illuminating slice of American culture that television has ever produced.

Watching it was anything but a float down a creek of morbid nostalgia. Rather, our present moment here in the fall of 2016 was constantly evident as the series interwove:

Without dropping a mallet on his viewers’ heads, Edelman makes the unmistakable connection between the facets of American society that acquitted a folk hero for a vicious double murder and hasn’t come close to correcting those failings in the two decades since.

It was simply the best thing on TV this year … except that for Emmy purposes it’ll have to pick up its award in 2017. (And because it ran in a few theaters in May “O.J. Simpson: Made in America” is expected to be nominated for an Academy Award in January.) Likewise, HBO’s excellent, Richard Price­-written “The Night of” falls into next year’s awards. That said, and as much as I prefer to avoid cliches, permit me to make a few predictions with comments on other big awards.

There’s a lot of chatter that “Mr. Robot” or “The Americans” will beat out “Game of Thrones” this year. I came to “The Americans” late, but have been impressed that creator Joe Weisberg, who briefly worked for the CIA, has kept the tale of two Russian spies living in Ronald Reagan’s D.C. suburbia, in the realm of plausibility as well as he has. When the two characters, Philip and Elizabeth (played by Matthew Rhys and Keri Russell, who are a couple in real life and are nominated for their lead roles), have time to sleep, much less run a travel agency, I’ll never know. But the whole “Americans” team has sustained a potentially gimmicky concept far longer than I expected. Also, being a fan of everything “Breaking Bad” and Bob “Saul Goodman” Odenkirk-related, I’d like to see either the show or him win. But I suspect Odenkirk’s peers, like most fans, are anticipating bigger and better things once his Jimmy makes the full transition to Saul. If I had a vote, I’d still go for “Game of Thrones,” if for no other reason than the production values — it’s visual impact — continues to be every bit as imaginative and delightful as any Hollywood comic book epic. (“The Battle of the Bastards” being a particular example.)

The betting favorite here is “Veep,” again. There isn’t a person in the country who doesn’t like Julia Louis­Dreyfus, and the show’s droll tone toward a know-nothing in proximity to the White House plays with a special undertow in this campaign season. I tend to agree with those who think Tina Fey’s “The Unbreakable Kimmy Schmidt” is too weird not only for rural America but the average Emmy member as well. But if that’s the case they ought to create a category for “Outstanding Attempt to Do Something Different, Damn It.” Also, the steady lampooning of the tech world’s sanctimonious hustlers on “Silicon Valley” is really … really … entertaining.

LEAD ACTOR IN A DRAMA

Here again, “Mr. Robot” and Rami Malek are getting a lot of buzz, with more than usual attention being paid to Matthew Rhys for “The Americans.”  With apologies to them and Odenkirk though, I’m still a sucker for Kevin Spacey. Few actors can chew scenery with such verve and relish and still keep their audience cheering them on to even higher levels of hamminess. The guy’s just flat-out fun to watch. Also, the show itself recovered from a lame third season by restoring Frank and Claire Underwood to the rapacious villainy we admire in our (fictional) leaders. (In a development that could be good or bad, Netflix fired Beau Willimon, the show-runner for the first four seasons of “House of Cards,” apparently after he objected to notes he was getting from execs.)

LEAD ACTRESS IN A DRAMA

Everything here points to a repeat for Viola Davis. (In contrast to the Oscars, 21 black actors are nominated in various Emmy categories.) People tell me I have to give “Homeland” and Claire Danes another chance. But after the season where, post electroshock therapy, she was promoted to CIA station chief and then holed up in safe house having sex with a terrorist’s teenage son … I haven’t been back.

There’s no question that “The People vs. O.J. Simpson” will win. It could so easily have been a cheesy exploitation flick, but based on Jeffrey Toobin’s book and stocked a terrific cast — even John Travolta as Robert Shapiro — it became an unusually perceptive drama. Particularly good was Sarah Paulson as Marcia Clark. That said, I thoroughly enjoyed AMC’s “The Night Manager,” which was essentially an audition film for the next iteration of James Bond, with both Tom Hiddleston and director Susanne Bier (yes, a woman!), under serious consideration to take over the next 007 feature. And gorgeous location work on Majorca.

The “hot” one at the moment is James Corden. When you get Adele and Michelle Obama to play “Carpool Karaoke” with you, you’re on to something. But being both aged and (really) cranky — and having had it about up to here with a certain orange­haired fraud polluting our national reputation — I remain partial to both Bill Maher and John Oliver, with the tie­breaker going to Bill for, as The Donald’s people are often quoted, “saying things no one else dares to say.”