If you’re a regular reader of media coverage, you’re undoubtedly familiar with the pandemic’s effect on newspapers and print advertising revenue. If not, let me catch you up: It hasn’t been good. The number newspaper closures and jobs lost nationally is as grim as it gets. 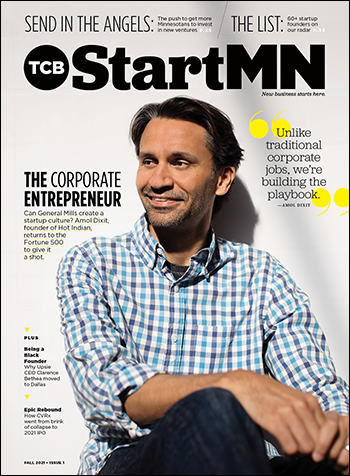 But magazines, the kind you used to buy at newsstands (remember them?), are a different story. Some glossy magazines actually saw circulation and subscriber gains in the last 19 months, as folks in quarantine or working from home suddenly took an interest in things besides Netflix.

Condé Nast, which publishes The New Yorker and Vanity Fair, reported that the number of new subscribers in the U.S. doubled in March and April 2020, compared to the same period the year before, according to BuzzFeed. Samir Husni, a journalism professor at the University of Mississippi who is known as “Mr. Magazine,” reported 60 new magazines launched in the U.S. in 2020, 45 in the second half of the year. That’s a lot fewer than 2019, but still significant given the shaky state of the publishing industry.

Which brings us to local business magazine Twin Cities Business (TCB), which is published by MSP Communications. Last month, it jumped into the fray by launching StartMN, a glossy 48-pager that focuses on Minnesota startup businesses and entrepreneurship. TCB’s 30,000 subscribers received a free copy with their October/November issue in the mail last week.

That’s right: a start-up about start-ups. In print. (Before we continue, let’s get the disclosures out of the way. TCB and MinnPost have a content sharing partnership agreement, and I’m an occasional TCB contributor.)

The magazine idea grew from TCB’s By All Means podcast, hosted by editor-in-chief Allison Kaplan, that focuses on entrepreneurship and leadership. Kaplan’s conversations with innovators and startup founders suggested there might be an audience for a similar print product.

“I personally am fascinated by entrepreneurship and start-up culture and people who really go for it,” Kaplan said. “I think we have a lot of amazing success stories in this market, so we’re been telling those stories increasingly in the magazine and on the podcast.

“It seemed like there was an opportunity to go even deeper and perhaps reach an audience that was not already reading Twin Cities Business, or perceive it as being for them. I think there’s a whole generation of people who are interested in business who are taking a very different approach. We want to make sure we’re there for them, and be the connector.”

Funding came from seven charter sponsors and additional advertisers. “We were really pleased with the amount of interest,” Kaplan said.

TCB staffers and contributors produced the issue. Kaplan wrote the cover story about Amol Dixit, a former General Mills executive who launched Hot Indian fast casual restaurants at the Midtown Global Market and the Mall of America. He recently returned to General Mills to run its entrepreneurial division.

But why print? Digital is the cheaper and safer way to go — you avoid printing and distribution costs — and TCB already offers individual stories on the TCB web site (under the StartMN tab), plus an e-newsletter.

Kaplan says print still has the power to make things seem more “real,” and is banking on the notion that being in a magazine still holds allure for the startup crowd.

“At MSP Communications, we’re still great believers in the power of print,” Kaplan said. “I think you see it when somebody, whether a CEO or a new founder, when they’re in the magazine, there’s something exciting about it that’s not replicated by just being online. It’s nice to have something glossy and in-depth that you can really sink your teeth into, that you can pass around.”

Though StartMN isn’t available yet as a standalone product — you’ve got to subscribe to TCB to get it — they distributed copies last month during Twin Cities Startup Week. Kaplan said they offered complimentary TCB subscriptions during the event and signed up nearly 1,000 new subscribers, suggesting there’s an audience there. Kaplan plans to publish two issues of StartMN next year, spring and fall, then see if the market demands more.

“We’re not trying to replicate or replace anything that already exists,” Kaplan said. “We think there’s an opportunity to go deeper and do more and tell stories that are going to connect the entrepreneurial community and the broader business community. That’s why the first issue, the theme of it is the ecosystem, what makes this market a great place for startups.”