The weeks and days leading up to the 2008 passage of the Paul Wellstone and Pete Domenici Mental Health Parity and Addiction Equity Act had all the elements of a perfect storm: Key players in the House – U.S. Reps. Jim Ramstad, R-Minn., and Patrick Kennedy, D-R.I. – were preparing to retire. In the Senate, sponsor Pete Domenici, R-N.M., was also about to retire, and co-sponsor Sen. Ted Kennedy, D-Mass., had been diagnosed with an aggressive brain tumor.

All had worked hard to keep parity legislation alive in the wake of the 2002 plane crash that killed U.S. Sen. Paul Wellstone. The clock was ticking as Congress pushed to end the session, with a domestic and global financial meltdown dominating the agenda.

“The time was truly now or never to get parity passed,” said David Wellstone, son of the late senator, who had taken up the cause after his father’s death. As it turned out, the “must-pass” bill to rescue the tanking financial-services sector became the vehicle by which the parity bill cleared both chambers. President George W. Bush signed the bill into law, but it wasn’t until last Friday, five years after its passage, that the Treasury, Labor, and Health and Human Services departments issued their final rules for implementation.

David Wellstone was among several Minnesotans who became influential drivers in the decades-long battle to ensure greater access to care for those with mental-health and substance-abuse disorders. Here are some highlights from their experiences on the advocacy trail:

To this day, Peterson remains quite moved by the personal stories of those willing to come forward and testify before Congress. As Ramstad’s chief of staff, he was responsible for (among many other things) helping to identify witnesses and getting them to Capitol Hill. Some who come to mind include former first lady Betty Ford and singer-songwriter Shawn Colvin.

“I am here to serve you as someone who suffers from alcoholism and has managed to stay sober for 15 years,” Colvin told a Senate subcommittee hearing in March of 1998. “The more we can make people aware that one does not need to be ashamed, that one is sick, the more we can help people find areas of treatment, and make that treatment available to them as many times as they need it, then I think we will be putting the world in a better place.”

To fast-forward: Peterson was at the Carter Center in Atlanta, Ga., Friday for the 29th Annual Rosalynn Carter Symposium on Mental Health Policy when the final rules of enactment were announced. “I walked through the Carter Library, where I’d never been, and it hit me – the full reality that the two presidents [Jimmy Carter and Gerald Ford] had run against one another in ’76. To watch the wives of the former foes band together behind this hugely important issue is a real tribute to them personally and to bipartisanship.”

Of Rosalynn Carter, Peterson said: “This is the capstone of a 35-year effort on her part.”

Moyers hit the ground running as a public policy specialist, appearing on Capitol Hill to advocate for parity his first day on the job in February of 1996. He, too, remembers the 1998 hearing at which Shawn Colvin testified. Also on the witness list that day were astronaut Buzz Aldrin, actor Carroll O’Connor, actress Mackenzie Phillips, Betty Ford Center President John Schwarzlose, PBS host Bill Moyers (William’s dad), and William himself.

“I remember sitting there, thinking to myself, is it possible that I’ve gone from being a hopeless addict to being a public advocate for others just like me? How has this happened?” In the same moment, he said he realized, “However this happened, it really is my vocation to make sure it happens for others, too.”

Fueling his resolve to this very day are Wellstone’s final words to him. “He was in my kitchen in St. Paul, and he was on his way out the door,” Moyers said. “And he said, ‘You know, we’re going to get that parity bill passed.’ And he said it with that spirited conviction that was the exclamation point to so much of Paul’s policy passion.” It was a bright fall day in September 2002. Moyers never saw Wellstone again.

Westin was reeling from the death of her 20-year-old daughter, Anna, who had killed herself in 2000 after extended struggles with anorexia and difficulty getting the care she needed. She was determined to channel her grief into something useful – into making sure that others with mental health and substance use disorders would not have the same problems with getting care. She knew that the sunset provisions of a 1996 parity law were about to kick in, so she contacted a handful of other concerned people, booked a meeting spot in Bloomington, Minn., and boldly invited a U.S. senator to join them. 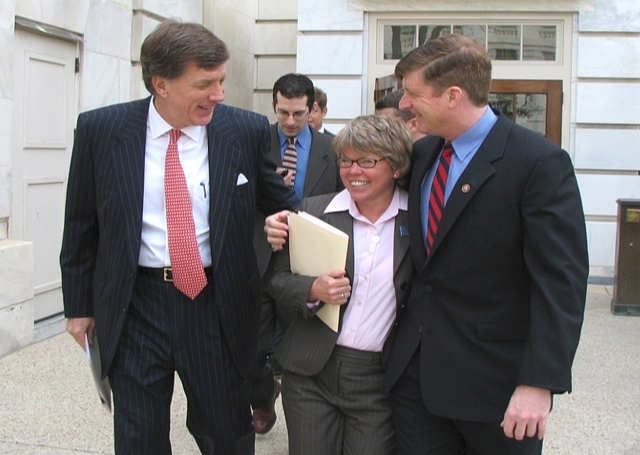 Courtesy of Jim Ramstad’s officeKitty Westin, center, with Reps. Jim Ramstad and Patrick Kennedy during her many trips to Washington, D.C.

Much to her surprise, both Paul and Sheila Wellstone showed up. “You’re doing the right thing!” Paul Wellstone told her. “You need to bring 1 million angry moms to Washington, and tell your story.”

She didn’t bring 1 million, she says almost apologetically, but she brought hundreds. “We can’t bring Anna back, but we know some good can come of this – people are going to live because of this.”

David Wellstone, co-founder of Wellstone Action and author of “Becoming Wellstone: Healing from Tragedy and Carrying on My Father’s Legacy”:

His mouth was dry, he had five minutes to talk, and the timer was ticking. It was just another congressional hearing among countless many at which Wellstone had made a vigorous plea for parity (a skill he comes by rightly). But this one (in July of 2007) was memorable because fellow witness and former first lady Rosalynn Carter was seated right next to him.

“If I had a hero, she would be it,” Wellstone said. Over the many years of pushing for passage of the parity bill, and then pressing further for its implementation, Wellstone said he rode constant highs and lows – one day convinced that the whole effort had been for naught, the next day pounding it back to life. Would addiction get dropped from the effort? Would the scope of services be narrowed? He knew he had pushed too hard sometimes, and stepped on people’s toes.

In his darkest moments, “when even the people who supported this had given up,” he would reach into his pocket and pull out a photo of Anna Westin. “And I would just say to myself: Can’t give up. Can’t quit.”

If you can’t take Minnesotans to the Hill, then bring the Hill to Minnesota. That was Abderholden’s vision when, with Ramstad’s guidance, she convened a congressional hearing at the Humphrey Institute in January 2007. On the agenda were Ramstad and fellow Congress members Patrick Kennedy, Betty McCollum, Keith Ellison and Amy Klobuchar. Experts in psychiatry, suicide and addiction spoke, as did national NAMI board member and state Rep. Mindy Greiling, DFL-Roseville, who told of the stops and starts in her son’s treatment for schizophrenia.

Abderholden herself, whose family members had struggled with mental-health disorders, got something off her chest: “We simply cannot and will not wait any longer. We are in fact rising up in anger and sympathy. Pass parity now.” Also at the hearing were representatives of the insurance industry, the identified “bad guys” in the debate.

Not so fast. “I am proud to work in a state that passed parity legislation for behavioral health a number of years ago,” said Medica executive Glenn Andis at the hearing. “The good news is that from many aspects it has worked quite well. Despite fears of increased costs, I believe it has not resulted in higher total health-care costs while increasing access to services and improving health-care outcomes.”

Ramstad is both a diplomat and a political realist. And consequently he’s more appreciative than sentimental about the political twists and turns that transformed his vision for parity into reality. One powerful moment was when Democratic Sen. Ted Kennedy reached across the aisle to let Ramstad know that he was in – that he wanted to carry forward Paul Wellstone’s legacy. Their bills were quite different, but their goals were shared. It was a start. 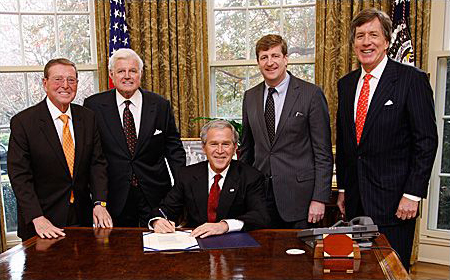 Another moment was when the bill at last came up for a vote in the “extra innings” of the 2008 session.

“I’ll never forget the collective look in the press gallery,” Ramstad said, “when [Senate Majority] Leader Harry Reid called up the $700 billion financial bailout bill as an amendment to the parity bill. That was a moment to remember.”

Ramstad can’t count the number of times he poked at Reid to bring up parity for a vote in the Senate. In turn, Reid would tell him, “If you keep coming, I won’t. If you quit coming, I will.” One thing you will never hear in Ramstad’s recounting of the parity battle is anything bordering on self-congratulations. “It was an incredible team effort,” he says.