But he also understands how empowering and freeing it was one day when, instead of saying, “Hi, I’m Greg, and I’m an addict,” he began to say: “My name is Greg Williams, and I’m a person in long-term recovery. And for me that means I haven’t used drugs or alcohol since I was 17. Recovery has really given me the gift of a new life.”

Williams, 30, of Danbury, Conn., has harnessed that freethinking, nonconformist energy into “The Anonymous People,” a documentary film that has been making its way across the United States — one community at a time. Its central subject is the growing Faces & Voices of Recovery movement, one that has its roots in St. Paul.

Until now, screenings of the documentary have depended on meeting pre-sold ticket quotas at available venues. But soon it will be showing up in theaters. And for one 24-hour period – from Friday at midnight to Saturday at midnight – anyone anywhere is welcome to watch for free by signing on to Hazelden Betty Ford Foundation’s social media website. (In “joining,” you can be as anonymous as you want.)

Williams and others who are featured in the film, including William Moyers of Hazelden Betty Ford, will host a live online chat starting at 4 p.m. Saturday.

One voice after another

The film was shot in prisons, statehouses, town hall forums, high school gymnasiums and recovery centers across the United States. Some of the interview subjects are well known to us. They include actress Kristen Johnston, former U.S. Reps. Patrick Kennedy and Jim Ramstad, former Miss U.S.A. Tara Conner and former NBA star Chris Herren. All in recovery. 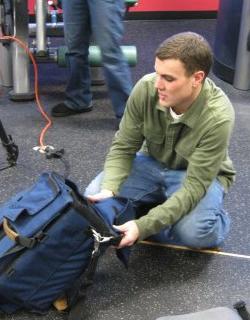 Others are among the many millions of nameless people whose lives also have been completely altered by the disease of addiction. One is a mother whose son died of an overdose and who somehow manages to keep talking even as she weeps. Another is a woman whose “dirty urine” test results have finally landed her in prison.

Where are the “services” for people like her? wonders John Shinholser, president and founder of the McShin Foundation (who lands the film’s best lines). If you get busted for shoplifting from Home Depot, “you’re going to get services immediately.”

There are no pyrotechnics or cinematic sleights of hand, but the film creates a cumulative sense of hope and expectation as one voice is added to another and another and as thousands rally for annual Recovery Walks! events with buttons and posters that say, “I’m in recovery and I vote” and “Recovery is everywhere.” No one is trying to hide addiction’s toll, however, and there are plenty who bear the images and names of lost loved ones on their T-shirts.

Williams says he wants everyone “out of the shadows” and back into communities where they belong, stretching their recoveries by helping others, unmasking themselves and reclaiming their citizenship.

“Most people in recovery are citizens who give money to heart disease, to cancer research; they vote, they elect people,” he said. “And most people haven’t been empowered to do that for a cause that is nearest and dearest to their hearts — to donate towards recovery, to elect politicians who will support recovery solutions, to stand up at the State Capitol and join in on Recovery Day.”

As a metaphor, the documentary (indeed, the movement) borrows from the work of Don Coyhis, founder of White Bison Inc. in Colorado Springs, Colo., who has said: “In the forest, you have the alcoholic trees, the co-dependent trees, all the other kinds. But you have to work on the roots. If you only treat the trees, your forest won’t last.”

As Williams mined the archives for a deeper understanding of Alcoholics Anonymous and to explore the founders’ original intent surrounding anonymity, he found that his mission to “put a face on recovery” was not all that new.

Here were Buzz Aldrin, Dick Van Dyke and U.S. Sen. Harold Hughes of Iowa, among others — all beseeching their fellow travelers to step up and tell their stories.

“If you want to sit in a meeting and get up and say to one another, ‘I’m a happy recovering alcoholic,’ you go right ahead,” Hughes tells a group in Washington, D.C., in the 1970s.  “I want you to do more than that. Go in there and do that, but then get out there on the battlefield if you are so led. And tell America you got well. If you can’t, then at least pray for us. If you think we’re wrong, then cuss us. But don’t just sit idly aside.” 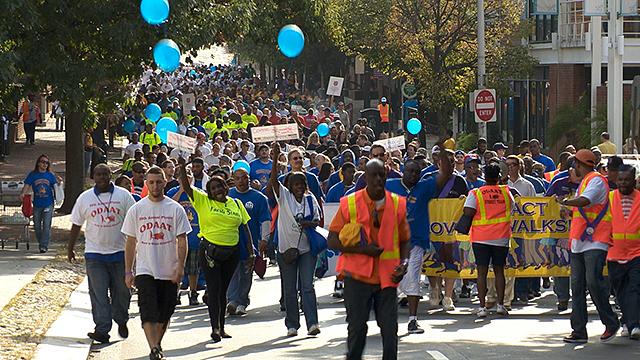 Courtesy of “The Anonymous People”
The annual Recovery Walk in Philadelphia in 2012, an event that now draws 20,000.

Williams was amazed by their efforts, which were truncated by the War on Drugs and Just Say No and zero-tolerance campaigns — efforts that have shame as their legacy, he said.

“I’m a person in recovery who didn’t speak about my recovery for the first five years of my recovery,” he said. “When you peel back the layers of the onion, it really is less about anonymity and more about secrecy and shame — not necessarily because people are ashamed, but because society is ashamed of people like me.”

He’s happy to pick up the torch from Hughes and his contemporaries, Williams said.