Golden Valley City Council members convened Tuesday night, expecting to take up the “findings and determinations” that would validate a Feb. 5 vote against a conditional use permit for a day treatment center for mentally ill schoolchildren. Instead, they voted to rescind their original (3-2) “no” vote.

The mayor and council members each took a turn up front to express (variously and alternately) their anger, frustration, sorrow, disappointment, resentment, surprise and regret over the discussion that preceded the vote and the fallout since.

“I apologize about how this was started,” said Mayor Shep Harris. “I as mayor should have spoken from the beginning. I was uncomfortable by some comments that were made, and I should have spoken out immediately and said, ‘Folks, there are some concerns that are being stated here. They’re legitimate concerns. But we need to be sensitive to what we are saying and how we say it.’”

Harris assigned blame not only to himself but all the way around: to neighborhood residents for their heated remarks about mentally ill children; to LifeSpan and Fundus Praedium (the care provider and developer seeking the permit) for not responding to a mayoral overture to have an “educated dialogue” (after the “no” vote); to NAMI Minnesota for “demonizing” the city in a Feb. 8 press conference; to “the media” for “distorting” all of the above; and to newspaper readers for posting “hateful” comments that bordered on “anti-Semitic” and “discriminatory.”

The worst, and the best, of us

“I believe that everyone bears some responsibility,” Harris said. “I’m not trying to make light of this situation, but it reminds me of a Spike Lee movie called ‘Do the Right Thing,’ [which] showed the worst in us as people. The stereotypes that came out were awful. … And I think, unfortunately, this situation in some cases has shown the worst of us.”

Harris also sought to reaffirm and restore humanity to his colleagues, his city and the people of Golden Valley.

“I truly believe that comments that were made by some of the neighbors opposed to this proposal were not meant to be derogatory [or] discriminatory,” he said, though they came off as “offensive and insensitive.” Further, he said, “I do believe [that], despite what has happened in the media, Golden Valley is a welcoming community. It’s a safe community. It’s a progressive community.”

Two other council members who voted against the conditional use permit, in a mixed-use building in a residential neighborhood at 345 Pennsylvania Ave. S., struggled to adequately convey their personal and professional internal conflicts over the issue.

“This has been a very hard few weeks, without a doubt — emotional, to say the least,” said Council Member Joanie Clausen. “It has been a time of soul-searching, it has been very sad, and many questions have been raised without answers. For me, I know I’m a good person. I’m compassionate, loving, honest, loyal, and I care about others. As are the neighbors in the area of Pennsylvania [Avenue]. Our city is a great community, in spite of what others may have said about us. I also know that every single council member and staff member sitting up here tonight is conscientious, caring and thoughtful. I have not been immune from the same struggles and issues we have discussed over the past two weeks. … No matter the difference, communication is the basis for understanding and finding meaningful answers.”

Said Larry Fonnest: “As an elected member of this council, I view my first duty as to ensure the health and safety and welfare of the city and its citizens. And, given the facts, that were presented on the 5th, I felt that I had no choice but to vote no. It did not come easy. I hope that as we as a community, as a city government, move forward, we will learn from this experience. There is much to be learned. And I hope that we as a community will pull together and heal and that we will be thoughtful as we move forward on this whole issue of mental illness and young people and how we as a community can help support their community.”

The two members who voted to approve the conditional use permit reiterated their commitment and support for LifeSpan, which provides group and cognitive and behavioral therapies to school-age children with diagnoses ranging from depression and bipolar disorder to ADHD and anxiety.

The council was to have voted Tuesday night on six “findings and determinations”:

Said Council Member Andy Snope. “I think these findings were not findings of fact but findings of fear. And I’m very disappointed to hear that the applicant does not want to be located in Golden Valley. We are a community that promotes a … nourishing and safe and respectful and welcoming environment. Unfortunately, the best of us was not showing on the 5th. Two weeks ago, we were considering the conditional use permit for Lifespan. I thought we were going to have a normal conversation about conditional use permit: materials of the building, the landscaping, the parking spaces, the increased traffic. I never thought it was going to be a debate about the fear of treating mental illness, and I’m very disappointed in the testimony that I heard on that.”

Instead, after prolonged debate over fines points on procedures and the rule of law, council members delayed any action on the findings — for now — rescinded their earlier vote, and directed staff to reach out to the developer and make a communications plan with the help of a “neutral,” third-party expert on mental health issues who could facilitate “respectful” dialogue between the residents and LifeSpan.

“At this point, I’d like to see this to be a teachable moment …,” Harris said. “Our community has been damaged. I think we need to learn more, but we also need to heal. And so I …  suggest that we consider the opportunity to tap into our Human Rights Commission and see if they can assist us in working with the community.”

Traci Hackmann, president and CEO of Lifespan, was at the meeting but at somewhat of a disadvantage, because she could not speak for her landlord and developer, who was not present and who had earlier made clear his unwillingness to draw out the process.

“I’m still open, but it’s not my decision to make,” she told the council. “This is still a good location. It has lots of benefits.”

No intent to ‘downplay’

In an interview before the meeting, Hackmann, who operates two other day treatment facilities — one in Burnsville and one in Shoreview — and has been providing services more than for 20 years, said she had been blindsided by the sharp turn in sentiments at the Feb. 5 council meeting, where it was suggested that they had “sugarcoated” the status of her clients and their needs. 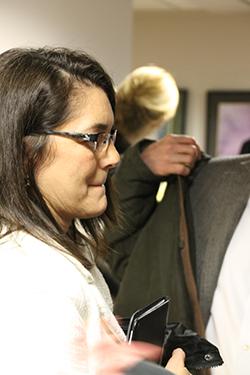 “There was no intent to ‘downplay,’” she said. “At the same time, you get into a meeting where people are saying outrageous things, and they’re using our language about our children, and they’re saying it in an outrageous way. We don’t think of our kids as outrageous. We know they have high-level needs, but we also know how to support and manage them in the structure and the programming we provide. That’s why we do this. That’s our job. And we’re very good at it.”

“For some of our kids, a bad day can be really bad — or really angry or really disappointed. But if they have a really bad day, and they’re worried that they might have said a thing or two to one of the therapists that they just think that it’s all over now, that they can never show their face again, right? They come back the next day and try it again. There’s nothing that they’re going to do on Day 1 that can’t be worked on Day 2 or Day 3 or Day 4. That’s kind of the thing about coming back. It’s a safe place to do this. … It’s going to be all right. There’s nothing you’re going to do that’s going to create a situation where you don’t get to come back and try again and keep working.”

“I know how resourceful and intelligent and capable all of these kids are,” Hackmann said. “And it’s really fun to be around them and treat them ‘as if’ — help them to understand that you still get to laugh at a joke, that there’s still humor, there’s still joy, you’re still a likeable person, you can still have friends … and find a safe place to wander through this stuff. I kind of tease when a kid comes, and they’re not motivated by their mental illness, and then they’ll say, ‘Oh, this is great, I just want to stay here. Can I graduate from here?’ And I just usually joke and say, ‘Well, when a kid wants to be here, it’s time for them to go.’ Because they’ve internalized the value of what they have, and they can take it with them when they go.”

One parent credits LifeSpan with her daughter’s relative good health these days, and her plans to attend college.

Anne Klein, of Pine City, Minn., said her 15-year-old daughter, Betsy, “lives with a host of mental illnesses, including ADHD, mood disorder, bipolar disorder, obsessive compulsive disorder, anxiety and Asperger’s syndrome.” Her symptoms were unrelieved, she said, until she began attending Lifespan in the eighth grade. Betsy and her family began to notice that her coping skills, including managing anxiety attacks and anger improved enough so that she could return to her studies. Her descents into her “bad place” were less frequent and shorter in duration.

“The reality is that you’re at higher risk going and getting gas at the gas station than you are at LifeSpan,” Klein said. “Our daughter has never been violent. And we would never have put her in a place that would have put her at risk.”

Sue Abderholden, executive director of NAMI Minnesota, said she was “pleased that the council rescinded their vote to allow time for LifeSpan to meet with neighbors and have an opportunity to educate people about mental illnessses in children. Golden Valley has experience with programs that serve people with mental illnesses, and know that they are good neighbors. A little time will help reassure the neighborhood that LifeSpan and the children they serve will not have a negative impact.”