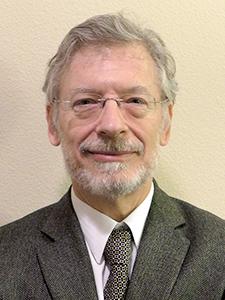 Criticism of Alcoholics Anonymous and Twelve-Step programs is nothing new, but every now and then the widely accepted approach to addiction and recovery gets a fresh whack upside the head.

Re-entering the fray is Lance Dodes, M.D., with “The Sober Truth: Debunking the Bad Science Behind 12-Step Programs and the Rehab Industry” (co-authored with his son, Zachary Dodes, and published by Beacon Press), a book that began generating heated online exchanges a good 48 hours before its official release Tuesday.

“The Sober Truth” elucidates the many flaws and shortcomings in research studies that point to the efficacy of AA and Twelve Steps, including the absence of randomized, clinical trials; the overreliance on self-reporting, and the failure to adjust for “motivational confound” (while those who stay in the program tend to do well in the program, studies don’t account for the people who dropped out).

Dodes also dismisses findings of genetic and neurobiological links to addiction, and does not embrace the “disease” construct. “[N]obody in human history has ever walked into a bar because a gene told them to,” he writes. And the more equine therapy, Reiki massage and outdoor adventures offered at any given rehab center, the more his suspicions are aroused.

By his lights, addiction is a purely psychological disorder, one that is driven by a desire to overcome the feeling of helplessness by “replacing it with its opposite, empowerment.” Therefore, a treatment philosophy that begins with the idea of powerlessness might well work against those it intends to help, he argues. With his approach, “The problem becomes ordinary, no more or less manageable than any psychological problem and can be managed as such” – with psychotherapy.

Some of the criticism carries the suggestion that AA is a form of treatment, Seppala said. But it’s not treatment and doesn’t pretend to be, he said. “It is a mutual help program. People enter, they don’t pay anything, there are no professionals, and they help each other. And research has shown that it is successful in that regard.” 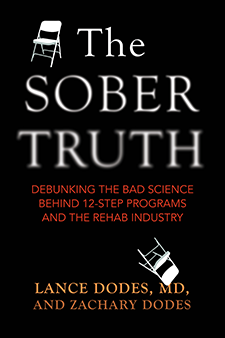 As for Hazelden, he said, “we provide treatment based on the best evidence of what works for addiction, and that includes different psychotherapies, it includes medication, and it includes facilitating people to attend AA in the long run – because addiction is a chronic illness, and disease management systems work for chronic illness.”

AA is not for everybody, Seppala said. People with social anxiety disorder, for example, or those who are agnostic or atheist. There are AA groups designed to accommodate the latter, he said. “They don’t pray, they don’t talk about a higher power, and they use other terminology that works for them. But they support each other, and they still use the steps in their own way.”

He’s baffled by anyone who would reject a neurobiological interpretation of addiction. “These drugs powerfully affect the reward center in ways that reprioritize drive states, so that people are willing to risk and lose their lives just to keep getting high,” he said. “It’s hard to even fathom that. When you’re dealing with people who are really at that stage, where it’s overwhelmingly altering their lives in that manner, it’s hard to say that it’s not a biological illness, that somehow it’s just a behavioral problem that people learn how to do and now somehow choose to do.

“How do you address such powerful drives? You have to [employ] something remarkably powerful as well.”

For some seeking treatment, the prevailing therapies provoke a strong and complicated response.

He’s a longtime Minnesota transplant who experienced the full range of the state’s treatment options over the course of 10 years. He openly expresses his antipathy toward AA culture (as he experienced it) and the Twelve Steps. Even as he criticizes, however, he admits that he contradicts himself.

Chief among his objections is that, contrary to the oft-repeated admonition to “Keep it simple, stupid,” the Twelve Steps are anything but simple, he said.

“You just get engrossed in somebody else’s idea, somebody else’s outline,” he said. “You’re trying to do your homework, and you’re trying to get things done. But there are so many decisions to make, and it becomes a quagmire. … With every step, there are 20 other steps underneath. And you’ve got to take a left turn here, and a right turn there, and there’s an alley you’ve got to go down, and a garage door to open. And it’s just so labyrinthine. You can get lost.”

As well, he simply could not accept the “powerlessness” that is required in Step One. “The idea that you’re helpless and powerless is the beginning of the end,” he said. “You have to get in the driver’s seat. You have to take control. If you don’t, you’re dead.” Even his rabbi cannot accept the idea of “letting go of volition,” he said. 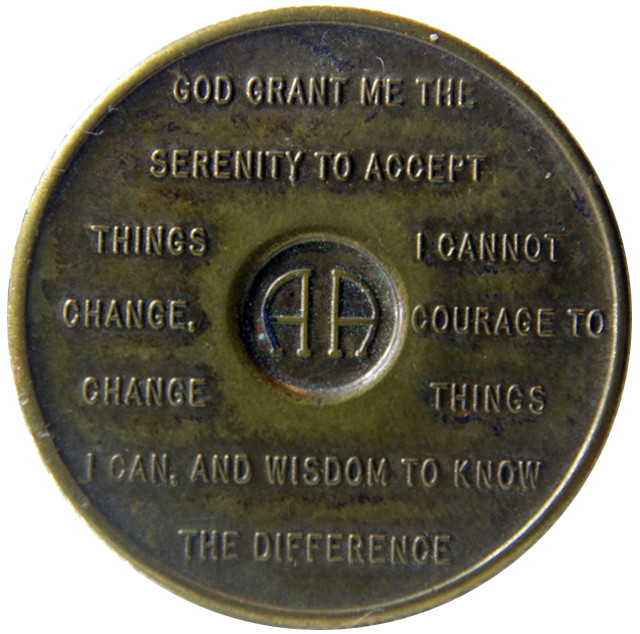 Creative Commons/Yolanda
The Serenity Prayer featured on the back of an Alcoholics Anonymous medallion.

The general climate inside AA meetings, which John J. said was true of the hundreds and hundreds of meetings he attended, did not help matters. “Everybody there is pissing and moaning about how their relatives (who are supporting them) are not being nice to them and not understanding, and how their boss is firing them because he didn’t understand their disease.”

His most pointed observations are reserved for the “grumpy old men” standard-bearers. “They’re the only ones who enjoy the meetings because they get to bark at the new people and try to boss them around. They’ve lost their authority on the home front and everywhere else. … and they’re just dry drunks, grouches. And they hate their lives – they hate every moment of their lives – until they get into their meetings, where they can exercise power, and tell you, ‘You’re going to die.’ ”

John J. would also prefer that his “ex-sponsor” not show up at his workplace to “remind the people around me how bad it used to be for me. I’ve moved on.”

All that said, John J. acknowledges that his recovery began at Hazelden Betty Ford Foundation, a treatment program firmly grounded in Twelve Step principles and practices. It was there, he said, that he recovered his physical strength, became enlightened about the physiological effects of addiction and grasped the absolute imperative to set aside his idea of uniqueness. Among his takeaways, in his words:

Whatever drug you’re taking lives in you: The more you subscribe to this substance … it’s physically implanted in your body. And unless you get it out of there, it’s not going to go away. That seems simple on the surface. But it took beating it into my head for me to really comprehend that you are what you eat. I should have learned that in the ’60s, but I didn’t get it because it wasn’t the right time for me to learn it. I had to wait for that lesson to come along. It’s the very first lesson I learned in there [at Hazelden].

You’re not what you think you are: When you are under the influence, including of some of the things that are prescribed by the treatment community, you’re not presenting the way you think you are. Your speech and tone of voice are what you believe to be reasoned. Your sister is looking at you sideways, and asking, “Who … are you?” But you don’t get it then, and you don’t understand afterwards until you make that change. Being in the moment with how you’re presenting is not an obvious thing. You’re delusional, hyper, often hysterical, overdramatic, grandiose – all those things don’t occur to you because, really, what you want is the next pill and the next drink and nothing else is on your list of priorities.

You have to have some humility: You think you’re special. You think you’re different. You think you’re unique. This is something that was impressed upon me as a child: I’m different, I’m special, and I’m one of God’s chosen because I’m an artist. Nobody understands me, and maybe they will after I die. And who cares? That has to go away. You have to have some humility. That aspect of recovery has to occur or you are going to die. … I’m not special. I’m flesh and blood. I’m just like everybody else here. I have something in common. There is something in common here. The only uniqueness you find in art and poetry and literature is the fact that maybe you can resonate because you are the same, not because you are special.

John J. said his long awakening (which cost hundreds of thousands of dollars), continued after he left Hazelden and sought further treatment for mental-health issues at Cedar Ridge in Stillwater, a men’s residential center that he remembers as a “cold encampment … slim on creature comforts.” There he found a dog-eared copy of a self-help book promoting “health realization,” an approach to recovery that teaches how to allow positive self-image and “innate health” to emerge.

“The answer lies in acceptance, not in powerlessness,” he said of his epiphany. “It’s one step, not 12.”

These days, John J. avoids getting involved in other people’s recovery dramas (“it destroys relationships”), and he gives back by working with seniors.

“And that’s what gives me the most joy of anything,” he said. “I used to be very, very object-based with success. … [My new spouse] has taught me it’s more about who you are in the moment.”

AA and the Twelve Steps come in for another drubbing