A tearful mother, one of several who testified at a State Capitol press conference Wednesday to make an impassioned plea for a medical marijuana law, said that Gov. Mark Dayton had earlier suggested to her and others that they obtain the drug illegally. 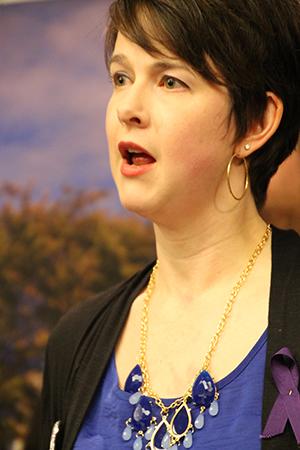 Jessica Hauser, of Woodbury, said the suggestion came during a private meeting March 13 at the governor’s mansion with family members and others advocating for the legalization of medical marijuana.

“I was incredibly hopeful when Governor Dayton invited me into his home a couple of weeks ago,” said Hauser, whose son Wyatt has infantile spasms, a form of epilepsy that she said causes her child to have hundreds of seizures per day. She said Wyatt has tried 10 epileptic medications and a specialized diet, with no success, and is not a candidate for surgery.

“So I explained to [the governor] how my son and others like him would benefit from safe and legal access to medical marijuana. I told him in great detail our story and our struggles. My optimism quickly turned to dismay when, after hearing my son’s story, the governor actually suggested I should just find medical marijuana for my son off the street.

“This is our state’s top official looking me in the eye and telling me that I should have to break the law to buy marijuana from an illegal drug dealer instead of being able to access it safely and legally from a tightly regulated state licensed provider as outlined in the H.F. 1818 bill. Is that what his friends in law enforcement would prefer as well?”

The press conference was called after Dayton released the draft of a proposal last week to invest $2.2 million in a Mayo Clinic research trial of cannabidiol (CBD), a nonpsychoactive component in marijuana that has been used in Colorado and other states to control seizures in children.

Medical marijuana proponents quickly pointed out the historic and ongoing barriers to such research.

“At least 34 states have tried this approach. It doesn’t work,” said Heather Azzi, political director of Minnesotans for Compassionate Care, at Wednesday’s press conference.  “Without establishing a supply of cannabis that is legal to study in Minnesota, there will be no research. This is the major flaw with the governor’s proposal.”

In an interview Tuesday with WCCO’s John Hines, Dayton expressed his frustration at the lack of support for his proposal. And in a statement Wednesday, he said he had been “wrongly portrayed as the sole barrier to sufferers and their access to medical marijuana.”

‘I do not advocate breaking the law’

Further, he said in yet another statement, “I cannot, and I do not, advocate breaking the law. But as a father, I understand parents who would do anything possible to help their children. If advocates agree to the compromise solution my administration has proposed – which I believe would provide their children with the medication and relief they need as quickly as possible – then something can be accomplished on this issue this session.”

In his statement regarding the research proposal, Dayton cited the need for a rigorous testing and research process before any drug is made available for consumers. He also cited concerns about marijuana’s negative effects. And he urged stakeholders to work together toward a compromise.

But, said Azzi: “We are not interested in the governor’s proposal as drafted, because it amounts to no more than smoke and mirrors.”