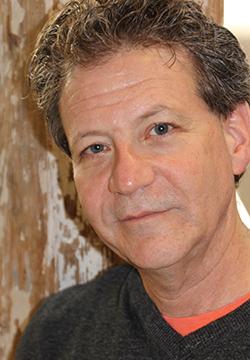 It’s been eight months since Minnesota author Jack El-Hai’s book “The Nazi and the Psychiatrist” (Public Affairs) was released in the United States. Since then, editions also have been published in Norway and France, where it became a nonfiction bestseller. And soon the book will be translated and published for Italian, Spanish, Polish, Dutch, Turkish, Chinese and German audiences. On Saturday, it was celebrated as the Minnesota Book Award winner in nonfiction.

The book has been more widely received in Europe, El-Hai said in an interview this week. “It’s just a closer story to them,” he said. “Their countries were occupied. It’s more personal to them.”

To refresh readers’ memories: “The Nazi and the Psychiatrist” explores the intersection of the lives of former Reichsmarschall and Luftwaffe chief Hermann Göring, one of the top 22 Nazi prisoners at Nuremberg, and Dr. Douglas Kelley, the U.S. Army captain and psychiatrist whose job it was to assess the prisoners’ states of mind and whether they would be fit to stand trial. A U.S. psychologist, Gustave Mark Gilbert, took up where Kelley left off, just months before the trials began, and the two doctors came to quite different conclusions about the prisoners. Where Gilbert saw monsters, Kelley (with rare exception) saw people with unnervingly human traits whose psychological makeup “was in the normal range.”

Kelley’s conclusion that the “qualities that led the top Nazis to commit and tolerate acts of horror existed in many people, living in many places,” though validated since then by many of his successors in the field, remains a much-debated and sore topic.

El-Hai first heard mention of Kelley by way of Dr. Walter Freeman, the subject of El-Hai’s previous book “The Lobotomist” (Wiley, 2007). Freeman had been studying fellow psychiatrists who committed suicide, including Kelley. El-Hai made a mental note to follow up at a later date. He eventually located Kelley’s oldest son, Doug Kelley, in a small town in Northern California. Doug Kelley, now a 65-year-old Postal Service retiree and trauma survivor in his own right, gave El-Hai free access to the piles of boxes that Dr. Kelley had shipped to himself after his three years in Nuremberg.

Exploring that trove, El-Hai said, was “a once-in-a-lifetime opportunity.” Upon opening the first box, he found a glass vial of the paracodeine pills (a rare form of opioid) to which Göring was addicted. Also in the boxes were Kelley’s notes and observations of the results of the Rorschach and other tests he administered, along with the biographies he had each prisoner write – some in German and some in English.

As he mined the details of Göring and Kelley’s interactions, El-Hai found that his own assumptions about the “Nazi personality” were being tested. Here are some excerpts distilled from our conversation this week:

MinnPost: Did you approach this topic with any beliefs – formed in childhood or later in life – that were challenged?

Jack El-Hai: Definitely. I lost a lot of relatives in the Holocaust, mainly in U.S.S.R., Greece and Romania. My thinking was that these men, the planners of the Holocaust, were out of their minds. They had to be. How else could it have all happened? How could people of normal sensibilities and connection with other people have done these terrible crimes? 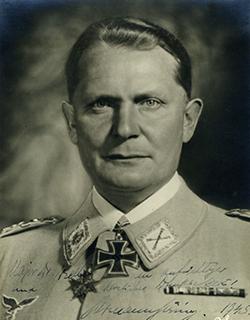 But through working on the book, I have to come down with Kelley. Much to his … great disappointment and surprise, he could find no signs of psychiatric disorder or mental illness in any of [the 22 prisoners] except one. And he expected to. As a psychiatrist, he believed that psychiatric medicine could explain all kinds of human behavior, including criminal behavior … way out on the fringe.

But he concluded, using tools available at the time – the assessments, the Rorschach and the others – that there were no signs of psychiatric illness and that these men had personalities and behavioral traits that were within the normal range (which isn’t to say that everybody has them). And that they expressed themselves during this really unusual time of opportunity for people like them who were grasping for power and hungry for attention and wealth. And that they, like many, many other people in similar circumstances were willing to walk all over other people to get what they wanted.

So, yes. That’s how I now think of them as well.

MP: How do you explain the fact that Drs. Gilbert and Kelley came to such different conclusions in their assessments of the prisoners?

JEH: Kelley had a very bad command of German and always worked through interpreters. But what Kelley had that Gilbert didn’t was great facility in understanding and interpreting the assessments that they used: the Rorschachs and the extensive interviews with the Nazis. … Gilbert was really a neophyte with the Rorschach. He was also colored in his assessments because he was Jewish. And he probably felt the same thing I did when I came into this book: personally wronged, harmed and attacked.

Gilbert is a hard person for me to read, to understand, because even in his own book about Nuremberg he doesn’t say much about himself. I think Kelley reveals a lot about himself. And one thing he reveals is that he believed he was a lot like Göring, and maybe one or two of the others, and was able to put himself in their shoes. That gives me faith in his judgment. I don’t think he was deceived by [the Nazi prisoners] at all. He was well aware of who Göring was, and what he was capable of – his viciousness and coldness. But he could understand them I think in a way that Gilbert could not.

One of the important outcomes of Kelley’s work is [the conclusion] that there aren’t monsters. People like Göring will, along with their despicable qualities, have some good qualities. And that’s what makes them human.

MP: In looking at the Rorschach test results, what was most interesting and revelatory to you?

JEH: That Göring was unusually imaginative in his responses. He showed a richness of imagination that none of the other 21 Nazis displayed. He was a great storyteller and a joke-teller, and he could see the big picture.

Unlike some of the others, he wasn’t a single-minded drudge. He was … not like [Alfred] Rosenberg or [Julius] Streicher or [Joachim von] Ribbentrop or some of the others, who personified the “banality of evil” that Hannah Arendt talked about. There was nothing banal about Hermann Göring. He was an exceptional person. Whether you were on the receiving end of his bad side or good side, he was an unforgettably colorful person.

MP: Dr. Kelley became increasingly disturbed after his time at Nuremberg. Do you think he was traumatized there? 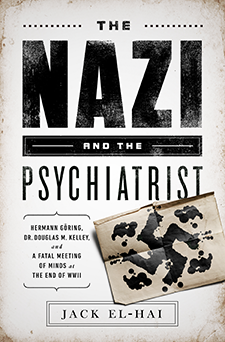 JEH: I think he was traumatized before the war began by his upbringing. His father doesn’t seem to have been a big presence during his upbringing – but his mother was. As Doug [the son] told me, she represented the dark side of the family. She was a pessimist, saw life as a struggle to overcome obstacles and other people. And she taught that to Dr. Kelley when he was growing up. He saw the world that way, too: In order to prove himself he had to do remarkable things. And that’s why he found this opportunity to spend so much time with the Nazis at Nuremberg irresistible.

I didn’t come across anything that suggested to me that he was traumatized by the war. He was really in his element, finding innovative, novel solutions to a problem. … I think he was invigorated by the war. But afterward, the experience in Nuremberg was crushing to him because he realized that psychiatry couldn’t explain it. If these men weren’t mentally ill, then what?

And that’s why he turned to criminology.

I think that mentally ill people overall are less likely to commit crimes. And it bothers me a lot when I hear a rush to the assumption that so-and-so – Newtown or elsewhere – is mentally ill. I don’t think it’s fair to people who are mentally ill to assume that.

MP: What did you make of the parallels between Kelley and Göring’s cyanide suicides?

JEH: One of the inaccuracies of Walter Freeman’s account of Kelley’s suicide is that he [believed] that Kelley’s suicide was directly connected to Göring’s, and that it’s likely that he brought the cyanide back with him from Nuremberg and kept it with him for 12 years. Göring came to Nuremberg with cyanide and managed to save it all those months. I can’t imagine a reason why Kelley would want to give Göring cyanide or the other way around. And there’s a lot of evidence now that a U.S. guard helped Göring get access to the cyanide that he already had hidden.

I came to believe a more subtle connection [between the suicides]: that Göring and Kelley both chose this common way of ending their lives because they were similar guys. What appealed to them was a dramatic send-off, a send-off that would say, “Go to hell” to some of those who were left behind.

MP: How do you answer those who understandably have trouble accepting the idea that “enormous numbers of people” have the potential to act as the Nazis did, and that “it can happen here”?

JEH: How I explain this has been on my mind a lot lately, because at the end of this month I’m giving a Holocaust Remembrance Day talk at a young men’s Hebrew association center in Queens, New York. The person who asked me to speak told me that there would be a lot of Holocaust survivors there, and she asked me to be sensitive in how I talk about this. She said they are not going to welcome a message that these personalities and behaviors are in the normal range.

But what I would have to say to them is that if they were not in the normal range, then that means the perpetrators are not responsible and should not be punished. If we believe that they are psychologically disordered or mentally ill, we shouldn’t execute them, we shouldn’t send them to prison. The fact that they do fall within a normal range makes them responsible and makes their penalties possible and moral. 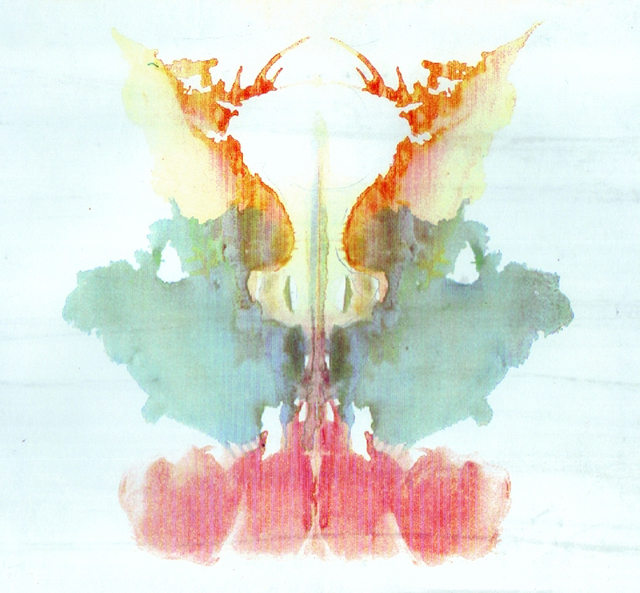 Hermann Göring found a “spook with a fat stomach” in Rorschach inkblot IX.

MP: What has become of Dr. Kelley’s namesake and son?

JEH: In my mind he’s the hero of this story because he is the person who has thought about it for so long and has come out of it a healthy and emotionally thriving person.

He’s about 65 now. He retired from the Postal Service around the time that I started talking to him. … And he still has all the papers.

But he figured it out, and he’s a very happy, healthy, contented person now. He saw [his father’s drive to succeed] as a threat to his life because his father was so overbearing in pushing that on him. So he broke the chain. His grandmother introduced his father to it, his father introduced him to it. But it ended there, which I think is great.