After graduating from Grinnell College in 2003 with a degree in sociology, Jillian Peterson went right into the heart of the beast: She took a job as an investigator for the Capital Defender Office in New York City with the task of documenting the bio-psycho-social histories of men facing the death penalty.

The St. Paul native and Central High School alum said she was expecting “to meet Hannibal Lecter types, to be afraid, to feel threatened,” she said. “And I didn’t.”

Instead, she said, she began to see the humanity in these “very immature, very young” offenders who were “products of the lives they had led. And there was always mental illness, often a laundry list of diagnoses if you went way back.”

Peterson, who got her Ph.D. in psychology and social behavior at the University of California Irvine and now teaches at Normandale Community College in Bloomington, spent the next decade seeking to more deeply understand the relationship (if any) between mental illness and criminal behavior.

She knew already that people with serious mental illnesses were (and still are) overrepresented in the criminal justice system: In 2009, 1 million of the 7.3 million people under correctional supervision in the United States were diagnosed with schizophrenia, bipolar disorder or major depression. She also knew that the research consistently showed (and still does) that the vast majority of people who are diagnosed with mental illness are not more violent or dangerous than the general population and are far more likely to be victims than perpetrators of crime.

But she took the research a step further to ask the question: “How often and how consistently do symptoms directly precede criminal behavior among offenders with mental illness?”

The answer is not very often and not very consistently, Peterson and other researchers say in a study published in the current issue of the American Psychological Association’s Law and Human Behavior journal.

Peterson and her team of eight conducted extensive interviews with and examined the records of 150 parolees of the Mental Health Court serving Hennepin County. (The specialty court, one of three in the state, operates much like the state’s drug courts, with a focus on reducing recidivism by linking nonviolent offenders to medical and social services.)

The researchers identified and analyzed 429 crimes committed by the group’s members across the span of about 15 years, and found that only 7.5 percent were directly related to mental-health symptoms (including hallucinations, delusions, impulsivity, hopelessness and suicidality).

The team took care to establish rapport and build trust with their subjects, Peterson said. They used a “life-calendar” approach to identify and talk through major life events (births, deaths, breakups, traumas) before addressing the crimes.

Out of the cycle

Peterson readily acknowledges some weaknesses in the study: the small sample size and the partial reliance on self-reporting and retrospection. But she said she hopes the results will change the approach to reducing recidivism.

“If you’re focusing on medication and mental-health treatment, you see symptom improvement, which is great,” she said. “But it doesn’t translate into the reduction of crime and violence in the way that you would think it would.”

An effective approach would include not only treatment for mental-health and substance-use disorders, but also attention to basic needs (chiefly housing and employment), she said. “It’s got to be comprehensive and it’s got to be individualized. Each person has such a different story that any one-size-fits-all program I don’t think is going to be very effective.”

Working with the Hennepin County offenders gave her a greater sense of possibility, Peterson said, a different experience entirely (needless to say) from the one on death row. The research subjects “really wanted to get their lives together, wanted to get a job, wanted to have a house, really had goals and dreams that were attainable, and really wanted to get out of the cycle they were stuck in. It felt less tragic. To me I felt a sense of hope.”

Lest you worry that Peterson is at all dispirited by her field of study, you can watch her exuberant wedding dance entrance video, which has been viewed more than 84 million times on YouTube and has become a fund-raiser for the Sheila Wellstone Institute’s work against domestic violence. 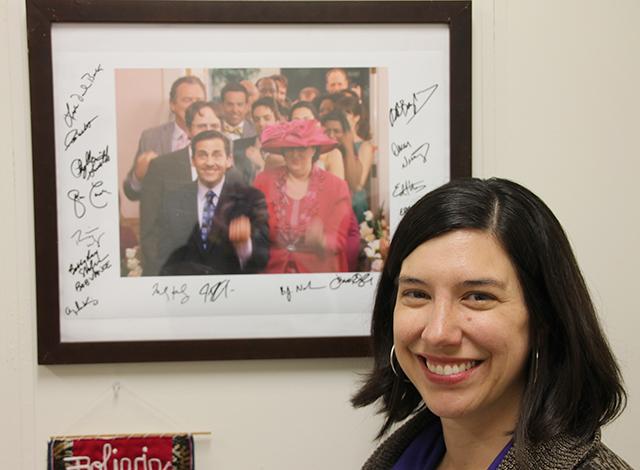 MinnPost photo by Sarah T. Williams
An autographed thank you from the cast of “The Office” hangs on Peterson’s office wall. The TV series borrowed from Peterson’s YouTube wedding video, “JK Wedding Dance Entrance,” which has been viewed more than 84 million times, and which now raises funds for the Sheila Wellstone Institute to help end violence against women and children.

Untangling the relationship (if any) between mental illness and crime