Sanni Brown-Adefope was comfortable in front of the microphone and at ease with the 600 or so people who had gathered last month for Mental Health Day on the Hill in the state Capitol rotunda. Public speaking had become familiar territory for the KMOJ radio host, Toastmaster and improv artist.

But now, at her mother’s urging and with her blessing, she was entering completely new territory. For years, she had shared what it was like to be a foster child; now she was about to disclose how she and her sister ended up in foster care to begin with.

“I have a history of mental illness in my family,” she told the crowd, breaking the silence on what had been a taboo topic for most of her 31 years.

Brown-Adefope’s story is too long for the few minutes she had at the mic that day. But she brought it to greater light during a recent interview, weaving through a Pan’s Labyrinth of abandonment, dislocation, deprivation and isolation.

“My uncle, an ex-Marine, says whatever tough thing you go through, that’s your boot camp, you’re going to need that for later,” said Brown-Adefope, nicknamed “Sweet Thug” by one of her colleagues. “I figure that’s why I grew up fighting.”

When dad chose to leave

Brown-Adefope’s family story begins in Chicago, where she remembers a protected and privileged early childhood with her father, mother, younger sister and older brother.

All that changed in the early 1990s when Brown-Adefope’s father, a Nigerian citizen, got notice that the scholarship he’d used to pay for college had been intended for Americans only and that he needed to repay in full or face fines and penalties. He hired a lawyer, who cheated the family, and then he “chose to leave,” said Brown-Adefope.

Jolted, confused, and eventually overwhelmed by paperwork and bills, Brown-Adefope’s mother packed up the kids and the cats and headed for Minnesota. An aunt with Down’s Syndrome who was pregnant had also joined the family, and there would soon be a newborn to care for.

Brown-Adefope, then 11 years old, doesn’t remember why her mother chose Minnesota, but dimly recalls a plan to meet up with Dad in Canada. Their little caravan never made it that far north.

Brown-Adefope was just 11 years old when she arrived in Minnesota in 1993. Her permanently etched first memory was of her mother being denied the keys for the apartment that she had pre-arranged to rent. The landlord turned her away on sight. “My mother sounds white on the telephone,” she explained. The family stayed in a shelter for a month before finding another apartment.

Brown-Adefope’s mother worked the night shift at a clerical job, trying to make ends meet while still making time for her children when they got home from school. Brown-Adefope remembers her mother becoming increasingly upset by harassment at work and frustrated in her efforts to return to school.

The problems grew exponentially, and her mother’s state of mind began to deteriorate. She became withdrawn; would no longer “cuddle”; would snap in anger at people in traffic and grocery stores, and would spend entire days on the sofa, staring at the TV and not speaking to anyone.

One day, when Brown-Adefope came home from school, every appliance and every light in the apartment had been unplugged. It stayed that way for three days and three very dark nights until Brown-Adefope ran away to a friend’s house. The police were called, and Brown-Adefope was delivered back to her mother with a mild scolding.

Privately, the police officer asked her if everything was OK at home. She told him, “It seems like something’s wrong with my mom.”

In the spring of 1996, Brown-Adefope’s mother shocked the family by announcing that they were moving back to Chicago and had just a few days to “pack what you can.”

Brown-Adefope, who was just weeks from her eighth-grade graduation, put up a fight. But her protests were useless, and soon all (cats included) were on a Greyhound bus to Chicago.

After a short stay with another aunt, Brown-Adefope and her mother and sister went in search of their own place to live. Brown-Adefope can hardly find the words to describe where they landed: an unheated, cockroach-infested apartment with no working toilet. “The place was gross,” she said.

The situation forced now 14-year-old Brown-Adefope to “get creative.” She turned on the stove for heat, and used a fan to force the warm air through the cold rooms. She got a bucket for the toilet. She took charge of the food stamps and the “budget.” She admits to splurging on snack foods at the beginning of the month, knowing that they’d run out of money for food around the 20th and have to go without.

Her brother would help as much as he could. “I’m not mad at him,” she said. “I know now he just didn’t know how to deal with it.”

She kept her sister tucked under her wing, and together they watched their mother fade further into a world they could not name or fathom. “Every now and then, she’d come back and talk to me,” Brown-Adefope said. “But I knew in my heart she wasn’t herself.”

They were evicted, eventually, and Brown-Adefope imagines how they must have looked as they sought shelter, carrying their belongings and the three cats: Leo, Tiger and Patchy. “It’s not funny,” she said, laughing out loud in spite of herself. “We were literally trying to find a shelter that would take us and our cats. We would hide them in our luggage. The shelters would find out and put us out. ”

Their mother finally told the girls they’d have to put the cats in a box and leave them outside. “We checked on them every day, until one day they weren’t there,” Brown-Adefope said, no longer laughing.

Another move back to Minnesota found Brown-Adefope, her sister and her mother hopping from shelter to shelter. They’d be evicted again and again, and each time Brown-Adefope would be told, sometimes diplomatically and sometimes cruelly, that her mother had “broken the rules.”

She never understood what this meant. “Can’t you see that she’s sick?” she would implore of the person(s) in charge. “Am I the only person who is seeing that my mom is sick? There’s something wrong – there’s got to be something that can be done!”

Her mother, who had never been a heavy drinker, went out one night and was arrested and taken to detox. “I had never heard the word ‘detox’ before in my life,” Brown-Adefope said.  The arrest brought child protection into play, and the girls were taken first to a hospital, then to an emergency shelter, then a foster home. The hospital visit struck Brown-Adefope as especially humiliating. “They checked us. I don’t know why. To see if we have fleas?”

Foster Family No. 1 was tough on Brown-Adefope, who was by now prematurely self-sufficient and not interested in complying with rules that made no sense. Like the ban on cheerleading as a punishment for the “bad grades” she got during her lost ninth-grade year in Chicago (only two months of which were spent in school). Now she was on the honor roll and captain of the cheerleading squad. Why shouldn’t she cheer?

A malevolent foster sister, the foster parents’ natural child, made things even more miserable: “That’s not your mom – that’s my mom!” she told Brown-Adefope and her sister (as if that were not already eminently clear).

For cheerleading and other transgressions (including unflattering diary entries that she knew would be read by her foster parents), Brown-Adefope was evicted from Foster Family No. 1 and separated from her sister.

She is not a person who dwells in resentment. Still, she can’t help but reflect on the injustice of that chapter of her life: “I was painted as a wild teen who acted out all the time. Nobody considered what had happened to me before I got to their house. Nobody said, ‘You know something Sanni? I know why you’re behaving like this. What do you need? What do you need from me?’”

The person who finally asked that of Brown-Adefope was Margaret (Granny) Coleman, the “in-your-face,” fully engaged, empathic and rigorous head of large Foster Family No. 2.

Brown-Adefope might have been a “delinquent” in Foster Family No. 1, but, by God, in Granny’s house she was going to become a Links debutante, an Arlington High School honor roll student, and a Concordia College graduate with a bachelor’s degree in psychology.

Putting the pieces together again

As Brown-Adefope got a foothold into adulthood, her mother got a foothold in recovery. She wandered for a while, including to the South to reconnect with her family roots Mississippi. Over time, she made her way North again to Chicago, where her older sister, a social worker, got her the help she needed – first in a hospital and then in a community-based home. 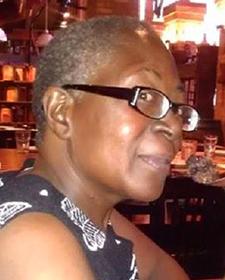 At her lowest point, she believed that Satan was telling her, “I killed your family.”  To block the voice, she would recite the 23rd Psalm.

Grace Imasuen was diagnosed with schizoaffective disorder, a condition in which a person experiences the symptoms of both schizophrenia (including delusions and hallucinations) and mood disorder (mania or depression).

Her symptoms were controlled with both therapy and medication. As her health improved, she reconnected with her daughters.

They live together now in St. Paul: Sanni Brown-Adefope, her daughter, her sister, her nephew and her mother.

Brown-Adefope and her sister keep a close eye on their mother, and she in turn watches out for them. She’s forthcoming about her experiences with mental illness and warns them to avoid the triggers: overwork, stress, and lack of sleep. There are things you can’t control: when someone leaves, when someone dies. But you can control the things you put on your plate, she tells them.

Brown-Adefope — a single mom who hosts a 2-5 a.m. KMOJ show, works morning hours at the Minnesota Autism Center, and participates in professional speaking, Toastmasters and improvisational theater — sometimes has a hard time hearing her mother’s advice.

“She’ll tell me, ‘Sanni slow down.’ And I get mad at her. I know — I know this! But she’s gone down that path, and doesn’t want to see me going down that path.”

Her mother’s experience has made her more mindful about mental health.

“As women, we think about breast health,” she said, “we think about eating right, keeping our skin and hair healthy. But we don’t really see people tending to their mental health. And so, for me, a big thing that I do is self-talk — ‘Sanni, it’s not as bad as you think it is’ — and making sure that this up here [points to her head] is OK. … My mental health is extremely important to me, and I tend to it by doing things that really bring me happiness, that I find fulfillment in.”

“I know the value of having a comfortable, peaceful, solid household. I know that.”

A voice for her mother and others diagnosed with mental illness