About 10 years ago, Dr. Jim Letts began to notice an influx of Karen refugees in his primary-care practice at HealthEast Roselawn Clinic in St. Paul. All had been exiled by Myanmar’s long-running and ongoing civil war. A high percentage had experienced forced labor, torture, rape and other trauma. And most had lived in Thai refugee camps for an average of 13 years.

“You would see 13-year-old kids,” Letts said, “and you’d realize that they had spent their entire lives in a camp.”

The staff moved quickly to accommodate the newcomers, partnering with the Karen Organization of Minnesota to locate bilingual and culturally competent staff members (there now are five on staff) who could help identify the most pressing needs, including mental-health care. Screening for tuberculosis, hepatitis B, intestinal parasites, sexually transmitted infections and lead poisoning was routine and fairly straightforward. But accurately screening for post-traumatic stress disorder and depression, common issues in this population, was another matter entirely.

A kind and discerning man, Letts did not want to make matters worse for his patients by preemptively re-opening wounds or unwittingly shutting down a conversation.

“I walked a fine line between directly asking them about traumatic experiences, and not wanting to re-traumatize them by making them feel that they had to tell their story,” he said. “Often that would come later, when I got to know patients better.” He aimed for a nonthreatening approach: “The most effective ways we got at [mental-health issues] were by talking about some of the symptoms associated with depression and PTSD — asking them about their sleep habits, about nightmares, about their mood and things like that.”

Aware that available mental-health screening tools were too general and yielding too many false positives and false negatives, the state Health Department’s Refugee Health Program convened a working group in 2012, bringing together experts in refugee health, bioethics, psychology and social work. Organizations across the board were represented, including the University of Minnesota, county and numerous other public health providers, insurance companies, and the Center for Victims of Torture. Letts and a HealthEast colleague, Dr. Shana Sniffen, also were at the table to lend their experience and expertise.

The groups’ challenge was to design a tool that could be used to more accurately identify refugees whose level of distress rendered them incapable of caring for themselves or their families and unable to manage the difficulties associated with resettlement and adjusting to a new culture (housing, employment, education, etc.).

The tool would be for assessment purposes only; those identified as needing further mental-health services would be referred for diagnosis and appropriate psychological care.

To design a tool with questions that would work cross-culturally, they looked at health outcomes data for two traumatized but culturally distinct groups: Karen and Somali. (According to Department of Health statistics, there currently are about 5,000 Karen refugees and 19,000 Somali refugees in the state.)

The work group members faced some interesting challenges: Questions around mental-health issues can be easily misinterpreted or impossible to translate.

Interpreters, for example, struggled to translate the idea of “depression.” And any questions about diminished sexual desire, a common symptom of depression, would often get lost in translation, said Greg Vinson, senior research and evaluation manager at the Center for Victims of Torture and member of the working group. One question came across to Karen as meaning, “Are you committing adultery?”

Other challenges included eliminating the potential for responses that are “socially desirable.” Vinson explained that some refugees base their responses to screening questions on what they had learned might gain them passage from the camps. 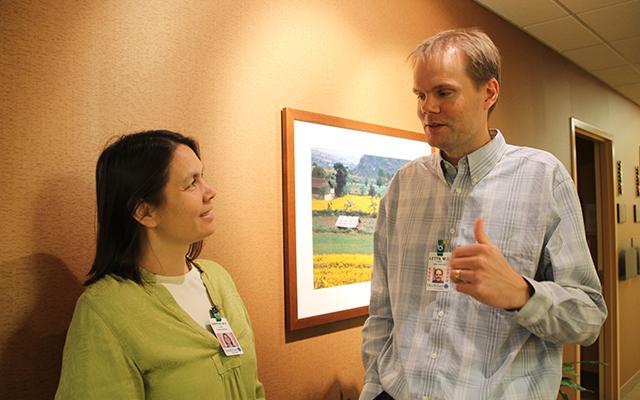 And even seemingly innocuous questions might not yield relevant results. For example, a provider might understandably inquire about problems with sleep, sometimes a symptom of PTSD and other disorders. But such problems can just as easily be linked to noisy neighbors, jet lag, unstable housing and apartments on four lanes of heavy traffic, said Vinson. “They may have sleep issues that have nothing to do with mental-health stuff,” he said. “In a screener, it’s a bad item — it never predicts anything.”

Calibrating the questions was also important. “It’s one thing to ask, ‘Are you thinking of harming yourself or having suicidal thoughts?’ ” Vinson said. “It’s probably easier to ask, ‘Are you feeling sad?’ A lot of times good screening items are ones that people would be comfortable answering … [and] that providers — especially ones who don’t have mental-health training — are comfortable asking. Even experienced providers sometimes will have difficulty inquiring in much depth about suicidal thoughts and ideation, things like that.”

The working group issued its findings last week, agreeing on these five questions:

The Refugee Health Program said in its final report that it will pilot the tool in select clinics across the state in the coming year. Each clinic will get training and ongoing support, and the pilot results eventually will be implemented for all refugee arrivals in the state. The goal is not only to extend humane care and increase social functioning, but to make sure that limited resources are allocated to those who need them most.

Letts said his clinic, which now serves 2,500 Karen patients, has deepened its understanding of the needs of those who have been violated and traumatized.

“It has changed the nature of the care,” he said. “I never do an invasive procedure exam of any sort the first time I meet a new refugee patient, not even minimally invasive. You don’t push somebody off to a pap smear or a mammogram or a colonoscopy right off the bat. You hold off and build some trust and a relationship before you start talking about those types of things that might be really re-traumatizing to a patient.”

Along the way, Letts said, he has come to appreciate the Karen, their culture, their history and their experience.

“The thing I love most about working with the Karen is their resilience,” he said. “These families that have been through these difficult things repeatedly, and are here now in a difficult situation, are laughing, joking – very happy that they’re able to see the doctor and that their kids are going to school.”

Meeting the needs of traumatized refugees: What to ask, what not to ask