Patrice Salmeri has seen addiction and recovery at both ends of the continuum: first on the treatment side as a counselor and assistant clinical director at Hazelden’s youth treatment center in Plymouth, and now on the recovery side as director of the StepUP program at Augsburg College.

“On this side, you get to see the living part,” she said during an interview Tuesday in her campus office. “You get to see what happens afterwards, when they start to live and thrive and develop and delve into deeper things in their lives that have both gifted them and held them back.”

Salmeri has overseen the program, which offers counseling and sober housing, for 12 of its 17 years. She has watched it grow — from serving 20 or so students a year to 150 a year. She has watched two of its graduates go on to replicate the program on other Minnesota campuses (at St. Scholastica and St. Cloud State). And she has just said her goodbyes to the 30 2014 StepUP graduates, 10 of whom received high honors.

A sculpture on her windowsill — of butterflies seeking moisture — serves as a metaphor for the process of letting go.

“When butterflies first come out of the cocoon, they go in a group to the mud because they’re dehydrated,” she explained. “I got to see that once Up North. It’s just like the students. They’re coming out of a cocoon and their wings are wet, so they can’t fly yet. So we nourish and support and encourage. And they fly one day.”

Salmeri and Augsburg will be host June 5-7 to the 5th annual National Collegiate Recovery Conference, a gathering of several hundred professionals representing more than 30 recovery programs on campuses across the United States. As she prepares for the conference and to take on a leadership role as the new president of the national Association of Recovery in Higher Education, she reflects with gratitude on her work, on her own gifts and on overcoming those things that once held her back.

MinnPost: What drew you to this field?

Patrice Salmeri: I want to say it was a fluke, but it wasn’t a fluke; it was fate I believe. I was studying to be a clinical psychologist at Trinity University in Chicago when I ran out of money. I decided to go to the College of Lake County. A friend had said there were some classes I’d enjoy taking, and it turned out they were all in the addiction program.

I took a couple of classes, and realized … this was [a picture of] my family.

I was in my late 20s, maybe even 30. One of the professors, the chair of the department, offered me a scholarship. I went that route, and for me it was a healing of my heart and an opening to a whole new world to discover that this is what addiction is, this is how it plays out, and this is how it played out for me. And what can I do to help other people see it sooner?

I realized I had to move my own self forward. Until I did my own personal work, I couldn’t help anybody else because I’d be working on an empty tank.

MP: What does it take to work with young people in recovery?

PS: Persistence, for sure. Patience, which I have a lot of — for everyone but myself [laughs]. Respect — the ability to treat young people with respect. They don’t get a lot of respect, especially when they’re using.

I’ve been gifted with this ability to see who they can become rather than who they are at the moment or who they’ve been up until then. I go with the acorn theory — that we are born with what we’re supposed to be inside, and we spend our lives becoming the oak tree.

I think everybody has within them what they’re supposed to be. It’s about finding the goodness, searching for truth and overcoming trauma and negative past experiences. If they’re willing to — it’s not an easy journey, but a lot of people do it.

MP: How do you help young people make that transition from treatment to a college campus, where sobriety gets tested at every turn?

PS: I think most of it is encouragement. Some of the messaging is around, “Just try it.” “Trust me on this.”

They have to have six months clean and sober before they come here. We don’t require treatment, but a majority come from a treatment experience. We have an intensive orientation before they move in. One of the very first things we do is a ropes course. Some upper-class students will join us, and there’s a lot of affirmation, a lot of cheering on. And a lot of comparing it to the steps. If you’re stuck on a certain height on a climbing wall, we’ll ask, “How are you doing with your third step?” and “What does that say about trusting people?”

My colleague Tim [Brustad] says all the time, “Don’t be afraid to ask the question, but be sure you can handle the answer.” When [the students] ask to go to clubs, for instance, we always check the venue out on the computer, and ask why they want to be there. Some people get upset [if the answer is no]. And others completely understand and almost feel safer, and they can tell their friends, “I’m not allowed to go,” versus, I have to make that choice or not.

MP: What happens if you have a student who is not amenable to a Twelve Step program?

PS: Sometimes they come right in at their intake interview and say, “My parents want me to be here. I want to be here. But I don’t want to work the Twelve Steps.” We have some options for them. A student has to have a “sponsor,” go to two meetings a week, and meet all the obligations of what we say is a healthy recovery life. We’ve had Red Road [Native American] students. We’ve had a few students who enjoy SMART [self-help] recovery.

We do believe in abstinence as the goal; we are not about harm reduction. One of our students goes to meetings through his church. He’s a community advisor [for the younger students] and has applied for a SAMSHA [Substance Abuse and Mental Health Services Administration] internship. We’re crossing our fingers.

MP: What about people who are on buprenorphine or other medications to assist withdrawals or curb cravings? 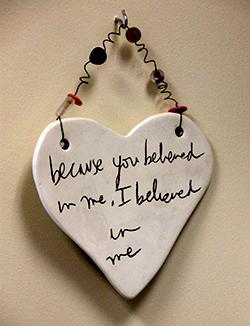 MinnPost photo by Sarah T. Williams
A gift from a student hangs on Salmeri’s office
wall.

We had a student who was already on withdrawal medication when he came, and he wasn’t using it as a lifetime maintenance drug. His doctor was very on top of things as far as communicating with us. And he [the student] wanted to taper off — that was his goal. And he said he wanted to taper off in a safe environment. What better place to do it than here?

Would we want the whole population to be on [medication assisted treatment] at the same time? Absolutely not. But one or two or three students — that’s not a problem. We really want to handle students individually.

MP: What trends in drug use have you seen on campus?

PS: Among the general population? Definitely a rise in opiate painkillers. And trading drugs for drugs: “I will trade you a Xanax for an Adderall; I have a test to study for.”  With alcohol, first-year students have a misperception of what college is supposed to be — more of the Animal House viewpoint that everybody drinks in college. And that’s what they tell their parents. But in fact 70 percent of students don’t drink to the point of blacking out or having a problem with alcohol. It’s just that the 30 percent gets all the attention.

All the programming on our campus is drug- and alcohol-free. So if someone were drunk or high, they would be cared for by our public safety or residence life staff to make sure they are safe if they need to be transported to a hospital. We also have a rule that if you call about somebody else, you’re not going to get in trouble; you’re going to get immunity for saving a life, which I think is a wonderful thing.

A couple of years ago, I saw a trend toward K-2 and bath salts. It didn’t last very long. Once it became illegal and people got scared, they decided to try other things. And the same with energy drinks. They’re still very popular on campus, don’t get me wrong.

MP: Do you think the presence of the program has had an impact on campus culture across the board?

PS: Definitely. Our students are the first ones to say, if someone’s in trouble, I really want to talk to them. If someone ends up in the dean’s office for an alcohol or marijuana violation, they might be referred to StepUP.

We used to have a committee of faculty staff that would meet about spreading the word, getting the message out. After a while, we didn’t need it anymore because they were already spreading the word. We have a faculty member who introduces herself by saying, “Hi, my name is so-and-so and I’m in recovery.” And our students just go crazy, clapping.

This is a great place. It’s pretty transparent, and the people are very much about doing what’s best for the student — whether it be the hard decision to fail them in a class, or whether it be, “How about if I walk you over to StepUP? Would that be easier?” Of course it would. Going alone is hard.

I’ve met the most wonderful people here — everyone from the janitor to the president. The president [Paul Pribbenow] calls us all by name, and the program has flourished under him.

MP: How do you measure success with your students?

PS: A lot of people measure success by statistics, by numbers: Our abstinence rate is 93 percent, our GPA is higher than the college’s [at large]. A lot of people would say you can’t measure using qualitative data or by the essence of people. So I probably wouldn’t pass a research class right now.

Graduation is the best day around here. We have our own graduation on the Friday before commencement. I said before that I was gifted with this wonderful ability to see people as they are going to be. I get to watch that at graduation. … I measure success when my eyes meet theirs when they get their medallion and their diploma.

MP: What will be your legacy here? What will you leave behind?

‘My dream job’: Helping college students in recovery get their wings