As Beverly Lonsbury embarked on her Ph.D. studies at St. Paul’s Luther Seminary, her clinical pastoral education supervisor presented several options on where to do a chaplaincy internship: a transitional housing facility; an emergency shelter; a homeless shelter — or a wet house.

“Anything but the wet house,” she said at the time.

Wet houses (there are five in Minnesota) provide food, shelter, clothing and medical and sometimes spiritual care for late-stage, chronic alcoholics. Residents are typically men ages 40 to 65 who have made multiple trips to detox centers, have been homeless for extended periods, and have attempted multiple treatment programs. They’re allowed to drink on the premises in a designated spot.

Whereas some view this “harm reduction” model as a form of capitulation, others see it as a cost-saving, humane alternative to living (or dying) on the streets.

“God certainly has a sense of humor,” she remembers thinking when her supervisor persuaded her to answer the call. “But if that’s where I’m needed, then that’s where I’ll go.”

Her hesitation and anxiety, she said, had less to do with concerns about the residents and how they might behave and much more to do with a central question: “Can I possibly make a difference?”

Lonsbury — who asked that the wet house where she volunteers not be named out of respect for the residents’ privacy — prefers to stay out of the politics, and focus on her ministry.

As she volunteered over the years, Lonsbury began to apply everything that she was absorbing in scholarship, including practical theology (in everyday life), interpersonal neurobiology (the way relationships shape the brain), family and community systems theory, nonviolent communication, and spirituality complexity and anxiety’s effects in post-modernity.

At least some part of her day was spent “sitting by the coffee,” in the common area where residents tended to gather. At first she requested that they be sober for their interactions with her. But then no one showed up — except for one man, who was not sober. He had to drink, he explained, to keep from shaking. Startled into awareness, Lonsbury adjusted her expectations, requesting only that the men be “relatively sober.”

The men told her stories, often gut-wrenching, some of which she captured in her dissertation field notes (names have been changed and Lonsbury’s punctuation and bracketed additions are verbatim):

3-27-09 [Lenny is a] Vietnam vet has flashbacks and nightmares was an airborne fighter not a Green Beret brought in the new troops, picked up the dead 300 hundred in unit only 49 came back [he’s] tortured by memories and was married five times they were afraid of [his] nightmares and battle scars [he] drank when [he remembered]. [It] helps to talk spiritual [he] knew the medicine man [he’s] on antidepressants.

The men had lost their “buffers” and were very authentic, she said, and did not hesitate to ask the tough questions again and again:

I’ve done some terrible things; does God really forgive me?
Could God really love someone like me?
I’m scared; do you think I will be condemned forever?
Being an alcoholic is a curse; where is God in this?
I don’t want to die alone; will you be there with me when I die?

Sometimes Lonsbury would be called upon to put her nonviolent communications and system theory skills to work. The trick in defusing a potentially violent situation, she discovered, was to make eye contact with the person who was least agitated:

12-31-12 Dirk, Matthew, and Jason were sitting by the coffee with me — all three of them were intoxicated. Dirk and Matthew were laughing [and sharing stories] but Jason was swearing and telling Matthew that he was ready to kick him with his boot. Dirk and Matthew looked at me and told Jason to stop but Jason continued swearing [and threatening]. Although I felt some anxiety, I remained calm with a small smile on my face. I made eye contact with Matthew and he remained calm [and moved away from Jacob so he would not be kicked].

The men were sometimes funny:

12-7-11 [Mick showed me his notes about me that read] you’re caring, compassionate, helped a drunken mouthwash drinker stop drinking mouthwash and stopped me from being a violent person — and I like your good hair days.

And Lonsbury herself did not lack a sense of humor:

4-16-09 Nick came over, sat down, started mumbling — got louder and louder [I couldn’t understand him], he started pounding his fist for a minute and was very dramatic. All of a sudden he looked at me with a big smile and said thank you for confession Rev Bev [I was stunned and didn’t know what to say so I replied] you’re welcome — go in peace.

As to whether or not she was able to “make a difference,” the answer becomes clear:

1-23-12 I am so glad he is back and safe! [Perry] told me when he was out on the streets [last month] he had been in the hospital five times — hypothermia — the flu — detox — blacked out twice once in a motel room the police found him. He told me more about his family — physical, sexual and spiritual abuse. He told me he was abused by his Methodist minister but he has survived. I felt sad and took a few minutes to mourn the trauma Perry and others have survived. I asked Perry to look at me as I told him I care — and that I am sad about all the pain he has experienced. I saw the tears in his eyes as we made eye contact. I am relieved he has his housing back.

As she worked, Lonsbury became aware of the need for self-care to prevent burnout. The work takes an emotional toll.

“Every once in a while all the suffering around addiction and the illness of addiction really can get to me,” she said. “And I have to … feel those waves. I sob when I need to, and then I find ways to have some fun to release all the pain around the addiction and the suffering I see — in families, and in the men. They wonder what they’re doing there, in a late-stage wet house. There’s a lot of pain and embarrassment and shame around that.

“They wonder what the heck they’re doing there.” 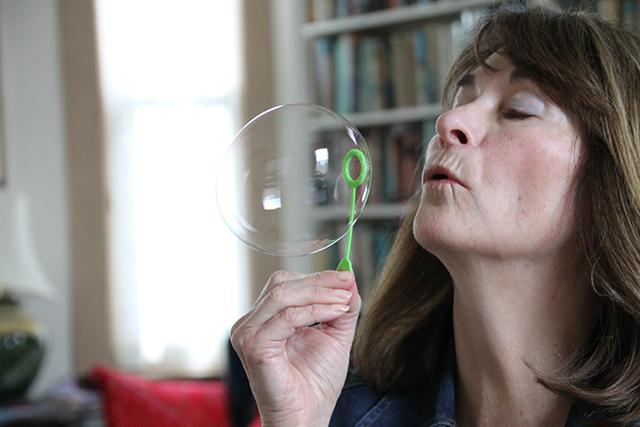 MinnPost photo by Sarah T. Williams
“The Rev. Bev,” as she’s known at the wet house, blows bubbles every now and then — to remember to breathe, to relieve anxiety and to add an element of play to life.

Lonsbury found that her anxiety was highest as she made her way to the wet house. To quell that, she recast her anxieties into “unpredictable adventures.”

It helped, she said, and now she feels less anxiety on her way in, and a “deep sense of contentment” on her way home.

“I come home feeling satisfied, knowing that I made a difference in somebody’s life and that they made a difference in mine. They’ve shaped who I am, too,” she said. “I have such deep respect for these men. Many are veterans, and they have served us. Can’t we serve them? Isn’t it our responsibility to serve them, no matter what?”

Lonsbury has adopted other, more quirky and amusing coping skills. “I blow bubbles. I read children’s books. I have a playful need, a need for fun,” she said.

Lonsbury has her own business and teaches at Luther Seminary, preaching what she practices, coaching her students on “listening closely, listening deeply, listening with the heart.”

In these post-doctoral times, Lonsbury still volunteers at the wet house, where she has earned the nickname “Rev. Bev,” though she’s not ordained in any specific denomination. She remains heart-sore about alcoholism’s ravages and attuned as ever to her purpose there.

“My hope is that [the men] will die with greater peace and reassurance that, no matter what, they are loved.”

‘Rev. Bev’ and her gut-wrenching yet rewarding wet-house ministry