Kevin Chandler has a unique understanding of his peers in the legal profession who are struggling with substance-use disorders: He knows they’re at higher risk, he’s been there himself, and he’s willing to put a face on his own recovery to help them and others.

Chandler, of White Bear Lake, a longtime lawyer and former state senator and now a consultant for nonprofits at dotorg, said his alcohol use was progressive — “not an overnight thing.”

“You occasionally hear someone say, ‘I knew I was an alcoholic from the first drink I had.’ It was not that way for me,” he said. “But it was my way … of making the butterflies go away. In politics, you’re constantly subject to pounding and beating. It just progressed to the point where [alcohol] was way too important to me, it was starting to have an effect on my family, and, as often happens to people, legal consequences. … And so I sought recovery treatment [in 2006] with a lot of support from family.”

He’d rather not revisit his bucket of regrets (including his precipitous exit from the Senate). But to help himself and others move forward, he has written “The Lawyer’s Light,” a book of daily meditations published this month by the American Bar Association. Tailored for legal professionals, the book quotes everyone from Andrea Bocelli and John Cleese (yes, they studied law!) to Aeschylus and Aristotle and covers such issues as living on the edge, the difficulty of admitting when we are wrong, the desire for perfection, the neglect of family, and the value of silence.

“The book is very forward thinking,” he said of his motivation for writing it. “It’s about closing the pages on old wounds and old mistakes and old regrets that haunt us and prevent us from moving forward and getting well. Lawyers in particular I think return to the past over and over again — like a dog to his vomit. And it’s of no productive value. The past is the past; the future is the future. All we have is the present.”

MinnPost spoke with Chandler about legal professionals’ higher risk of substance-use disorders, the impediments they face in recovery, his own road to recovery, and his work with peers who are struggling.

MinnPost: As you well know, lawyers have higher rates of suicide and depression and are at twice the risk of substance-use disorders compared with the general population. What’s your understanding of why that is?

Kevin Chandler: There are lots of theories why.

The stress that goes with the practice of law is incredible. You’re under constant deadlines. You feel a lack of control because other people are making the decisions in terms of outcomes of cases. Lawyers are very independent — oftentimes, there’s no need to be accountable to supervisors or anyone like that. It might be just the personality type that’s attracted to the practice of law: very aggressive, hard-charging, high-achieving.

As in any other occupation or profession, in law school you’re trained to think a certain way. Just as plumbers or actors learn tricks of the trade, lawyers are trained to think in a certain way. It’s like the classic line from “The Paper Chase”: “You come in here with a skull full of mush, and you leave thinking like a lawyer.” And that sounds trite, but it’s really true because you’re taught to think linearly and logically and question facts … to solve and anticipate problems.

The other thing that lawyers are trained to do is to keep up appearances, to not reach out for help — that’s weakness. To not show vulnerability — that’s weakness. Everybody wants the toughest lawyer, the bulldog. You don’t want someone with vulnerabilities representing you. And so they work nonstop to keep up that veneer, and that’s not something you shut off very easily.

I assume that for me and for others that the way that is accomplished is by self-medicating.

MP: How and why does this complicate recovery for lawyers and other legal professionals?

The Big Book says none of us can perfectly adhere to these principles. Well, lawyers are perfectionists. It drives us crazy to make a mistake.

Things like meetings I found very difficult, because I didn’t feel like I had much in common with others in the meeting. Now that is a false and elitist attitude. But I felt like I didn’t belong: What possibly can I get from you, or you from me? We’re in different universes. And it’s just the culture of the law. We’re seen in society as leaders, problem-solvers, as a profession that’s often held in high regard, and that gets ingrained.

Those are some of the issues that went into this big cauldron of recovery for me and that I saw were a problem for others as well.

MP: How is it that you were able to make that leap of faith? 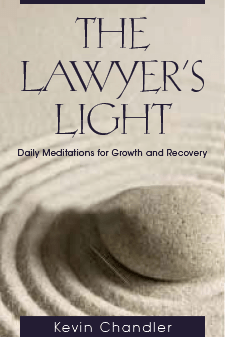 KC: I think it was just the willingness to consider the possibility and not to have to decide one way or the other, but just consider the possibility. Benjamin Franklin says faith is just closing the reasoning eye. If you can close your eye to reason and open your mind to possibility it does provide a look into your soul that you can’t get from reading hornbooks or case books or any book.

Since that time I’ve tried to nurture that fact. Just a couple weeks ago I went to the Jesuit Retreat House [in Lake Elmo, Minnesota] and spent a week in total silence with my companions. I just felt the need for the no-frills silence that the Jesuits offer. I’ve learned to slow down and think and contemplate more. And expand my mind. And I think that makes for better lawyers, as well as [improved] wellbeing.

But there was no “white light” moment as Bill says in the Big Book [laughs]. Thanks, Bill.

MP: Some treatment programs are adding specialty tracks for lawyers. But the feeling of uniqueness is often cited as a roadblock to recovery, just as you described. Doesn’t a specialty track just feed into that?

KC: I think there’s a misconception about those specialty tracks because they are only a portion of the program. So Hazelden, for example, has the Legal Professionals Program. But people participate with everyone else the lion’s share of the time, and then there’s a break-out session for the lawyers.

But what’s more important is that we think in a unique way that requires or maybe suggests a different approach to recovery.

MP: Tell us about your work with peers as a volunteer for Lawyers Concerned for Lawyers.

KC: You realize quite quickly that there aren’t too many different stories involved. I’ve met with a couple of high-profile attorneys, some who have been in the news, and as a result are very afraid. I met with a district attorney from another state. I asked him how he was doing. He said not so good. He had crashed his car and got a DUI. He said, “Google me.” So I did. And sure enough the news from his city came up, top story on the 10 o’clock news. He had put away hundreds of others for this crime, and so you can imagine the incredible stress and anxiety.

I told him that he’d be surprised at the number of famous people — people he would know — who have been in very similar situations.

It was very comforting to me to get a call from someone with the stature of, say, Jim Ramstad, who had traveled down this road before and for whom I had such high regard. It was as if he was saying, “Kevin it’s OK to be vulnerable. Kevin, it’s OK to take the help.” And he even said, “I’m going to make a prediction: I think once you’re in recovery, you’ll even enjoy it.”

This is what’s helpful about LCL and other programs: Telling other lawyers that it’s OK to admit you have a problem. There are other people who have walked in your shoes, and they’re here to help you. All you need to do is reach out and take the hand.

We all know that our legal system expects truth of its participants above virtually all other values. And as officers of the court, we have upheld that legal and ethical responsibility. But that hasn’t always been the case in our own lives. For a long time we were dishonest with ourselves and others. … We’re on a recovery journey, and each step along the way we’re gaining insight into our lives and a greater understanding of the truth. Living the truth is a daily pursuit that allows us to see the stars once again.

A toxic mix for legal professionals: pressure and perfectionism