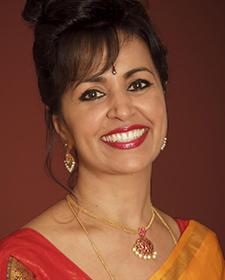 For much of her life, author and mental health activist Gayarthri Ramprasad has struggled with depression. When she was a young woman growing up in a respected Brahmin family in Bangalore, India, a heavy, powerful feeling sometimes overtook her body and mind, leaving her unable to function.

But she had no way to describe what she was experiencing.

“Even today there is not one word that means ‘depression’ in the many Indian languages,” Ramprasad said. “How do you explain what you are experiencing when you don’t have a vocabulary to understand your pain?” This lack of openness about mental illness frustrated Ramprasad, who, for more than 30 years, has lived in Portland, Oregon, with her family. “At first I was ashamed,” she said, “But as I learned more about mental illness, I knew I had to speak openly about my disease in order to heal.”

When she discovered that antidepressant medications did not improve her mental state, Ramprasad set out to discover alternative therapies that helped alter her brain chemistry and lift her depression. She writes about her experience in her book “Shadows in the Sun: Healing From Depression and Finding the Light Within,”  which was published earlier this year by Hazelden.

On Oct. 9 at 7 p.m., Ramprasad will be at St. Paul’s Fitzgerald theater as one of the featured guests on “A Celebration of Women in Recovery,” an event sponsored by the Hazelden Betty Ford Foundation and MPR’s Healthy States initiative. The event, which will be moderated by writer and musician Dessa, will also feature blogger Jennifer Matesa, whose book forthcoming “The Recovering Body: Physical and Spiritual Fitness for Living Clean and Sober,” will be published next year by Hazelden.

Ramprasad hopes that her book will spread a positive message for people living with mental illness. “There is hope and health,” she said. “People do recover from mental illness and go on to live completely functional, meaningful lives. Recovery is possible, no matter how bleak the situation.”

I spoke to Ramprasad from her home in Portland about living with depression, writing her book and the evolution of ASHA International, the nonprofit she established in 2006 to educate the public about mental illness and support families struggling with its impact.

MinnPost: What inspired you to write this book?

Gayarthri Ramprasad: My goal was to create a more understanding, compassionate world for my daughters and all of the daughters and sons of this world. As a people we have so many common threads that bind us. So many of us are focusing our energies wastefully on our differences — the differences of gender, race, sexuality, politics, mental health.

So much of the pain and suffering and loss is because we as people don’t take the time to stop and reflect and understand and embrace that we are one. What hurts me will eventually hurt you. It’s better that we stop and listen to on another and understand each other’s struggles and create a compassionate world where all existence thrives. To achieve that, part of us can’t be hurting. My hope is that this book will speak to people who struggle with mental illness, bring compassion and guidance to those who love them.

MP: You have lived with depression for many years. When was that condition first diagnosed?

GR: Before I started this journey through mental illness, I was just another person in this world who was completely ignorant about mental health issues. So was my family.

I started struggling with depression when I was 18. We had no name for depression in India. Initially, I was called a difficult teenager. Then I was called weak and hypersensitive. Then I was a nervous bride. Then, when I left for America, I was called homesick. There was always a rationale, never a true understanding of what was causing my pain.

My journey was a horrific journey. My family paid a price. I paid a price. It wasn’t until we were in the throes of this disease not once but many times over that I started to learn the words that described my condition — and what I needed to do to survive.

MP: How did you get to that point?

GR: It is a long story. After the birth of my first daughter, I suffered from massive postpartum depression. My husband and I were living in the United States then, so I took my baby and went home to India, thinking that being with family might help me feel better. But it didn’t. In 15 days I lost 15 pounds. I was begging my parents to kill me.

Stigma and shame is pervasive in so many cultures when it comes to mental health. It was that way in India. My family didn’t want to talk about what was happening to me. I felt that the truth about my illness would shatter us for many generations to come. When you say, “mental illness,” back then, my image was that of a woman running down the street in Bangalore with dogs chasing her. I didn’t want to be that woman.

I started medications during the trip back home to India. I was also administered shock treatment and psychotherapy. My in-laws even summoned a priest to come home and get rid of the demons and he molested me. And when I came back to he United States, my mother came with me. I was in no shape to take care of myself — or my 18-month-old daughter.

Once back in the United States, I was connected to psychiatrists and therapists. Did the medications help? No. They only made me sicker. When medications fail, how does a person advocate for herself? I wish I had the strength then to understand what my soul knew.

MP: Since medications weren’t working for you, what was the next step?

GR: I struggled. It took a long time for me to even become aware, to educate myself about mental illness. That started one day when I was sitting in my therapist’s office. The day before, I had unsuccessfully tried to bury myself in my own back yard. I knew then that I needed to fight for my life.

My therapist said, “I care about you deeply but I can’t keep you alive by myself. Unless you educate yourself about your disease and how to manage it, you are not going to be able to stay alive for much longer.” She was right. I knew then that it was time for me to walk away from the shame and secrecy and the silence. I needed to step into the light and accept this diagnosis.

But with time and education about mental illness, we worked through those feelings. I still am married to the same man and happily so. Together we learned that we are not alone: There are 450 million others like me around the world who struggle with mental illness.

MP: How did you learn about the alternative therapies you now practice?

GR: When I first came to the United States, I watched the show “Family Ties,” and I fell in love with Michael J. Fox. When I was in the hospital going through all this trauma, there was an intern who looked like Michael J. Fox. He made my heart flutter.

One day, he asked if I had ever tried transcendental meditation.

There’s a Buddhist proverb that says, “The teacher appears when the student is ready.” I was ready to do anything to save myself. I said, “Tell me more.”

I have practiced transcendental meditation for 25 years now, every morning of my life. It has completely transformed me. Slowly, I discovered that combining meditation with cognitive behavioral therapy and exercise, especially yoga, is effective in fighting my depression. It is an irony that I have to come from a country where two of these skills originated and I had to come halfway around the world to learn that these work in treating my illness.

Before, I thought the only way to fight mental illness was “meds and therapy, meds and therapy.” Medication works for many people around the world, but what happens when it doesn’t work? I discovered that even when meds don’t work there are so many paths to wellness. I like to say that India gave me roots. America has given me wings to fly. I am truly lucky to have these two mothers.

MP: Do these practices work for you 100 percent of the time?

GR: I still do struggle with recurrent bouts of depression. I compare it to a storm. When it hits me it knocks me down to my knees.

But now I’ve got my own wellness plan, which, when the tsunami strikes and gets me down to my knees, will help me get up again. That I think is the ultimate freedom. No matter what the darkness I know I have the light within me.

MP: Are you opposed to anyone using medications to treat mental illness?

GR: Not at all. My own brother successfully treats his mental illness with medication.

I want to get this message clear: Every person has his or her own path to wellness. My message is that even when medications work, the holistic practices I teach have universally been shown to be helpful.

These practices are not just useful for mental health and addiction. It is helpful for anyone’s health and wellness. Let’s teach our children ways of living well every day so we don’t have to get sick in the first place. When we get sick, those very same practices are going to empower us to be that much more resilient in bouncing back.

There is not health without mental health. These practices can help everybody live better lives.