“We went out into the community,” recalled paraprofessional Amina Hassan of this unusual approach. “We just knocked on doors and introduced ourselves. We told them about this program that was starting. We explained the kind of kids it was designed for and how it would work.”

That personal touch was particularly important because St. David’s, a Minnetonka-based nonprofit that provides a range of services for children and families, is seeking to gain trust in Minneapolis’ Somali community.

Autism rates are high among Somali children in Minneapolis: A 2013 study conducted by the University of Minnesota found that 1 in 32 Somali children in the study met the diagnostic criteria for autism. (The same study found that one in 36 white children and one in 62 non-Somali black children also met autism criteria.) But some members of the Somali community, perhaps hindered by cultural, language and transportation barriers, have been slow to seek treatment for their children. St. David’s west metro locations had only served a few Somali families, though administrators knew that clearly many more were eligible for their services.

This year, St. David’s, with its recognized history of effective early treatment for young children with autism spectrum disorder (ASD), has brought its ADT program to the heart of the Twin Cities Somali community, hoping to make connections and attract families that would prefer to stay closer to home. So far, the approach appears to be working: The four-hour daily preschool, which opened in April 2014 with an a.m.-only program, is now full with seven students. Organizers say that there is already a waiting list for spots in a second p.m. program, which is slated to open in four to six months.

“News about the program is getting out there,” Hassan said. “In the Somali community, a lot of our messages still get spread by word of mouth, and I think people are hearing that we are doing good work, and telling their friends that they can trust us with their children.”

The preschool is housed in a clean but nondescript light-industrial building on Summer Street NE in Minneapolis. Inside, a group of children play and interact with their teachers in an airy, almost sparse-seeming room.

The cleared-out feeling is intentional, explained mental health practitioner Pam Reigel. Too many elements in one space can be upsetting for children with ASD, who tend to learn best in quiet, uncluttered spaces. An environment that a typical person might find empty can actually be calming for an autistic child.

“If we put up ABCs in the room, kids can get really distracted,” Reigel said. “We like to introduce one or two toys at a time.”

Three of the full-time paraprofessionals in the program are Somali women. The staff also includes a speech therapist and an occupational therapist. The children, who are all boys (Mohamed said that one girl is registered for the upcoming p.m. program), spend much of the day in groups of three rotating through activities designed to focus on mental health development, speech therapy and occupational therapy.

Reigel said that integration of therapies a hallmark of St. David’s approach to autism treatment. Each week, teachers and therapists come together for a meeting where they discuss individual children’s progress, as well as ways to integrate elements of the different disciplines into all parts of the school day: “We want to treat the kids holistically, to look at each child from all perspectives.”

The preschool has one main classroom space, an occupational-therapy gym, and small room that staff calls the “calming room.” Outfitted with pillows, a weighted blanket, noise-blocking earphones and padding on the walls, it’s a space where kids who are experiencing sensory overload can go to calm themselves. 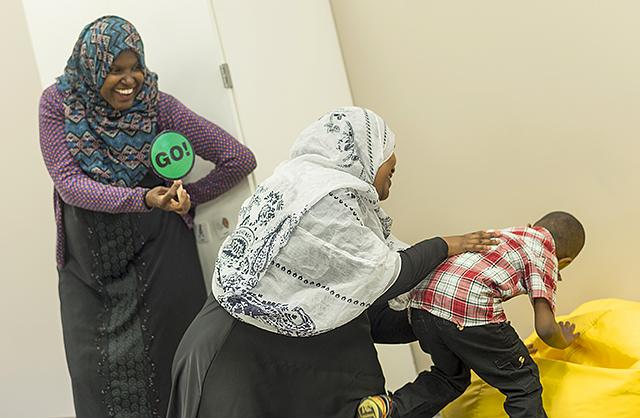 St. David’s Center for Child & Family Development/James Schwartz
In a preschool activity designed for children with autism spectrum disorder, mental health paraprofessional Amina Hassan, left, holds a sign that to signal when a child should jump into a beanbag chair. Mental health paraprofessional Ismaham Mohamed, right, assists the child in the jump.

“When kids start here,” Reigel expained, “we’ll practice going into the calming space and doing calming activities like blowing or singing a song softly or going under the weighted blanket or hugging the Dora doll.”

With a goal of eventually “graduating” some children to a more typical preschool setting — and eventually on to kindergarten — St. David’s has partnered with Children’s Choice Center, a Somali-owned day care that is located in the same building. Just as in St. David’s Minnetonka location, the Northeast Minneapolis staff hopes to establish a laddered program, where kids can move from the preschool to the day care.

The range of time children stay in ADT program varies, from just six months in some cases to as many as three years. “We haven’t moved any of the kiddos into the day care program yet,” said paraprofessional Ismaham Mohamed, “but when do that, it will be a gradual process, with one of our staff members coming along with them into the classroom.”

Four times a month, staff members conduct home visits with parents and children, helping them work through basic situations that can be difficult for children with ASD, like going to the grocery store or to the doctor or dentist’s office.

“The supporting piece is really big for Somali families,” Hassan said. “Having a Somali practitioner who speaks their language and understands their culture and can handle difficult situations helps parents a lot. It makes them understand that they are good parents. They just need the resources and the skills to work with a kid with autism.”

There is very little understanding of autism in traditional Somali culture. There isn’t a specific word or set of terms for the disorder in Somali, said Susan Berdahl, associate director of community relations, so explaining to parents how to live with a child with autism can be thorny. Organizers ran into this problem when they were crafting a brochure about the Northeast Minneapolis program. They wrote text in English describing the program and then asked someone to translate it into Somali. The resulting brochure “made no sense,” Berdahl said. “The words were translated, but they don’t have these same words. So we had to talk about concepts and simplify using common understandings.”

Working to bridge cultural divides like these takes time, but the staff of St. David’s Northeast is committed to working together and forming a strong relationship. At the weekly staff meeting, after they discuss individual student progress, teachers and therapists have started to do some casual cultural education: “We talk about Somali culture like weddings and Eid,” Reigel said. One week, a member of the group asked why so many Somali children have similar names — four boys enrolled in the program have the same first name, for instance. Staff members have developed ways to work around this issue. “We use their first names — plus an initial,” Mohamed laughed. “Somehow they all know just who we are talking about.”

Bridging cultural divides like these is a source of pride, Hassan said. She’s also proud of all that she’s learning about a disorder that so disproportionately impacts her community.

“As a member of the younger generation who has a passion to help others, this work is a really great opportunity,” she said. “Someday I hope to become an expert in the treatment of autism. I want to help the children in my community. My work here with the kids at St. David’s should help me achieve that goal.”