Sometimes the best way to solve a problem is to set it to music.

Several years ago, staff at the Minnesota Association for Children’s Mental Health (MACMH) were struggling to come up with a way to educate children about common mental health issues and break down stigma surrounding them. The association had received a grant for the project, but their early efforts weren’t successful.

“We were going into classrooms and basically just lecturing,” recalled MACMH Executive Director Deborah Saxhaug. “We didn’t feel we were getting our message across. Then, we were in a brainstorming session and Matt came up with the idea, ‘Why don’t we do a musical performance?’ It was a brilliant idea.”

The “Matt” Saxhaug is referring to is Matt Jenson, MACMH’s director of arts programming. At the time, he was working part time at the association as an administrative assistant. An actor and dancer, Jenson considered the MACMH gig to be a day job that helped support his larger artistic ambitions. His idea — to develop a musical performance designed to help children understand the struggles and triumphs of kids with mental illness — was enthusiastically supported by everyone at the association.

Jenson brought in his friend and collaborator Marya Hart, and together the two of them created what would eventually become Fidgety Fairy Tales, a series of musicals based on common folktales that explore and explain mental illness.

“Looking back, one of the best things we ever did was say to Matt, ‘Run with this and see what you can do.’” Saxhaug said. “This has been one of the greatest things we’ve ever done, and it wouldn’t be in existence if it wasn’t for Matt and Marya.”

Out of the first shows grew into a series of muscials that are performed by a troupe of professional child actors. Jenson and Hart, who became friends while working for the Minnesota Children’s Theatre Company, wrote original words and lyrics for each play, which are in part comic and serious, addressing real-life mental health concerns in a language that appeals to both children and adults.

The Fidgety company is mobile, (“Everything in the show fits in the trunk of my car,” Jenson said) and performances have been held in schools, community centers and churches. Because they are committed to making the shows accessible to as many audiences as possible, MACMH also offers performance rights to the show for a small fee. Productions have been staged around the United States and in Guam.

Earlier this month, I met Hart and Jenson for coffee, and they entertained me with stories about their creative process, and about the very serious mission behind their plays.

MinnPost: How did you get the idea for Fidgety Fairy Tales?

Matt Jenson: At the time, I was doing a lot of studying about fairy tales and how they change over time to tell different messages. I had the idea: We are trying to raise awareness about kids’ mental health. Why don’t we use these stories and these characters to do that?

At first, we thought it was going to be just this one little project where we’d have 10 performances around the Twin Cites. When the first play was over, we thought we were done and then people kept saying, “Oh this is so great.  You need to come to our school.” The project kept growing from there.

MJ: And we’re working on our seventh. 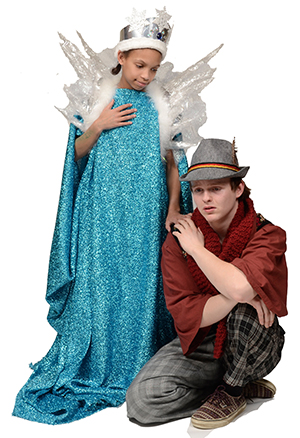 MP: Did you ever think about asking kids to help you write the plays?

MH: We worked on our first play with a group of junior high kids. We did it as a little after-school program. Our original thought was that we could do improvisation with the kids and help them create their own story. And then we realized after about five minutes that it wasn’t going to work because so many of the things we say naturally are just too stigmatizing of mental health disorders.

For instance, the kids would be improvising a little scene and grandma says to the wolf, “You’re crazy!” I’m like, “Wait a minute.” That was when we developed the style of the productions, which was to present carefully vetted language in the voice of a narrator who will stand forward and say, “Little Red Riding Hood has ADHD. That stands for attention deficit hyperactivity disorder. Some of the symptoms of ADHD are . . .”  That’s when everything freezes, and then it’s back to the fun and games with the wolf. The whole story is also conveying information but we felt we needed to get the really accurate stuff out there in a more intentional way.

MP: Why did you choose to base your plays on fairy tales?

MH: You’ve got familiar characters, familiar situations. You don’t have to spend a lot of time on exposition. Each one of these plays is about 45 minutes long. It’s made up of three short plays of 15 minutes each. You don’t want to spend a lot of time orienting audiences to the world of the play. But when you’re starting with the character of Little Red Riding Hood, story can start anywhere. So the play opens with the wolf and his buddy the crow hanging out in the middle of the forest feeling hungry. And everybody knows what world you’re in. You can make changes to that familiar story and those changes are really obvious for the audience. It helps to drive home whatever point you are trying to make.

MJ: Fairy tales tackle some really big subjects. “Hansel and Gretel,” for instance, is about child abandonment, but we all know the story and we don’t have to have it explained for us. It’s like shorthand.

MP: What’s the main message of your plays?

MH: Some schools work really hard at trying to create empathy and a welcoming environment for students and those are good places for us to go to perform because we have an audience that is primed. We’ve been to other places where there’s been no priming at all but it’s still been interesting because we’ll have a Q&A with students afterward and some kid will raise his hand and say, ‘Well, I have ADHD.” It’s kids being able to recognize themselves in the characters. The hero of each play is always someone who has a mental health disorder, so that’s pretty powerful for the kids.

MJ: That was important to us because a lot of times people with mental health disorders are portrayed as bad guys. So we wanted to show them in a positive light and also show the people around them looking at them in a positive light. Part of what we’re trying to do it to show families and friends a way to imagine what it would look like to be compassionate and supportive to a person dealing with mental illness.

MH: We’re all in this together. We’ve got tear-jerky moments in the plays, but we try to keep it light and happy and funny. We try to write stuff that we actually enjoy as adults. We try to be satisfied artistically.

MP: What are some of the topics your plays tackle?

MJ: Some of the disorders we deal with in our plays are more common than others, like ADHD, depression, anxiety and autism. When people call and ask us to come perform, those are the ones they usually ask for. Other topics include bipolar, Tourette’s syndrome and eating disorders,

MH: The Tourette’s story is one of our favorites. But Tourette’s is kind of rare, so people aren’t clamoring for it. It was just so fun to write. It has a flock of singing sheep. You just can’t beat singing sheep. 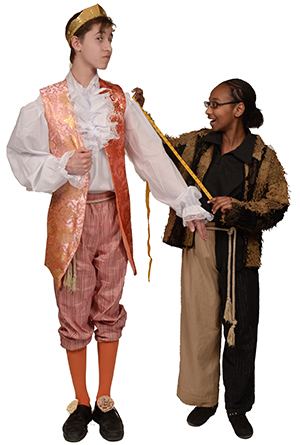 Photo by V. Paul Virtucio
Mateo Reyes as the Emperor and Asla Hashel as Yoko
the Tailor from “The Emeror’s New Clothes.”

MJ: We did “Little Red Riding Hood.” That was ADHD. Little Red gets distracted on her way to Granny’s house, but her ADHD means that she can pay attention to a lot of different things at the same time so in the end she saves Granny from the wolf. Then we did “Sleeping Handsome.”  He has depression. He was feeling so much pain that he wanted to put himself into an enchanted sleep.

MH: His mom breaks the spell by telling him that she is going to take him to get some help.

MJ: We did “Rapunzel.”  She has anxiety. So she’s afraid to leave her tower. The witches are her three anxieties who came to life. And then she makes a friend whose name is Princeton who helps her slowly over time feel comfortable facing her fear.

MH: At the end, Rapunzel gets a haircut. It’s one of the symbols of her freedom and liberation.

MJ: The  second show we wrote was “The Prince and the Pea.” That was our first autism story. Our prince was Prince Frank from the Kingdom of Asperg. He knew a lot about horses . . .

MH: … which led to a patter song about horses …

MJ:  … the queen didn’t believe he was a real prince and she tested him by putting a pea under 20 mattresses, but his hypersensitivities helped him feel the pea and pass the test.  We’re actually working on that one right now with a cast of youth on the autism spectrum. We are going to be performing that in a couple of weeks.

Then we did “Hansel and Gretel,” and that was about post-traumatic stress syndrome. The whole story takes place after the kids come back from the witches’ house. Gretel is having nightmares and reliving stuff about her time there.

MH: The topics are all important, but we still try to keep everything light and fun. It’s like watching “The Simpsons,” where there’s something the adults get and something the kids get. It makes these shows work for everybody, which is the whole point. Everybody gets it, the music is catchy, and the message just slips in.