A diligent researcher with a deep love of history, Susan Bartlett Foote decided to dig into the life of Minnesota mental health activist Engla Schey almost on a whim.

Foote, professor emeritus at the University of Minnesota’s School of Public Health, first heard about Schey during her research into the movement to reform Minnesota’s state asylums for the mentally ill in the 1940s and ’50s.

“Engla Schey is an unusual name,” Foote said, “so I noted it when I saw her mentioned in two different books that discussed the reform movement. It piqued my curiosity, and I decided to find out more.”

Foote, a former attorney, health policy consultant and Robert Wood Johnson health fellow, wanted to know just who Schey was, but cursory research turned up nothing, except that she had worked as an attendant in some of the state’s mental hospitals. That sliver of information, combined with historical documents unearthed from her former father-in-law, Unitarian minister Arthur Foote, was enough to launch Foote, wife of former U.S. senator and health policy expert David Durenburger, on a full-fledged investigation. In the end, Foote decided to write a book about Schey and the Minnesota mental health reform movement. A preview will appear in an upcoming issue of Minnesota History magazine.

“One of the joys of history research is unraveling the mystery,” Foote told me. “Engla’s story was a mystery that I felt needed to be solved.”

Earlier this month, I met with Foote in her Crocus Hill home. Over cups of tea, she told me about her in-depth research into the life of Engla Schey.

MinnPost: What inspired you to start researching Engla Schey and the history of mental health reform in Minnesota?

Susan Foote: It’s a long and slightly tangled story. My son was moving and I was helping him clean his closet. A bag fell down from a shelf and almost hit me on the head. The bag contained a wonderful old scrapbook, some speeches and reports written by his grandfather Arthur Foote, who had been the minister at Unity Unitarian Church in St. Paul from 1945 to 1970. The material concerned the mental health reform movement in Minnesota in the 1940s. Years before, when Arthur was an elderly man, my husband and I visited him in his home in Maine.

Arthur talked about Minnesota Governor Luther Youngdahl, and how they had worked together on that reform. I thought this was an interesting slice of history and I wanted to know more.

MP: So where does Engla Schey come into the story?

SF: At first, I thought the story I had discovered was only about the political connections between Arthur, the Unitarian church and Governor Youngdahl. But when I started digging into the history of the movement, this name Engla Schey began to appear in several places, including Elinor Sommers Otto’s “The Story of Unity Church.” And then when I read a biography of Youngdahl, her name appeared again. In the Youngdahl book, in the chapter about the reform movement, I read this sentence: “It all started with Engla Schey.”

I said, “What? Who is she?” I tried to look her up, but I didn’t find anything. She was this mystery woman, but yet somehow she was important to the movement to reform the state asylums. So I got on ancestry.com, and because her name is so unusual, I managed to find a little bit about her there.

I learned Engla was an attendant in the state mental hospitals. But I didn’t understand how in the world this attendant who was born in 1895 in Marshall County, Minnesota, could eventually become this catalyst for reform. It was a mystery. Somehow I knew that this was an important story.

MP: How did you manage to learn more about Engla?

SF: I had a friend Carol in Thief River Falls, which is close to Marshall County where Engla grew up. She offered to dig around in land records and local history. 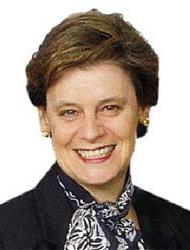 While Carol was digging up north, I was down in St. Paul, working away at the History Center.  I found some facts about Engla in Census documents. While reading through the papers of one of the Unitarian leaders, Genevieve Steefel, I found these handwritten letters. I picked one up and I thought, “I wonder who this is from?” I was reading it, and it said, “Dear Mrs. Steefel . . . ,” and I turned the letter over and it was signed, “Engla Schey.” I couldn’t believe it. It was the first time I saw her handwriting.

I just jumped out of there like there was a fire in the chair. Oh, my god. This was the first tangible piece of evidence that truly connected me to Engla. It was an original letter. And there were about nine of them. Those letters gave me a glimpse at her history: Engla was working at the hospital in Rochester when she wrote them. From the letters, I could tell where she was living, that she worked and lived at a number of the hospitals in the state.

I was just immediately taken by her frankness. These are wonderful letters: They all should be published. Engla, who clearly wanted to push for reform in the state hospitals, was writing things like, “You’ve got to watch those politicians. They’d rather take a tour of the barn than see the patients. It’s so easy to pull the wool over their eyes” — that kind of thing.

MP: Did Engla’s story end with the letters?

SF: I had the broad outlines of her life, but many questions remained. And then I started tracking downwards to see if I could find any living relatives. I located her nephew in Boston and descendants of her sister Josie in Wisconsin. I sent long letters to her relatives. It took several months to get a response.

I called a Wisconsin relative who didn’t have many memories of Engla. But she said, “My sister is coming up next week. I’ll talk to her and see if maybe she remembers something.” The relatives must have shared some information about my search.

Two days after Christmas last year, I got this beautiful email l from Engla’s nephew in Boston. We scheduled a time for a long phone call, and he shared photos and some memories from when he was a boy.

Around the same time I got this email from Engla’s great-great niece. She lives in Wisconsin. It was a really nice email and she said, “I have a lot of papers of Engla’s, who was my great grandmother Josie’s sister.”

I thought, “Oh, my god.” I emailed Carol and asked, “Do you want to do a road trip?” And we drove through a January snowstorm to look at the materials.

What we found was priceless — hundreds of pages of journals written while she worked in three different hospitals from 1946-1952. Incredible insights into the life of those who lived and worked there. Also, autobiographical stories she had written about her life.

MP: And so you made copies of everything?

SF: I brought my printer along. Engla’s family was wonderful. They had all this food ready for us. It was Engla’s great-great niece and her mother, who is about my age. She’s the grand niece of Engla. They were really gracious. She didn’t want to give me the materials, obviously, but they said we could make all the copies we wanted.

Then I went to visit Engla’s nephew in Boston. He and his wife had me to dinner. He showed me Engla’s violin from when she in the Salvation Army. He remembers her but he grew up in San Diego, and so didn’t spend a lot of time with her. He came back to Minnesota when he was a little boy in the summer and would see her then. He had a few items and some memories. Her trail does go cold after the end of her journals, the ones I copied in Wisconsin.

MP: So Engla was an outspoken advocate for reform who worked in a low-status job in the state hospitals. But I still don’t understand how she influenced so many people, including the governor.

SF: In 1946, Engla attended the Minnesota Unitarian Conference, which brought together Unitarians and people from other liberal churches from all over the state. Engla was a member of the First Unitarian Society in Minneapolis. She attended that meeting, and what we know from a report that Arthur wrote, as well as what Engla wrote about it in her journals,is that at some point the issue was raised of Minnesota Unitarians becoming involved in the problems with the state asylums.

Leaders in the American Unitarian Association had created a project they called Unitarian Advance, which meant that no longer should Unitarians sit on the sidelines and just do things as individuals, but as Unitarians they should work together to make a better world. This meeting was about that project.

I do not know why the mental hospital issue was the one that was eventually put on the table. I do know that there were a couple of articles in the paper at exactly that time saying Minnesota’s institutions were not “snake pits” or “bedlam.” So apparently, when it was under discussion, some people at the meeting said, “We have talked to people high up and they tell us that things in Minnesota’s asylums are not bad.”

And that’s when Engla stood up.

I’m crediting her as the catalyst, as she was probably the only person in the room who at that point had at least six years of experience in the state mental hospitals. She worked in the trenches, and she was passionate and fearless. And she stood up and said in pretty blunt terms — I have these words as she recalls them in her journals —  “The people who run these institutions don’t know what the patients need or want. If you want to know, go dance with a patient. Go talk to them.” When you read Engla’s journals, you realize what the conditions were that she was living and working in. You understand why she was so passionate about the issues.

MP: What did Engla accomplish by speaking out?

SF: By speaking out, she got things started. Before this meeting, Engla had traveled around the state, passing out materials about the conditions in the asylums, but on her own, she hadn’t been all that effective. She was a passionate advocate for reform, but it took her speaking to a group that had the expertise, wherewithal and credibility to light the spark that carried the issue to the next step.

Engla passed the baton to the Unitarian conference. Arthur Foote served as chair of the group that persuaded the governor to take on the issue, worked tirelessly for years to bring the issue of mental health out of the shadows, advocate for improvements and reforms in the care and treatment of the thousands of Minnesotans in them. It was the start of a journey toward a modern mental health care system in Minnesota. Engla Schey was the hero without whom this effort might never have happened.