By anybody’s standards, Anna’s life got off to a rocky start. Her birth mother tested positive for opiates and amphetamines when she was 8 months pregnant. Then, just 14 days after Anna was born, she was put in protective custody and placed in foster care. Not long after, her birth parents voluntarily terminated their parental rights.

When she was 5 weeks old, Anna was adopted by Mary and Jerry Kerr, an Edina couple who were already parents to three other adopted daughters. One of the girls is Anna’s half sister.

“Because of what had happened before and just after she was born, we knew that Anna was likely to face challenges in her life,” Mary Kerr said, “but we loved her and we wanted her and that was that.”

Anna’s emotional challenges began to manifest themselves early; by the time she was in preschool, Mary said, Anna became disruptive and oppositional. In kindergarten Anna was diagnosed with ADHD and put on medication. (Later, Anna was also diagnosed with generalized anxiety disorder and emotional and behavioral disorders. “Things began to pile up,” Mary said. “In the summer of 2012, when Anna was 8, everything started to spiral out of control. She became aggressive, violent and completely impulsive. We couldn’t go anywhere because we never knew what was going to happen. We were isolated and alone. It was a very difficult time.”

Mary, a stay-at-home mom, took the brunt of Anna’s aggression: Anna would scratch, kick and bite. Eventually the problem got so bad that the Kerrs had to have Anna hospitalized. “It was a safety issue for herself and for us,” Mary said. After this happened four times in one year, the family was at their wits’ end. “It was clear we needed to get other help.”

Help arrived in the form of Jess Holly, a crisis therapist from the Washburn Center for Children, a Minneapolis-based children’s mental health center.  Founded in 1883 as the Washburn Orphan Asylum, the center has evolved into one of the state’s leading nonprofit organizations for children. Holly’s department — Washburn’s Crisis Stabilization Program — was established in 2000 with a goal of helping children with severe mental illness avoid over-hospitalization.

Time spent in a psychiatric hospital can be traumatic for children and families. At an average cost of $2,500 a day, it is also expensive. For a lower cost, Washburn crisis therapists provide intensive services for children and families dealing with a severe mental health issues. They meet with clients several times a week, in their homes, at work, at school — wherever they are needed most.

Before the Crisis Stabilization Program was established, Holly said, “we were seeing that kids who had really intense mental health issues were doing a revolving door with the hospital: in for a couple of days and then out and then back in.” With its focused and attentive approach, she explained: “This program was designed to break that cycle.” 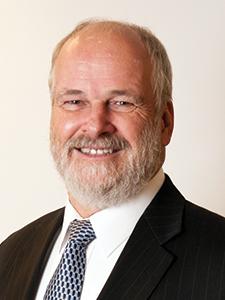 Washburn CEO Steve Lepinski said that the individualized attention provided by therapists like Holly help children and their families develop the coping skills needed to live successfully with mental illness. Crisis therapists also help connect the family with existing community services that can help them into the future.

“While this program is intense, it’s also extremely flexible,” Lepinski said, explaining that the average length of service is three to four months. “Children and their families can be worked with while still living in the community. Therapists will see a child almost every day at first if they have to. As the child and the family start to stabilize, as the clinician is able to connect them to different resources, they can eventually slowly back out and back off, allowing families to live their own lives.”

For a little over three months, Holly helped Anna and her family develop coping skills for her anger and emotional outbursts. Through individual therapy, she helped Anna realize her own impressive inner strength and her potential for success. Realizing that the Kerrs’ neighborhood school was not a good fit for Anna’s needs, a case manager at Washburn also helped the Kerrs enroll her in a school — North Education Center in New Hope — that focuses on children with emotional and behavioral disorders.

The Washburn approach helped pull her family back together again, Mary Kerr said. “Jess realized that it wasn’t just Anna who was in crisis,” she said. “It was our whole family. Once we realized that and started to work on solutions, things started to get better quickly.”

Mary believes that the months of focused treatment helped her daughter push back her fear and anger and reveal her true core of strength and hope.

“Once Anna was stable, the outbursts just didn’t happen anymore,” she said. “We’ve had some hiccups — she’s still on medication, she sees a psychiatrist — but as long as the medications are all in check, as long as Anna continues to work through her emotional issues, her ability to stay balanced is really amazing.”

And Anna, 10, realizes this, too. One day, not all that long ago, she asked her mother to take her somewhere. She knew how far she had come since her terrible year of four hospitalizations, and she wanted to show off her improvement. 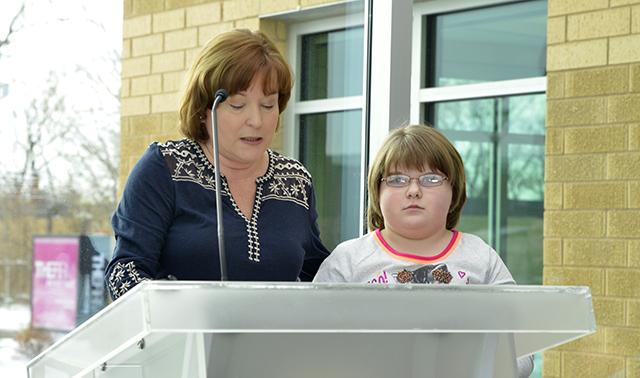 This is just the kind of outcome that mental health professionals like Holly and Lepinski hope for.

“With this kind of therapy you create happier, more self-confident children,” Lepinski said, adding that early treatment for mental disorders is key: Seventy percent of youth incarcerated in the justice system had a mental health issue that wasn’t treated when they were young.

“This kind of treatment reduces stress in families. It works to keep children out of hospitals and healthy and happy in the community. That has been our goal all along.”

On Nov. 21, Mary Kerr and Anna spoke at the grand opening of Washburn Center for Children’s new 56,000-square-foot Peter J. King Family Foundation Children’s Mental Health Building. The building, which is double the size of Washburn’s old headquarters, will house office space, classrooms and treatment rooms for Washburn’s 150 employees and the nearly 3,000 children they treat each year.

Before the event — which was attended by several public officials, including U.S. Sens. Al Franken and Amy Klobuchar — Kerr felt nervous about giving her speech. “I don’t have a lot of public-speaking experience,” she said, but “Anna is excited and not worried at all.”

Even Anna’s lack of anxiety about telling her story in public struck Kerr as an accomplishment she would have never expected of her just two years ago. She gives credit to the therapists at Washburn — and to her daughter.

“Washburn made such a difference in our lives,” Kerr said. “They taught Anna some great skills. She doesn’t have meltdowns anymore. We know her mental illness will be part of her life forever, but Anna is amazing. She’s 10 years old and she understands more than most adults about what is going on in her brain. She’s committed to staying healthy and stable, and she’s been given the tools to do that.”