Senior year of college can be a stressful time for anyone. But the stress can get overwhelming if you’re also in the process of changing your gender.

Just ask Jens Pinther. Bright, funny and charming, the creative writing major from Duluth is an honors student at Augsburg College who’s editor-in-chief of student newspaper the Augsburg Echo. He’s active in campus politics and also writes his own blog, Jensgender, where he updates readers on his transformation (fueled by weekly injections of testosterone) from biologically female to male.

Pinther isn’t the only young person to make a gender transition while in college — in fact, more and more young Americans are adjusting their gender identities in their teens and 20s — but combining significant hormonal changes with significant life changes can at times feel like too much to handle.

“Sometimes I get mad at myself for being overwhelmed,” Pinther said. “And then I remember, ‘Oh, yeah. I’m thinking about graduating and finding a job, plus I’m changing my body and changing my identity and running this blog and actively working for change.” He pauses for a breath and laughs, “and I’m trying to grow a beard. That’s a lot of effort. Sometimes I have to stop and appreciate that I am going through a lot right now. Even if it is going really well, it’s still a lot.”

“A disproportionately high percentage of trans individuals — 41 percent — have attempted suicide [PDF],” Grewe said, and many face discrimination at home, at work and in society at large.

The late teens and early 20s are a time of great transition for any young person. Changing a gender identity, while it may feel essential to the individual, can also be a great source of stress.

“Many college students face the expected stressors of a higher work load, of being away from home for the first time, of having to work to support themselves,” Grewe said, “Changing your gender identity, while it can be a freeing experience, can also be incredibly anxiety producing. This experience can affect young people’s mental and physical health.”

At Augsburg, Grewe’s job is multifaceted. “My role on campus is to work to provide support to the LGBT population on campus,” he explained. “I help with recruitment and retention. I also help with support around identity development for students, and help educate the community at large around gender identity and sexuality.”  A growing number of colleges and universities around the state — including six schools in the Twin Cities — employ staff members in similar roles.

Pinther came to Augsburg publically identifying as a lesbian female. He had thought about whether he was transgender in high school, but by his sophomore year in college, it became overwhelmingly clear that he really was a male. He talked to his closest friends, met with Grewe, selected a new name and eventually went through a multiweek therapy program at Reclaim, a Minneapolis organization that offers counseling for LGBTQ youth and families and training for health-care practitioners. 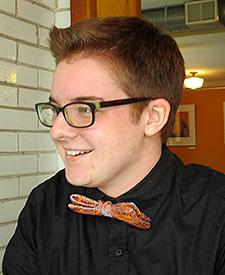 In April 2014, Pinther announced his gender transition to his hundreds of Facebook friends.

“I was really scared to come out that way, but in the end I got overwhelming support,” he said. “I already told some of my closest friends before going on Facebook so it wasn’t a complete surprise to a lot of people. But even people I didn’t expect to get it were actually very supportive. And that was really, really, really validating.”

In 2013, over Thanksgiving break, Pinther told his parents that he is transgender. He also told them that he was planning on starting testosterone therapy and wanted to live his life as a man.

“At first, my parents said, ‘Wait a few years,’ ” he recalled. “But I told them I feel like college is the right time for me to do this. I know my brain isn’t fully developed yet, but I do know that I don’t want to transition next year when I’m at a workplace. I want to look how I feel before I get a full-time job. That’s really important to me.”

After some serious family discussions, Pinther’s parents gave him their full support. They wanted their son to know that he was loved and he wasn’t alone in his journey — and they wanted him to stay alive.

“My really good friend from high school was also a trans guy and he killed himself this last February,” Pinther said. “That changed a lot of stuff. After that, my parents’ attitude was partially, ‘Do whatever you need to do,’ and partially, ‘What if you end up like him?’ because my friend came out a year before I did and he was living as a guy for a year before he died. So my parents were pretty scared when they heard about what I wanted to do.”

Like his parents, Pinther was shaken by his friend’s suicide. Pinther has been diagnosed with depression, but he’s always insisted that his down times were unrelated to his struggles with gender identity. Lately, though, he has started to look at his mental health from a different perspective.

“I know I have depression,” he said, “but I don’t always like to think that the reason I’m depressed is because I’ve been trans my whole life and I can’t handle it. But I’m coming to see that my depression and my gender issues aren’t completely unrelated. I almost came out about being trans earlier this year but I chickened out. After that, I got really low and I didn’t notice the correlation until my therapist said, ‘Are you sure there’s not reason why you’re low right now? I think there might be a connection.’ I had to agree.”

For Pinther, college has been such a supportive place that there are days he has a hard time imagining life in the real world.

“It’s a welcoming, protective bubble,” he says of Augsburg. “It’s a place where for the most part I feel safe and accepted. I know once I graduate that’s not always going to be the case.”

One good example of what makes the “bubble” so accepting for a transgender person like Pinther is Augsburg’s “preferred name” system. With this system, he explained, students can choose the name they want to be known as, even if they haven’t yet changed their legal name. The student’s preferred name then shows up on class rosters.

Another practice that helps make life easer for people whose preferred gender isn’t easily identified is known as “preferred pronouns.”

“The first week of classes is essential to the whole semester,” Pinther said. “You make your introductions then and most professors ask students to say their name and major. Some professors say, ‘Tell us your preferred pronouns.’ That is super cool because that opens the door for anyone who wants to have that conversation. I was in a poetry class where the professor began the class by saying, ‘Say your name and your pronouns.’ I was the last in the room to speak and I was like, ‘I’m Jens. I just started testosterone and hopefully I’ll have a mustache by the end of this class,’” Pinther laughs again. “I was just really open and lighthearted about it. The professor gave me the opportunity and I ran with it. I guess that’s what I’m doing in the rest of my life, too.”

By taking the opportunity to make a gender transition in a place where he feels safe, Pinther hopes he will be able to emerge from college comfortable in his skin and ready to take on the world.

“I know I’m young, but I also have lived with myself for 22 years and I know what it’s like to feel uncomfortable for almost that long,” Pinther said. “I don’t want to feel that way anymore. I am old enough to make this decision for myself and that’s what I’m doing. This is exactly the right time for me.”