In the months leading up to the birth of her first child, Blair Shackle tried to do everything right.

“I went by the books,” she recalled. “I carefully monitored everything that went into my body. I was completely focused on my baby’s health and preparing to welcome him into the world.”

But what Shackle, a blogger and digital marketing consultant, wasn’t prepared for was the crippling case of postpartum psychosis that descended on her after the birth of her son, River Robert. Not long after she and her husband, Bryan, took the baby home from the hospital, Shackle began experiencing crippling anxiety, panic attacks, confusion, insomnia, delusions and thoughts of suicide.

Just nine days after giving birth, Shackle, daughter of former KARE-11 anchor Joan Steffend, was back in the hospital, undergoing emergency treatment for her psychosis. She was released less than two days later, and began the long process of recovering from the traumatic experience.

With nearly a year of recovery under her belt, Shackle, 30, is focused on helping other mothers facing a range of postpartum mental-health issues. On her blog, Blair Schackle.com, she’s writing about her experience with postpartum psychosis, a rare-but severe mental disorder (according to Postpartum Support International, postpartum psychosis occurs in approximately 0.1 percent of births) that usually appears within two weeks of giving birth. Her goal, Shackle said, is to provide support and hope to other new moms.

Shackle, who works out of her St. Louis Park home, spoke with me earlier this week while River took his afternoon nap.

MinnPost: How long did it take you to recover from your postpartum psychosis?

Blair Scheckel: My son is 10 months old today, and I believe that honestly I still am in recovery. I am a first-time mom. Over the months I’ve learned that the first year postpartum is really about getting to know yourself again as well as learning how to be a mom and learning how to understand your baby. These are three very important things, a trifecta.

MP: After your son was born, how long was it before you started to notice that things were heading in the wrong direction for you emotionally?

BS: There is no doubt in my mind that I needed to get help within two or three days after River was born. First of all, I didn’t sleep for nine days, which is a huge problem for anyone, not to mention someone who’s just given birth. Everyone says that you don’t sleep when you have a newborn, but you do need to have at least some rest. I wasn’t getting any rest at all for nine straight days.

MP: Was your psychosis triggered by specific incidents surrounding your son’s birth? 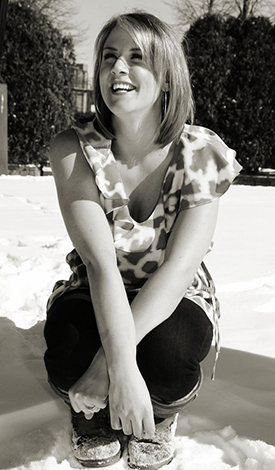 BS: I am an anxious person by nature. When I gave birth to my son, the doctors were concerned that something was wrong with him because he only weighed 6 pounds even though he was full term. In my heart, I never felt there was anything wrong with him. I always felt like, “That’s just my baby. I guess I make smaller babies,” but I was so anxious that I wasn’t able to listen to my inner wisdom. I’d lost all confidence. Eventually, River was declared healthy and we were sent home.

I thought things would be better at home, but it only got worse. I wasn’t sleeping. I chalked it up to the baby blues, which a lot of women do. But I was overwhelmed. There are no classes, no baby books, no blogs that you can read that will actually prepare you for the immediate and massive life change you are going to experience when you have a baby. I felt like I was without a guide.

I was coupling a severe lack of sleep with this new life change. Those two things collided and exploded. I developed a very strong sense of anxiety around everything. I was concerned about the smallest, most improbable things. I believed that my son didn’t love me, which is very confusing and wrong because when I was having those thoughts he was just 4 days old. I thought, “What’s going on? He’s crying all the time. I must be doing something wrong. He doesn’t love me.”

MP: Did your family notice your mental state?

BS: A few days after we got home from the hospital, my mom and dad had a gathering to welcome the baby, a casual family barbecue at their house. At some point, I broke down sobbing. I was so exhausted. I said to my family, “I think I need to go to the hospital and get some rest.” They said, “Are you sure?” Then I backed down and said, “No. I’ll be fine. I’ll just wait it out.” But in actuality this was a nudge from the universe to say I needed to get to a hospital.

I went home and tried to take the natural approach to dealing my mental illness. I went to my acupuncturist. I took some herbs to help me sleep that were compatible with breastfeeding. I figured I had to do everything right for the baby. The only problem was I forgot to take care of myself, which you have to do before you can take care of anyone else. It’s like they say on the airplane: “Put on your own oxygen mask on before you put on someone else’s.”

MP: What eventually sent you to the hospital?

BS: Everything built up and it was like I popped my cap and I could not screw it back on. I was so wound up. I knew there was something definitely wrong with me and I didn’t know how to explain my feelings to others.

Nine days postpartum I had an episode in the middle of the night where I was seizing and incoherent. My husband and my mom were trying to help me. I was shaking uncontrollably and crying. I couldn’t calm down. We had to call 911. I needed immediate assistance.

I was in the hospital for maybe 36 hours. I was put on some pretty heavy doses of sleeping medication so I could just get some rest. I slept for about 15 hours, then I was released. Before I was hospitalized, I was suicidal. I did not see a way out of my situation. That was a huge red flag for my parents and my husband to get me help.

MP: What was the next step in your recovery?

What it took for me to really heal is talk therapy. At the beginning of my psychosis, I was put on an antidepressant, but it made my symptoms worse. I’m one of those rare people where the antidepressant did not function well with my body chemistry. At the time it made me feel more suicidal. I do not judge anyone’s decision on this issue, though. I did take an anti-anxiety medication for a time. I went to an amazing naturopath who helped me rebalance my progesterone through supplementation and diet and sunlight and exercise and breathing. I also saw a therapist at the at the Postpartum Counseling Center.

MP: What inspired you to go public with your story?

BS: I’ve always been a really private person. But after this experience, I decided to share my journey in the hopes that: a) new mothers won’t feel shame about what they’re going through, and, b) people will understand that if they are going through something like this it is OK and it is going to get better.

MP: Do you have advice for expectant parents?

BS: Just as important as writing a birth plan is writing a postpartum plan. Maybe in some ways it’s even more important. I’m not telling moms to anticipate that they will have problems postpartum, but it would help to have a plan that is designed to say, “Here’s what I want and hope for after my birth. Here is who will speak for me and help me if I am feeling ill and can’t advocate for myself.”

Raising a child is a tribal job. It’s not easy to do it by yourself, especially I you are feeling ill. I really want to help others. I am training to become a postpartum doula. I am also working on getting my yoga teaching license. Practicing yoga really helped me through my recovery.

MP: And what about the friends and families? If they suspect a new mother is suffering from postpartum mental health issues, when should they offer help?

BS: When I was in the thick of my psychosis, nobody but my close family members asked me anything about what was happening. Maybe I was really good at hiding what was going on, but I think that most people just felt uncomfortable talking about it. Now it’s my mission is to say, “If you know someone with a new baby who appears to be struggling, just interject yourself into her life.”

If you see a friend who’s just given birth and things don’t seem to be right in her world, come over to her house and be a figure in her life. Say, “I am going to watch the baby for a bit so you can get some rest,” or, “I’m going to drive you to the doctor and take care of your baby while you get the help you need.”

I think our culture values autonomy too much. The modern mantra is, “I can do it all.” Maybe we need to take a hint from our ancestors. We should all come together and care for new babies — and their mothers — together.

I owe so much to my family members. My parents took me and my husband and our baby into their home. My sister took off three weeks of work unpaid to help me. These were the most selfless, amazing gifts I could ever ask for.