It’s 3 p.m. on a sunny winter afternoon, and the Seward Community Support Program (CSP) on Minnehaha Avenue in Minneapolis is hopping. There’s music on the radio and people are playing cards, dice and pool. The program’s main room — a large, open space — is filled with café tables surrounded by chairs, and groups are clustered about, talking animatedly or just sitting together in comfortable silence. One man wanders the room aimlessly. Another group clusters near the large front windows, telling jokes and laughing.

On the room’s perimeter are a modern, well-appointed kitchen, a computer lab, an art room stocked with supplies, a music room with drums and other instruments, and several private meeting spaces. In the back is a pool table and more meeting rooms.

Six days a week, Seward CSP is open from noon until 5, and so far on this day a little over 50 members — Hennepin County residents diagnosed with serious mental illness — have stopped by to hang out with friends, get assistance with paperwork, take a nap in a chair, attend a group support meeting or eat the hearty snack — actually more like a meal — that’s prepared and served by members every day.

The day’s snack was homemade soup, said Michelle Gricus, a clinical supervisor for Mental Health Resources (MHR), a nonprofit that has been providing community-based mental health services in the county for nearly 40 years. “During the day, there are usually plenty of people here,” she said, adding, with a laugh, “but peak time for visitors is at 2:29 sharp — when snack is being served.”

“Our services are on a continuum, from programs for people who are coping really quite well to people who are really, really struggling and need the highest level of intensity of care,” explained Ann Henderson, MHR vice president of clinical services. “We offer a full menu of options, and Seward CSP is one of them.”

One of six such programs in Hennepin County, Seward CSP has been in its current location since 1996. These community centers were established in the 1970s in response to the closure of state mental hospitals; the idea was to provide safe gathering places for people with chronic mental illness who, after spending years living in institutions, were being re-integrated into the community. 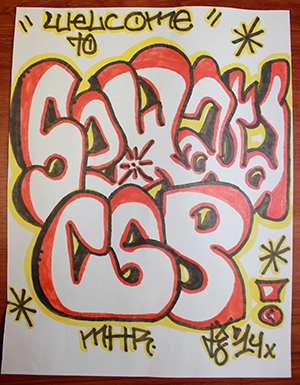 To become a member of Seward CSP, a person must be an adult residing in Hennepin County with a diagnosis of schizophrenia, major depression, bipolar disorder or borderline personality disorder. Potential members visit the program once or twice before joining and then schedule an intake appointment with MHR staff. Once a person is approved to become member, CSP programs and services are offered free of charge.

Many members’ social lives revolve around the center, Gricus said: “Some folks have been coming here for a long time. It is their primary social support. The people who come here have up and down days. Members check in on each other and provide support. It’s an important place for them, a true community.”

On a typical day, Seward CSP is staffed by three MHR employees. Other MHR staff have offices elsewhere in the building. Members can request informal counseling sessions or get support tackling the mountains of paperwork that often accompanies life on disability.

But while plenty of important business gets done every day, Seward CSP is also a place for fun: The program sponsors a basketball and softball team, hosts monthly themed dinners and ongoing field trips, and organizes a popular annual camping trip, where members spend two nights sleeping under the stars for just $10.

Mary, Dan and Diane are all longtime Seward CSP members. (Citing privacy concerns, they asked to be identified by their first names only.) On this particular day, Mary and Dan sat at a table in the main room. Diane, who often volunteers to make and serve snack, bustled around nearby, tidying up the kitchen.

“I’ve been coming here for 10 years, ever since I retired,” Mary said. “I stop in a couple of times a week. I sit and chat. I go to women’s group and the mental health group. There are good people here — the staff and the members.”

“I come here two to three times a week,” he said. “I always have a snack, sit with a friend and talk. Sometimes I go to men’s group. This is a good place for me. The more people you have in your life, it feels pretty good. The more friends the better.”

Diane said she finds satisfaction in cooking the daily snacks for her fellow members. “I learned to cook when I lived in a group home,” she said, briskly wiping down the kitchen counter. “Right now, I live in a stressful environment. Coming here is a way to get away from that. I am here four to five days a week. If it wasn’t for this drop-in center, I’d probably be in the hospital.” 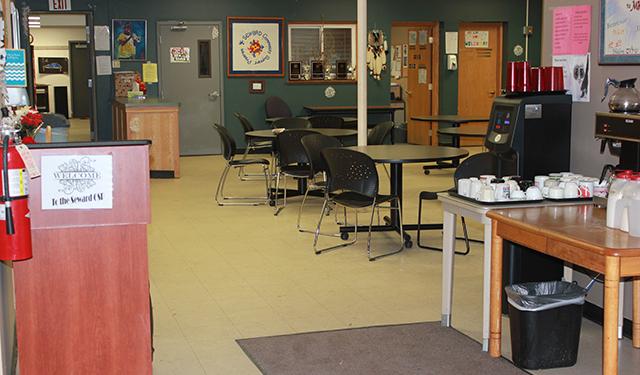 Living with significant mental illness can be hard, especially when people don’t understand the kind of effort it can take just to make your way in the everyday world. Dan, Diane and Mary said that there is something unique and comfortable about spending time with other people who have been diagnosed with mental illness. Seward CSP is a place they can do that.

“Here we can talk about our mental illness if we want to,” Dan said, “but we can also just be ourselves. We’re friends. We don’t judge each other.”

Diane agreed. To her, Seward CSP feels like its own unique world, where members call the shots, volunteering in key positions like kitchen staff and welcome committee, serving on the member advisory board and mediating disputes.

“If we have a problem with each other, we try to work it out by ourselves,” she said, with a shy smile. “You can walk in here and not get judged for who you are or how you act. As a whole, we don’t focus on our mental illnesses. And that’s good for a change.”