In 1969, when Walk-In Counseling Center was founded, Minneapolis was a regional hub for the burgeoning youth movement. The city had become a gathering place for young people who had left their homes to create new lives. Those new lives were sometimes accompanied by trauma — Walk-In was created to address that very problem.

“Minneapolis was its own little Haight-Ashbury,” explained Mary Weeks, Walk-In Counseling Center’s executive director. “Our program was a product of the social unrest of the late ‘60s, early ‘70s, the youth counterculture movement, the drug explosion. At the time, there were a lot of runaway and homeless youth in the city. A group called Psychologists for Social Action held a meeting and somebody stood up and said, ‘Anybody who wants to start a walk-in mental health clinic, meet in the corner.’ That’s essentially how we started.”

What resulted out of that spontaneous corner meeting is one of the nation’s oldest and most respected walk-in counseling centers, a 45-year-old program that offers free private therapy sessions five days a week to anyone who walks in the door. Since the beginning, Walk-In’s counselors have all been volunteers, trained mental health professionals who donate time to staffing the clinic. (Walk-In also employs six paid staff members.)

Many in the Twin Cities mental health community see volunteer work at Walk-In as a badge of honor, said Tracie Huhn-Carr, Walk-In Counseling Center’s director of development and communications. “Therapists know about Walk-In. It’s seen as a prestigious thing to have been part of the Walk-In family at some point in your career. There’s something special about this place. When you can say you’ve been part of it, it kind of vouches for you in a way: You’re legit. You’ve been a part of something really awesome.”

Walk-In’s main office is still located in its original space, an old converted house at 2421 Chicago Ave. South in Minneapolis. The program also runs two satellite locations in St. Paul; at Family Tree Clinic at Marshall and Snelling Avenues, and at Neighborhood House on the city’s West Side.

Last year, the clinic served 1,800 clients in its three locations.

“Our philosophy remains, ‘Free, no-barriers, no appointment. If you come you will be seen,’ ” Weeks said. Though the average age of Walk-In’s clientele has changed from the early days, when the clinic served mainly transient teens, she said, “Our values have not changed much since our founding. If you walk in, you will be served, no questions asked. We still continue to provide an important service to the community.”

In many ways, Walk-In’s client base has shifted to reflect the demographics of the Twin Cities, Weeks said. “The teenage population is one of our smaller groups these days. Our biggest user group now is people in their mid-20s to mid-40s.”

“About 35 percent of the people we see are people of color,” Huhn-Carr added. “We are about 50-50 male-female.” While Walk-In clients do not have to give a name or an ID card to be seen by a counselor, the clinic has conducted some informal surveys to better understand the population it serves: “About half of the people we surveyed last year had health insurance, half did not. Around 60 percent live in single-person households.”

Most Walk-In clients are low-income, Huhn-Carr said. While many report having access to health insurance, they say they have a hard time meeting the annual deductible or paying a co-pay: “Somewhere around half of the people that come here are reporting annual incomes of less than $20,000 a year for their entire household.”

As Walk-In Counseling Center moves closer to celebrating 50 years in operation, organizers remain committed to one founding concept: free care. This means that no insurance is accepted.

Since the Affordable Care Act has made health care coverage available to more Minnesotans, this commitment has proved tricky for other free clinics, like Minneapolis’ 47-year-old Neighborhood Involvement Program (NIP), which closed its doors earlier this winter. Mental health clients formerly served by NIP’s counseling programs were referred to Walk-In. Many have made the switch.

Will Walk-In be able to survive post-ACA?

“That was the big question from our funders and donors,” Huhn-Carr sad. “In the last couple of years, people have been asking, ‘Now with the ACA, everybody’s going to have mental health care coverage. Will Walk-In be needed?’ ”

What Walk-In organizers believe is that many of the reasons that their clinic was founded in the first place — financial barriers, clients’ desire to remain anonymous, no wait for an appointment — remain relevant to the population they serve. So far, donors continue to agree with this premise: Funding remains strong, and Walk-In’s directors attest to the program’s health.

“Sure, many people now have access to mental health care, but with that comes significant barriers like deductibles, premiums and co-pays that Walk-In doesn’t have,” Huhn-Carr said. “And then there’s the anonymity. Yes, there’s a confidentiality that goes with counseling, but let’s say that someone wants to see a counselor but doesn’t want their spouse to know. Or their probation officer.  Or a teenager who doesn’t want to tell his parents that he’s struggling with you-name-it in order to access their insurance coverage. While the Affordable Care Act was great for improving access to care for many Americans, we believe that the barriers that have made Walk-In needed for 45 years still exist for our client population.”

‘The ER of mental health’

On a typical day, anywhere from as few as four to as many as 12 people will meet with counselors during open clinic hours, said Lori Zook-Stanley, clinic director.  Counselors work in a team, led by a clinical director.

“It’s important so say that the people who come here are just like anyone else,” she said. “We all suffer. We all can benefit from therapy. Some people come here with relationship issues or concerns like, ‘I’m struggling with anxiety or depression.’ Lots of people come in with histories of trauma. People come in with substance abuse. Some people come in who have been diagnosed with a more significant mental health difficulty like schizophrenia or bipolar. They’ll say, ‘Oh, my gosh. I’m terrified. What is going on with me?’ Or, ‘I’ve had this diagnosis for a long time. I have lots of people working with me. I just need someone to talk to right now.’ ” 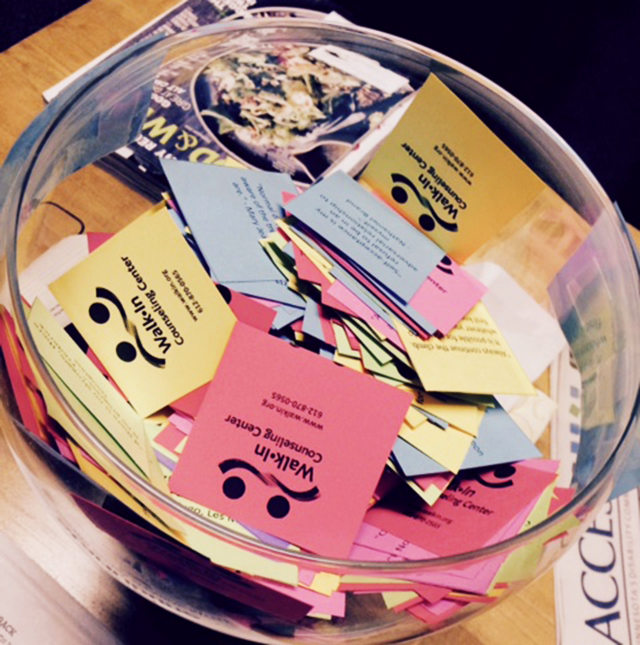 MinnPost photo by Andy Steiner
Tracie Huhn-Carr: “While the Affordable Care Act was great for improving access to care for many Americans, we believe that the barriers that have made Walk-In needed for 45 years still exist for our client population.”

That sense of not knowing who will come through the door next is exciting for many members of Walk-In’s mental health team, Zook-Stanley said.

“Some of us really thrive on the urgent cases,” she said. “A board member was here once and said, ‘This is the ER of mental health.’ I thought that was a good description for some shifts. Things can get pretty busy with many factors demanding your attention. But it’s not that way all the time. Usually our cases are more of a triage: ‘What do you need right now?’ ‘Are you safe?’ ‘Are there referrals we can get you?’ ‘Can we get you a place to stay tonight?’  ”

If the waiting room is full, counseling sessions can be as brief as 15 minutes, with a follow-up appointment scheduled for a later time, but on most days, sessions are 45-60 minutes long.

The staff’s commitment is to see everyone who walks in the door.

“During the day, if someone comes in five minutes ‘til closing, we’ll say, ‘Is there any chance you can come back tonight?’ ” Zook-Stanley said. “If they say, ‘No. I can’t,’ then we’ll sit with them, but it would be a shorter triage session and then try to hook them up with someone for a follow-up session.”

Walk-In’s counseling teams are typically made up of practicing therapists, social workers and psychologists, as well as students completing their degrees. Some are retired professionals who simply wish to give back to the community. In the break between counseling hours, the team meets to discuss the clients they’ve served that day, and to suggest alternative treatment approaches.

“One of the cool things about Walk-In is each team is a multidisciplinary,” Weeks said. “I think it is unique to have that ability to consult with other therapists. In a more typical working environment, that doesn’t happen. Through their work here with people in crisis, our volunteers are building skills they can bring into their other practices.”

It’s also important to remember that not all Walk-In clients are in crisis, Huhn-Carr said.

“I think sometimes it just takes people a long time to think about counseling before they can actually get the nerve to go. The reason the walk-in nature of our services is important for people like that is because they might lose their nerve if they have to wait two weeks for an appointment. In a staff meeting earlier today, the volunteer coordinator said that she really sees Walk-In as being here for the client in their own right time. That might be crisis. It might just be that they’re finally ready. Or it might be, ‘I’m not sure if I’m ready for therapy yet. But I’m going to put my toe in the water and check it out.’ Everybody needs help sometimes. And that’s what we’ve always been here for.”