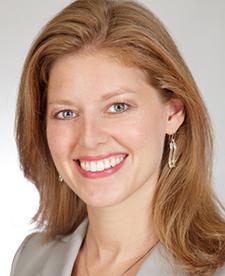 When she was working as a psychologist in a Twin Cities clinic, Lisa Herman heard the same question all the time.

“My patients would ask me,” she recalled, “ ‘Can I just call you? Can we just talk on the phone? I don’t have time to make it into the clinic.’ ”

Herman, Psy.D., knows all too well where her patients are coming from. As a new mother, she understands that there are days when making extra time — even for something as important as therapy  — feels nearly impossible. But she also believes that many people could benefit from mental health care.

Inspired by her patients’ requests for a more flexible approach to treatment, Herman began looking for ways she could give people the help they need in a format that worked with their busy lives.

She’d heard about popular online therapy sites like Breakthrough, and was intrigued by their use of technology. After researching the legal and ethical ramifications, she decided to go into private practice online, hanging up her e-shingle by creating her own website, Dr. Lisa e-Therapy. Today, Herman provides remote therapy sessions with clients online, on the telephone or using the video-conferencing site Skype. She offers appointments on weekdays, weekends and evenings. Her client list is small, but growing.

Herman is hoping that her approach will reach people who always thought that therapy just wasn’t for them. She wants to work with busy parents who can’t afford child care, workers whose schedules don’t allow for time off, people concerned about privacy, or even those whose social anxiety makes face-to-face meetings feel paralyzing.

“To go to a doctor’s appointment, at best, it’s 15 to 20 minutes driving each way,” Herman said. “You have to take time off work. You have to take the kids out of school. You have to be brave enough to venture out of the house. It’s hard to get appointments on nights and weekends. The market is there. So I decided to go for it.”

Start of a trend?

Herman isn’t the first — or only— psychologist in Minnesota to take her practice online, said Angelina M. Barnes, executive director of the Minnesota Board of Psychology. In rural areas of the state, where psychologists and psychiatrists are few and far between, some larger hospitals and medical groups provide e-therapy through encrypted hookups in a clinic setting. Still, solo practitioners like Herman are relatively rare: To some extent she and her patients are working in uncharted territory.

“The state of Minnesota doesn’t yet have any laws or administrative rules that strictly prohibit or speak to psychological practice online,” Barnes said. “In general, the board has always said that telepsychology must be practiced within state boundaries. In all aspects, we treat it the same way as we would treat-face-to-face practice. The same rules apply.”

In Herman’s practice, a typical teletherapy appointment has some of the trappings of a classic face-to-face therapy session, with some important differences. If the session is a videoconference, Herman sits in her basement therapy office, facing her computer screen. The room has soothing art on the wall and a bookcase filled with books. When a patient dials in for his or her appointment, Herman puts on her headset (this assures privacy) and answers. Other appointments take place on her office landline. Occasionally she’ll conduct a session via email.

Sessions last the typical 50-minute therapy hour, for which Herman charges $105, payable via PayPal or credit card. Half-hour sessions cost $65. For now, all of Herman’s patients are self-pay; insurance has yet to cover teletherapy, she said, except in situations where geography makes it impossible for a therapist and client to meet in person. Since Herman’s independent therapy practice is not aligned with a major health provider, insurers so far have not reimbursed her clients for her services.

“I knew that would be the situation,” Herman said, “so I lowered my prices to accommodate that. If somebody were to come see me in a clinic, my charge would be $180, maybe more, depending on the diagnosis.”

‘A little glitch is OK’

Sometimes, e-therapy sessions have hiccups that don’t happen when a patient and therapist meet face-to-face.

“In a few ways, it is different from traditional therapy,” Herman said. “You can’t get around that. Technology can be funky. When I’m talking through Skype, sometimes the feed is in slow motion, or there is a glitch in the wireless network. It’s not the same as it is in person, but when the people you’re working with know that, it is not a big deal. For some people, this setup is so much easier for their life that a little glitch is OK. It kind of evens out.”

Not everyone believes that taking the practice of therapy online is a good move.

“There are camps within the field of psychology that say, ‘This will never be the same as face-to-face practice,’” Barnes said. “You don’t get the same body language cues. If you aren’t experienced, you might not know that lighting matters, that good eye contact matters. There are groups of people in the field who would say that teletherapy does not provide the same level of service, that it is not good for patients.”

Elizabeth Super, a psychologist who has practiced in Minnesota since 1977, said that she believes telemedicine can deliver the same level of service as face-to-face therapy. She said that the world is changing, that people are becoming more adapted to living life remotely, and that psychology needs to evolve to address that truth.

“I think that people who are afraid of teletherapy are making assumptions that client and therapist can’t be really relating in this format,” Super said.  “I believe e-therapy it is another way of relating that can be just as powerful as face-to-face interaction. It is a different way of relating, no better or worse than treating a patient in person.”

Last May, the Minnesota Board of Psychology hosted a teletherapy conference, Barnes said.

“The conference discussed best practices and walked through important provisions like confidentiality, checking to see if you have encryption on your system, protecting and storing electronic health records, including text messages and emails,” Barnes explained. One major concern is patient privacy. Skype is a third-party company, with records that may be accessible on the cloud. Using Internet-based products to conduct therapy brings up all sorts of new ethical and regulatory issues, Barnes said:  “We still need to catch up to the technology.”

The Minnesota Board of Psychology has not taken an official position on telepsychology, Barnes said, but there are certain types of cases or diagnoses that she believes are not well suited for online therapy, including, “high-risk cases, like someone who is at-risk for self harm or has suicidal ideation. What if the call was dropped or the wireless connection went down? In those cases, a therapist needs to be right there with the patient.”

Herman, who is licensed to practice psychology in Minnesota and New York, sees only patients in the state of Minnesota. On her website, she posts her curriculum vitae, licensures and professional memberships. She also posts a privacy policy and complies with Health Insurance Portability and Accountability Act (HIPAA) standards. (“I’ve had a lawyer review my site,” Herman said.)

She explained that though there are some patients (she requires all to have a screening telephone conversation before beginning therapy) whose psychological histories make them a bad match for teletherapy, she believes that for many patients, online services are as helpful as those she has provided in person.

“The experience my teletherapy clients have is very similar to what therapy is like in a clinic,” she said. “It’s not face-to-face, but it is pretty darn close.”