Some people suffer from an unrelenting, inescapable form of depression that resists all common forms of medical treatment. In the not-so-distant past, the only remaining treatment option was electroconvulsive therapy (ECT), a procedure in which electric currents are passed through the brain, causing a brief seizure.

In many cases, ECT worked to jolt patients out of depression, but the side effects of the treatment, including memory loss, confusion, fatigue and nausea, made it a less-than-perfect option. In recent years, another treatment for major depression has gained acceptance. Known as transcranial magnetic stimulation (TMS), it is a noninvasive procedure that uses a magnetic field generator or “coil” to produce electrical currents in the brain that stimulate activity in the areas responsible for depression.

Recently, physicians in the University of Minnesota’s department of psychiatry have begun to treat patients with severe depression using a new deep TMS machine, manufactured by an Israeli company called Brainsway.

The University of Minnesota’s new TMS clinic, located in St. Louis Park, is staffed by a team from the university, including Brent Nelson, M.D., a psychiatry resident completing a research fellowship in neuromodulation through the MNDrive research initiative. Nelson, who worked on the project with other members of psychiatry faculty, including assistant professor Suzanne Jasberg and Kelvin Lim, vice chair for research,  is excited by the therapeutic possibilities TMS presents.

“We literally just opened our clinic doors on Monday,” Nelson said. “We are brand, spanking new. Our clinic operates the only deep TMS machine in the Upper Midwest. The possibilities here are exciting, both for patients and their physicians, who before felt like they had run out of treatment options.”

I spoke with Nelson earlier this week. He explained the basics of TMS treatment and his commitment to finding alternatives for people with serious depression. Treatment with TMS is more common on the coasts, Nelson said, but he hopes that with his clinic’s launch it will gain acceptance in this region.

MinnPost: What patient population is TMS most appropriate for?

Brent Nelson: There is a large group of people who have been through many different medication trials and psychotherapy and still end up in a vegetative depression that is an immediate threat to their lives. 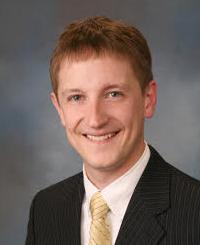 Courtesy of the University of Minnesota
Dr. Brent Nelson

TMS has been approved by the FDA for treatment of recurrent or severe major depressive disorder. It is not approved for the treatment of psychosis or for a person with active suicidal ideation. Before trying TMS, our clinic wants a patient to have had four medication failures with two being from different classes of medication. We also want patients to have failed a full trial of psychotherapy. At our clinic, we’d also like to see people who’ve done medication and psychotherapy together.

The folks we see in our clinic have been through a number of medication trials. They are pretty discouraged. They have suffered from depression for years. They are very well informed and are ready for another option, and for a number of reasons they aren’t excited about trying ECT.

MP: What does a TMS machine look like? I’m imagining one of those old-fashioned phrenology machines with a bunch of dangling wires.

Brent Nelson: That’s a common perception. Actually, a TMS machine looks like one of those old-school hair dryers that you’ll see in a salon. It is not all that intimidating. We also have a procedure chair where the patient sits. Then we set this helmet on their head. The patient wears a helmet with a little strap under their chin. During treatment, the machine can be a little noisy.

MP: What are the benefits of TMS?

BN: With TMS, unlike ECT, there is no memory loss, no anesthesia and only mild discomfort when people first get going with the treatment.

MP: How does TMS compare to ECT?

BN: ECT is a big shock to the system. TMS is not that. The TMS machine operates using the principle of Faraday’s Law, which, basically, is if you have a changing magnetic field, you can get current to flow through a loop of wire.

MP: How does stimulating the neurons in the brain fight depression?

BN: When people face serious depression, their brain gets stuck. It is hard or sometimes even impossible to get out of the depressive state. What we are trying to do with TMS is to increase the brain’s flexibility to get out of that stuck point. During TMS treatment, we still encourage people to continue other treatments for their depression, including therapy, medication, massage, exercise.

The studies that are being done on TMS are starting to show some nice effects. The pivotal study shows post treatment a 38 percent response rate and 31 percent remission for people who have washed out on medications.

If people kept on their mediations while getting TMS treatment, the study shows that response and remission rates go up quite a bit.

MP: How is treatment initiated in your clinic? 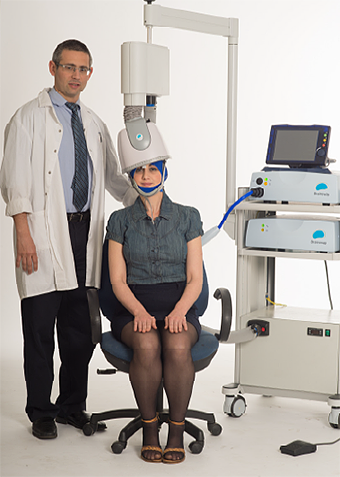 BN: In order to be treated at our clinic, a patient must get a referral from their primary doctor. This could be a psychiatrist or internist. The referring physician would need to confirm that other treatment options haven’t worked for the patient. Once we get the referral, we do a careful examination of the patient’s condition, making sure they are safe from a medical perspective to receive a course of TMS treatment. We also need to confirm that the patient would be able to commit to a full course of 20 five-day-a-week treatments. If the patient is covered under Medicare, we can get them going right away. If they are private pay, it’s a different process of arranging for payment.

MP: How much does TMS cost?

BN: I’m hopeful that someday we can make sure that everybody, no matter their socioeconomic status, has equal access to this treatment. In the past there was no insurance coverage for TMS. Now it is covered under Medicare. If you must pay out of pocket, it costs $10,000 to $15,000 per course of treatment. We want insurers to know that TMS treatment is FDA approved.

MP: What happens during a patient’s first visit to your clinic?

BN: At that point, we’ve already done the prescreening and evaluation, so on the first day, we get right to brain mapping, which is taking a series of brain measurements using the machine. We need to know exactly where the part of the patient’s brain that is responsible for their depression is located. That first meeting takes 60-90 minutes. After this initial appointment, we will be able to determine if the patient is a good candidate for treatment.

If we determine the patient will tolerate the treatment, they will then get their first 20-minute treatment that first day. After treatment, they can drive home or back to the office and conduct life as normal. They come back again for treatment the next day. With this particular device, our patients will go through a standard course of 20 treatments.

The M.D.s are always there for the initial mapping procedure. That’s the really important part. After that, we have a TMS tech who sets up and runs the procedure. At the end of each session, the M.D. will pop in to make sure it is going well and we don’t need to make any adjustments.

MP: Are there any side effects from TMS?

Because we are putting energy into the brain, another possible but rare side effect can be a patient having a seizure. Those seem to be tied to a patient’s alcohol use or a severe change in sleep. We screen for these risk factors each day before we give a person a treatment.

Another danger is that the TMS machine has a strong magnetic field like an MRI, so if a patient has metal implanted their body — a pacemaker, for example — they can’t have this treatment.

All in all, we’re talking about a pretty low rate of adverse events. There is no memory loss, no negative cognitive effects. And people are starting to show that there are a lot of positive cognitive effects from these treatments. One theory is that if you are lifting someone’s depression, their mind will clear and their memory will get better.

MP: How are your first patients responding to their TMS treatments?

BN: With the patients we are treating right now it is too soon to tell conclusively about the impact the treatments are having on their depression. They are hopeful, and it’s been exciting to bring another treatment option to people who have been struggling with serious mental illness for so long. One thing our patients have told us is they feel like they are sleeping better since they started their treatments, which has been a typical report.

We are treating a handful of people right now. They are tolerating the treatments well. We’ve had a ton of referrals and we are working through that process.

MP: Do you think this treatment will have a significant impact on the way physicians treat depression?

BN: In 20 years, the way we treat brain conditions is going to change dramatically, now that we have tools and understand to tease that all apart. This is a hopeful time.